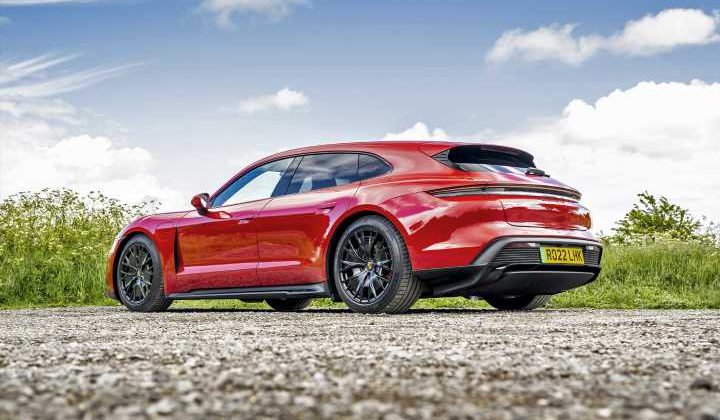 A GTS is typically the pick of the range for V8 and flat-six Porsches – what about the electric one?

Like every modern Porsche, the Taycan range is a sprawling one. Across saloon, Cross Turismo and Sport Turismo, there are now 14 models stretching from 326hp and £75k to almost £150,000 for the all-singing variants of the 625hp Turbo S. And you only need glance at the spec below to see that a vast options list also comes with the Taycan experience. The powertrain might be all new, but the electric Porsche is a chip off the old block when it comes to a buying decision – where on earth to begin?

Well, for every other model in the range, a GTS neatly straddles the gap between entry-level Porsches and those that rev to 8,000rpm or sprint to 62mph at light speed – so that’s exactly what the Taycan now has in the UK as well. The GTS sits between from 435hp 4S Sport Turismo (or 490hp with the battery upgrade) and 625hp Turbo with 517hp (or 598hp on overboost). Included as well are some subtle styling upgrades, hardware tweaks – including a ‘richer sound pattern’ for the Electric Sport Sound – and a smattering of Porsche’s Race-tex inside. So far, so very nearly every Porsche GTS of the modern era. There’s even been a circuit launch for a car very unlikely to ever end up there, as tradition dictates. Time then to finally sample the Taycan GTS Sport Turismo on British roads.

If the electric GTS apple doesn’t appear to have fallen far from the tree on paper, the point is inescapable in reality. It isn’t significantly different to any other Taycan, but there are just the right amount of lovely details to make the leap from 4S to GTS seem worth paying for. The black accents and Sport Design bodykit work as well here as anywhere else, the badges look cool, the ride height is just that bit more suggestive, and the wheels are nice… it all seems so inconsequential written down, but does make for a really smart Taycan in person. This is important when you’re being asked to pay another £20k over a 4S.

On the road, it’s a similar story. This is to say that the GTS ever so slightly improves on what was already one of the best EV driving experiences. It’s still unnerving to find such a large, heavy car boast such uncanny accuracy and precision in everything it does, and never have those traits felt more apparent than with the GTS. Whether squeezing through gaps in traffic, aiming the car into a bend or flowing from corner to corner, there’s never any doubt that the Taycan will faithfully respond to every and any input on the (very lovely) Alcantara wheel. Sat so low only furthers your confidence. A 4S would probably perform in very much the same way, though the suspicion lingers that the GTS is just a fraction sharper again thanks to its modifications – including stiffer anti-roll bars, higher spring rates, a unique tune for the air suspension’s chambers – for the suspension and steering.

Appropriately enough, this Taycan revelation comes just a day before the Turbo S lap record is confirmed. And while a saloon with a race-spec Pirelli on the Nurburgring isn’t comparable with a GTS on the B4494 and a Michelin Pilot Sport 4 rubber, there are parallels: there’s not much correction in the video, because there’s so much faith in that first input, corner speeds are high given how heavy it is, and when the tyre squeal does arrive the speed on display is a lot bigger than the prevailing calm would suggest. There really isn’t much else that drives as a Taycan does.

That the GTS can genuinely stagger on a good bit of road, cruise utterly serenely and soothe in traffic as well as hold people and stuff with room to spare does make it pretty persuasive. But not perfect, it should be said. The brake pedal still isn’t up to Porsche’s best, with a larger dead spot and longer travel than might be expected from traditional sports cars. And this Electric Sport Sound didn’t seem an awful lot different to before.

Perhaps the broader (and vaguely related) issue is an inescapable one. Pay the GTS premium for a Panamera or Cayenne, and the V6 is upgraded for a V8, with everything that switch brings in the richness and emotion of the experience as well. Pay a similar premium for a Taycan GTS from 4S and, from a powertrain perspective, you get the Performance Battery Plus as standard and acceleration that’s a little more violent. This isn’t a slight directed at Porsche specifically, as it’s one that all makers will have to grapple with in the time of the super EV: how do you justify the performance variant of an EV when the standard car is already so capably fast?

At least the Taycan’s case is stronger than most. A Panamera GTS does have that eminently likeable 4.0-litre as standard fit, though it also costs more than the Taycan equivalent that is cheaper to run, more accelerative, more agile, damn near as practical and – to these eyes at least – better looking as well. Yet nobody reading this needs reminding of just how compelling a great engine can be.

Obviously we’re nitpicking. Porsche’s first electric car is without meaningful flaw, and the GTS mostly conforms to type, making any right-thinking buyer question the need for anything faster, while ignoring anything inferior. Nevertheless, it isn’t quite the no-brainer. Without a more emotive powertrain as part of the deal (and with a 4S upgradeable to the bigger battery for £4k), it does seem like a significant amount to pay for a slightly better-looking, slightly better-driving model. Perhaps a back-to-back drive would bring out the advantages, but we’re inclined to argue that a 4S would likely be enough Taycan Sport Turismo for most folk. Leaves some budget for an old flat-six Porsche, too…