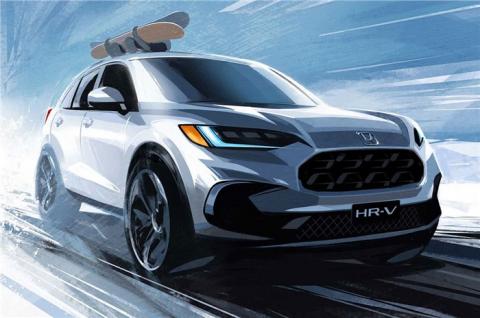 The SUV is expected to carry forward the same engine and transmission options as the Civic sedan.

Honda has previewed the 2023 HR-V via official design sketches. The new Honda HR-V is expected to be unveiled later this year and will initially go on sale in North America before being available in other markets.

The new HR-V will be underpinned by the same platform as the Civic, giving it a much longer and wider stance compared to the current model.

As seen from the sketches, the new SUV will receive a complete design overhaul. The design sketches showcase the SUV featuring a large octagonal grille up front, flanked by sleek headlamps with integrated LED DRLs and turn indicators. The front also features a sporty bumper with faux air inlets at each corner. The HR-V will also come with large wrap-around tail lights and a chunkier looking rear bumper with black cladding, giving it a rugged look.

While details of the upcoming Honda HR-V are yet to be revealed, the SUV is expected to carry forward the same engine and transmission options as the Civic sold in the American market.