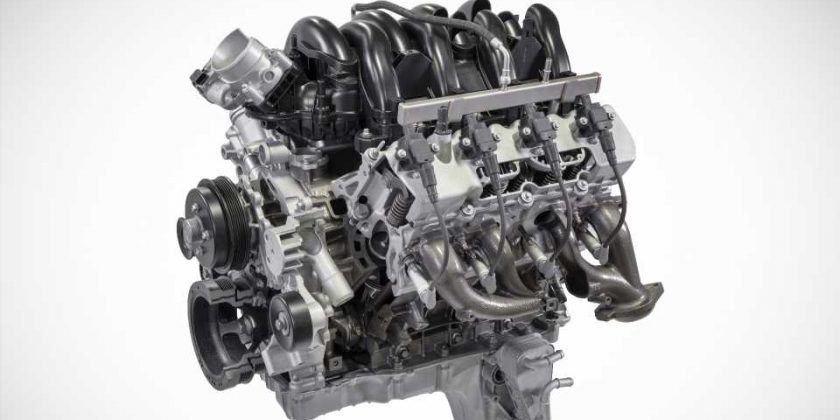 Ford just recently came back around to cam-in-block V8s with its 7.3-liter “Godzilla” truck engine, but now it appears the brand is strengthening its commitment to big V8s in another way. Based on a quote in the Windsor Star from Canadian auto union Unifor’s national president Jerry Dias, 6.8-liter power will be returning to Ford’s vehicles, particularly in the 2022 F-150 and Mustang. That’s a sharp turn from the brand’s EcoBoost strategy in years past, so what does that mean for the Blue Oval’s lineup?

Dias didn’t give any further details besides the 6.8-liter figure, which leaves plenty of room for speculation. The last time Ford made an engine with that displacement, it came in the form of a modular V10; however, a return to that gas-guzzling monster seems unlikely. It’s also improbable that Ford will make a Coyote engine that big, which leaves one likely explanation: a smaller version of Ford’s 7.3-liter Godzilla.

It’s been proven that the 7.3-liter can fit in classic and modern Mustangs. It’s 4.5 inches narrower than a Coyote 5.0-liter, and we know it can make more power than its currently rated figures of 430 horsepower and 475 pound-feet of torque. Even by cutting a half-liter of displacement, it wouldn’t be surprising to see the 6.8-liter match or exceed that of the 2021 F-150 and Mustang’s V8 in their respective applications. Likewise, the Windsor plant already builds the 7.3-liter, so sharing parts between assembly lines seems all the more likely.

As Hagerty points out, it’s fair to assume this engine’s block could be made of aluminum instead of the 7.3-liter’s hefty iron, which would be more suited for a lighter vehicle like the Mustang. Indeed, the F-150 has now transitioned into an aluminum body structure, which makes this seem more appropriate in that application, too. The Coyote engine currently found in the Mustang and F-150 is made of aluminum, so moving back to iron for this new power plant could be seen as something of a reversal.

Unfortunately, there’s no indication, at least so far, that this engine could end up under the hood of the Bronco, a product Ford is keen to boast about at the moment. At present, a 2.7-liter EcoBoost V6 is the largest engine announced for the off-roader, though there could be a surprise on the way for the high-performance Bronco Warthog. Given that it’s been testing on 37-inch BF Goodrich tires, it wouldn’t be surprising to see a larger power plant for the 4×4.

The Drive has reached out to Ford for comment and will update this article with the automaker’s response.