If all is well with your vehicle, you probably don’t think too much about how your car smells on a daily basis. We’re all familiar with the smell of a new car, after all, but beyond that, the topic doesn’t come up all that often. However, that’s not by accident; it’s down to the efforts of people like Nissan’s Ryunosuke Ino, who serves as the brand’s very own “smellmaster,” as reported by Drive.com.au.

Ino’s job is to inspect Nissan vehicles for their distinct aroma, making sure that new cars shipping out have an acceptable, even pleasant, smell about them. Dash plastics, leather, and other materials can all add their own characteristic scent, and in the closed environment of a car interior, they can be very noticeable. Thus, it’s key to ensure that these smells are not offputting to avoid a negative impact on passenger comfort. It’s certainly an unusual job, as Ino readily admits. “We evaluate various smells in all models.” “People sometimes say ‘I didn’t even know there was a job like this!'” adding that “people are surprised at Nissan’s attention to detail.”

The job requires a keen nose; Nissan has a certification test for its smellmasters based on recognizing different scents. Preparation is key to doing a good job, too. “The day before checking a vehicle, I avoid eating food with a powerful smell, such as garlic,” says Ino.

Heat can cause materials to outgas more, so heat lamps are used to bring a vehicle up to higher temperatures during testing. An inspection involves sitting in the car as a driver or passenger would, and smelling various parts of the car to determine their odor. It’s important to open the glovebox and other compartments to ensure they’re not trapping any undesirable smells, too. 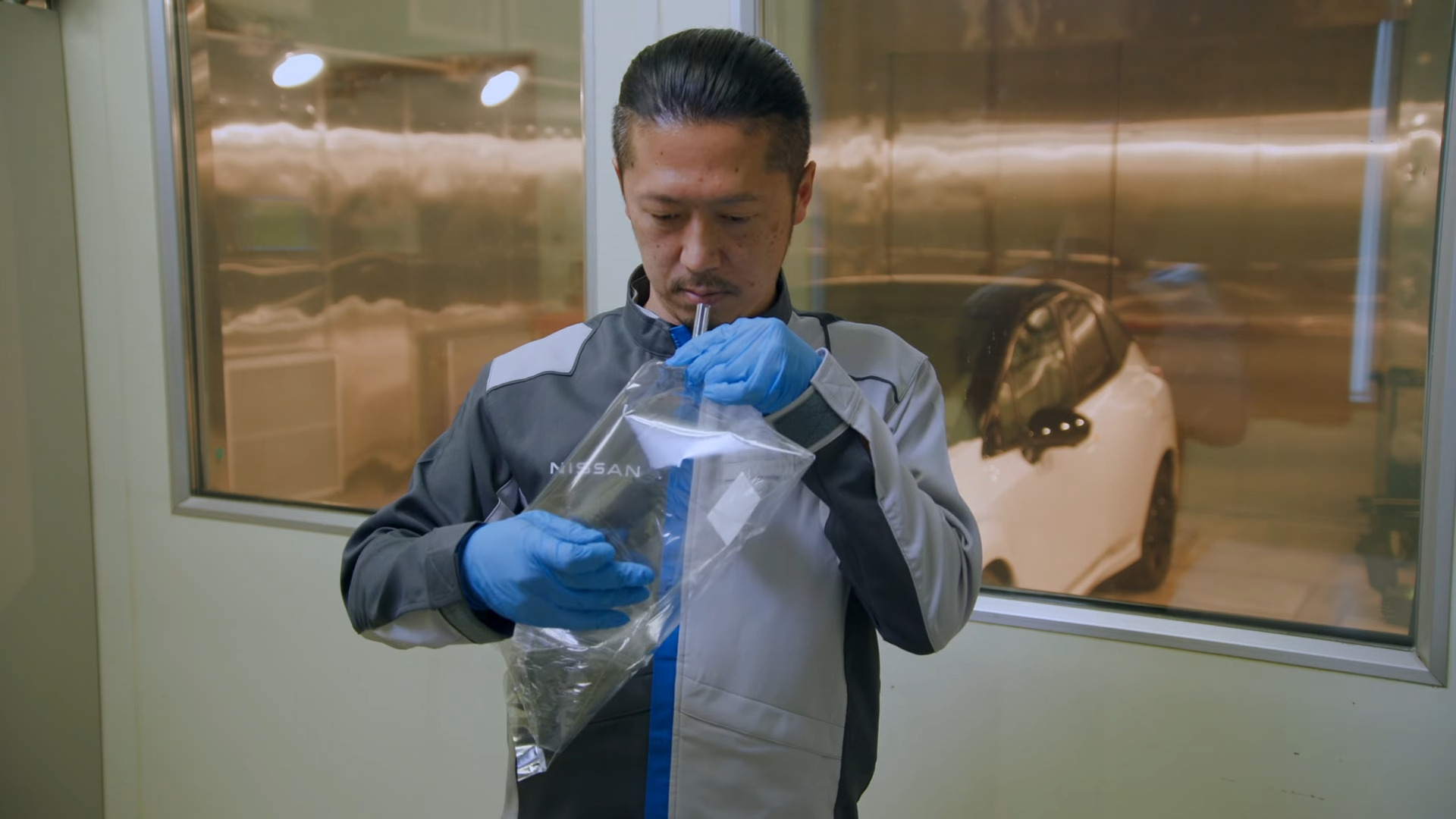 Getting a smell of each part of the interior is important, too. “Sometimes, the front and rear seats are made with different materials, so it’s very important to check each component individually,” Ino advises.

If the smell of a new car isn’t up to scratch, the first step is to figure out which component is responsible. Then, analysis of the material can be done and supplier information checked to understand the problem and find a fix. Materials may be changed where necessary to ensure a new Nissan smells as good as it can.

Ino himself is responsible for setting Nissan’s global smell standards, but notes that each region has different tastes as represented in customer feedback. Regional smellmasters around the world also play a role, making sure the company’s products are suitable for their local markets.

It’s not something unique to Nissan; we’ve reported before on how Audi maintains a similar team of professional sniffers as well. It might sound frivolous, but a lingering bad smell can easily ruin any car ownership experience.

In our modern society, as it turns out, a small handful of dedicated “nosers” get up and go to work each day so we can all drive around in relative nasal comfort. For that, they deserve our thanks.