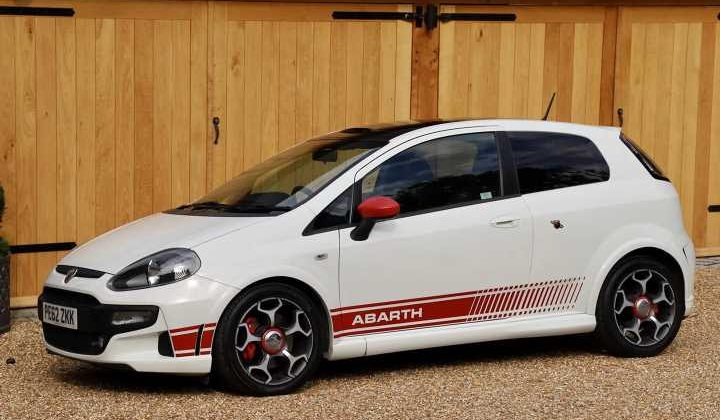 We know it can be demoralising shopping for a used car right now. Everything is more expensive than you think it might be. Or it seems like nobody ever bought the really interesting cars. Or if they did, it’s in one of the boring specifications. There are still worthy cars out there, however – you just need to know where to find them.

Given what Abarth still charges for a 695, and given how rare the Abarth Punto was – not to mention the apparently flawless condition of this one – it doesn’t feel like bargain territory. But this 2013 car, with a low mileage of just 60k, a great spec that includes a rare panoramic roof and a recent cambelt, is for sale at £9,995. (Or potentially £8,995, depending on which bit of the advert you read.) This used to be the price where Britain’s cheap new cars kicked off, but now even a Dacia Sandero is from £12,595. So the Punto might be even better value than it seems. After all, have you seen what people are asking for Clio 200s and supercharged Minis?

Alright, so the Abarth Punto doesn’t have quite the cult reputation of those two which explains the relative affordability. But it was a decent little pocket rocket in its own way if overshadowed somewhat by the pitch-perfect 500 launched about the same time. The Punto didn’t try to reinvent the hot hatch, and therefore delivered some reassuringly old-school thrills: it was a faster, firmer, and friskier version of a popular Italian supermini. With scorpions daubed everywhere. Sometimes things don’t need to be any more complicated than that.

For the Punto Evo era, there was more power (up to 165hp), a new look and some chassis tweaks, which reports tended to prefer over the pre-Evo cars. It lacked the raw driver focus of something like a Clio 200, yes, but tended to be better received from an enthusiast perspective than the 500. But then it didn’t look so cute, so fewer sold.

If you can find an Abarth Punto nowadays, it tends to be a lower mileage and cherished car like this one, discerning owners jumping on something special and keeping it well. It would be fair to say that not all 500s enjoyed the same treatment. This Evo was sold by the vendor to the previous owner five years ago, which is always nice to see, and there’s abundant Abarth service history alongside a recent independent inspection. The pics point to a loved car, too, with just a bit of seat bolster wear to give away its age. That and a manual gearbox in a hot hatch, of course.

With the Punto badge no more in the UK and Abarth continuing to forge ahead with just the 595 and 695, it seems unlikely that the larger car will ever have quite such a fanatical following. Hopefully, that keeps it affordable at least, rather than a bun fight erupting for Rivale this or Competizione that. Because as a rare, interesting, fun and fast Italian hot hatch, you could do an awful lot worse than an Abarth Punto.