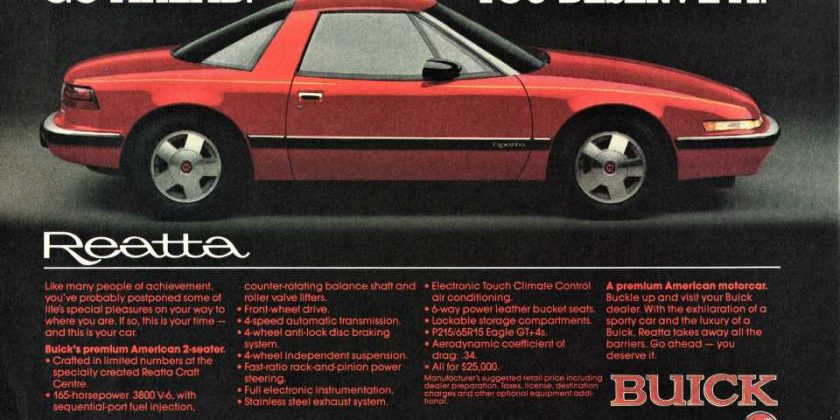 With Buick now divorced from Opel and building a strong electric portfolio for China based on GM’s BEV2 platform, it’s time for us to take a look at the era leading into the 1990s, when front-wheel drive two-seater grand tourers like the Buick Reatta could serve as low-production halo cars for GM’s historic brands.

Welcome to Ad of the Week! Vintage ads are fun. They come from a time when enthusiasts gathered their knowledge mostly from print magazines, TV and radio ads, and billboards sized to fit several land yachts. We’ll be taking a deeper look at one every week to explain the claims, context, and how that all worked out in reality.

GM’s E-body coupes got smaller for 1986 in exchange for their unibody construction. Buick soon had to learn that its V6-powered seventh-generation Riviera wasn’t going to break any sales records, while at the same time, its engineers took multiple trips to Japan, England, Spain and Portugal to develop a new range-topping model for the brand, with most of the work done at GM’s British subsidiaries. The car’s completed assembly line was then shipped back to the Reatta Craft Center in Lansing, Michigan, only for Buick’s first production-bodied prototype to be ready by December 1986.

Using a transverse 3.8-liter Buick V6, the Reatta hit the market for 1988, which also happened to be the final year of the Pontiac Fiero GT, a mid-engine car with a 2.8-liter V6, as well as a new multilink rear suspension cooked up with the help of Lotus Engineering. While the limited production 1988 Fiero GT was priced just under $15,000, the Buick Reatta was launched at $25,000. Regardless, General Motors hoped to sell 20,000 units a year. The public bought 21,751 in four years, including the 2,437 ASC-designed convertibles in 1990 and 1991. To justify that price tag, and convince its customers that other E-bodies like the 1988 Oldsmobile Toronado Troféo had nothing on their “premium American motorcar”, Buick hit the ad pages with all the info an enthusiast could ask for. Even if most readers had no idea how the aerodynamic coefficient of .34 would compare to their cars’, or the most brick-like vehicles they could think of, perhaps the US Army’s Humvees.

Buick wanted people to believe that regardless of the cost, they deserved to tread themselves with their front-wheel drive halo car. Everything about it oozed luxury: The 165-horsepower V6 with its sequential-port fuel injecting, counter-rotating balance shaft and roller valve lifter. The four-speed automatic transmission and the independent suspension with ABS in all corners. The standard six-way power leather seats, lockable storage compartments, and most importantly, Buick’s latest touchsceen-triggered Electronic Touch Climate Control.

If you were indeed a person of achievement who postponed some of life’s special pleasures on your way to where you are, the Buick Reatta, as well as its convertible sibling from 1990 could make up for all those pleasures right until GM decided to axe the model in 1991. Customers had to wait until Buick’s next convertible for 25 years, after which they got an Opel Astra. It’s just hard being Buick.