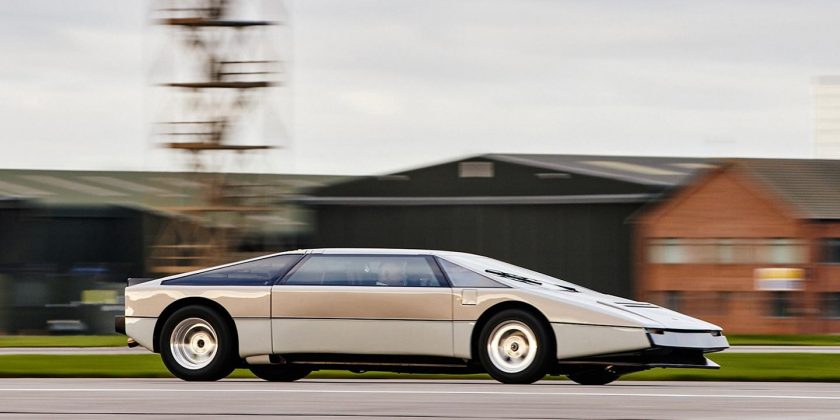 If you thought that there’s nothing more British than James Bond in an Aston Martin, you’re wrong. We’ve checked and officially the most British thing ever made or born (yep, that includes the Queen) is the Aston Martin Bulldog. For those that haven’t a clue what we’re on about, the Bulldog was Aston’s attempt to claim the crown of the first production car to hit 200mph.

The car had the same 5.3-litre V8 that you’d have found in any Newport Pagnell car of the period, only here it’s running two turbos and estimated to be producing somewhere in the region of 700hp and 500lb ft. That brute force combined with a drag coefficient of 0.34 – courtesy of its slippery, elongated-Esprit profile – meant a theoretical top speed of 237mph, but in practice it managed ‘only’ 192mph in 1980, before the project was canned by then chairman of Aston Martin Lagonda, Victor Gauntlett.

As we reported back in January, Gauntlett’s son, Richard, has been heading the restoration of the Bulldog on behalf of its current owner, Phillip Sarofim. The work was tasked to Classic Motor Cars Ltd (CMC) and due to be completed by the end of this year, and, true to its word, the car is now complete. Sarofim shouldn’t have cause to quibble at the finish, either, because the Bulldog has just won the Royal Automobile Club Restoration of the Year Award and CMC took the prize of Specialist of the Year at the Octane Historic Moring Awards.

Unlike many one-off pieces, which invariably end up sitting in a private collection or at best a museum, the Bulldog still has the spirit its name suggests, because on Saturday it achieved 162mph at Royal Naval Air Station at Yeovilton in Somerset. This was the first time that the car has been driven at speed in over 40 years, and it was the initial shakedown session as the car is geared up to go for that 200mph target.

The original plan suggested that it would be Aston Martin factory racing driver Darren Turner to pilot the car to 200mph but last week CMC boss Nigel Woodward was at the wheel. He commented: “There is still much to do but Saturday’s session not only validated the car but also provided a lot of very useful data. The fact that without trying, and in the teeth of a 50mph crosswind, we sailed through the 160mph mark in only three-quarters of a mile, at reduced boost and on partial throttle, says much. It was only a lack of bravery on my part and the fact that we were still evaluating the car that prevented us going faster.”

And as he was talking about doing more than 160mph in a 40-year-old car with Storm Arwen adding to the high jinks by trying to blow him off course. Perhaps the second most British thing of all time is the amount of self-deprecation going on in that last sentence. You gotta love it. We salute you Nigel: full steam ahead and best of British to all involved.