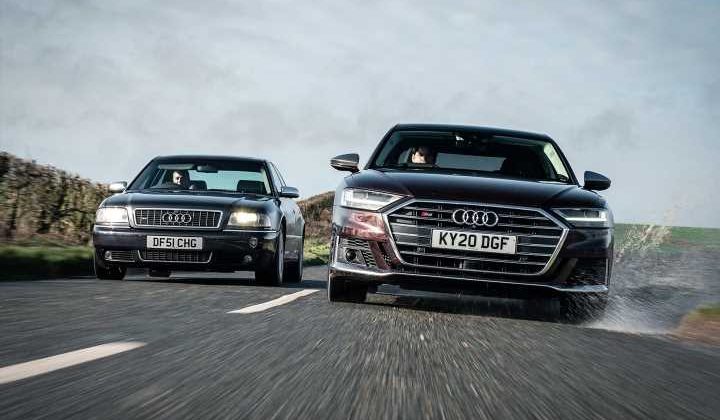 It's now 25 years since the Audi S8 was introduced, so what's changed in a quarter of a century?

In a blatant attempt to put the competition for 'most outrageous first sentence of 2021' out of reach for any other PH writer, I'm going to kick off by likening the Audi S8 to the Mazda MX-5.

Granted, the link isn't obvious. The S8 weighs at least twice as much and has twice the driven wheels and more than twice the power. Yet both these long-lived dynasties have an increasingly rare quality in common: single-minded consistency. Mazda has always known the MX-5's minimalist magic would be ruined if it allowed the roadster to get too big or complex, which is why its dimensions and mass have remained impressively consistent over the years. The S8 carries a similar degree of self assurance; many of the basics have barely changed between the original and the current model. Park a brand new D5 generation S8 next to an original D2 and, yes, there are plenty of differences – but also very obvious similarities.

The biggest of these – badum, tish! – is size. By the standards of the mid-1990s the D2 was a road-going battle cruiser, and more than two decades later it is still properly XL. The 2021 S8 is longer, bit only just; the new car's 5179mm length represents an increase of just 145mm – or three per cent. Most long lived automotive families suffer from the sort of generational spread you normally witness when watching Gogglebox – a Mk8 Golf GTI is a full 550mm longer than a Mk1.

While dimensions are obviously shared with the regular A8, much of the rest of the S8's specification seems to have been passed down on tablets of stone. With the exception of the D3-era's V10 each generation of S8 has been powered by a brawny V8 and sent drive to each corner through a torque converter auto (in the UK at least.) Every S8 has also been built around the same mission of combining helicopter-rivalling cross country pace with private jet luxury. It's the confidence of having found a niche that works, or maybe of getting something right first time.

The 2001 D2 you see here is an old friend, having been the basis of a PH Heroes story back in 2018. It belongs to Audi but, unlike many members of the company's heritage fleet, hasn't spent its life in cotton wool: an odometer reading that ticks over to 160,000 during our time with the car is proof of a long, interesting life. It's a late car, meaning it has the more powerful 364hp engine that came with the facelift, but even parked next to its brand-new successor it doesn't lack presence.

It has plenty of olfactory character too, with the distinctive odour or the very leathery leather that German manufacturers used at the time. The heritage car's wooden trim has the orangish Oompa Loompa hue that Audi seemed particularly fond of. The abundance of buttons on the centre console now seems a strange contrast with the lack of switchgear on the face of the steering wheel – this containing just basic audio repeater controls and the switches for manual gear selection. This D2 is late enough to have received a fully graphical sat nav system complete with a blocky display screen; earlier examples got a system that relayed guidance exclusively through voice instructions and junction pictograms. I'm pleased to see the clock is set to 1999, and soon confirm that the rest of the car is.

Despite the D2's substantial size, packaging isn't particularly impressive. The seats are comfortable, although the H-point feels high and slippery leather denies much lateral support. But the driver's footwell is squeezed by a sizeable bump required to house the huge gearbox. Rear seat room is also surprisingly limited for a car based on what was meant to be Audi's range-topping limo; it's a good thing the S8 was aimed at those who wanted to drive themselves.

Swapping directly to the D5, and being denied several intermediate stages of evolution, feels like a culture shock. It's like passing from the bridge of the USS Enterprise – as in the 94,000 ton aircraft carrier – and onto the command deck of Captain Kirk's starship. The level of tech is predictably off-the-scale when compared to the earlier car – getting on for a third of the dashboard is either a display screen or a touch-sensitive panel. But the D2's clubroom charm is also largely absent; even changing cabin temperature on the new car is done by the lower screen. This is the brave new future, of course – one that will likely soon be universal. But it does highlight the obvious issue for car designers that touching cold glass will always lack the tactile pleasure of milled metal or even just nicely moulded plastic. And new S8 buyers are likely to also feel a bit short changed when they realise just how similar its cabin architecture is to the much cheaper A6.

Performance expectations have also shifted dramatically in a quarter of a century. When it was new the S8 was one of the fastest saloons on the market, and although still respectably rapid it is obviously in a different league to the modern version, a contrast highlighted by the chasm between the D2's and D5's acceleration numbers. The new car's 3.8-second 0-62mph time is close to half the 6.6-second time for the first S8.

But the older car wins on character, the naturally aspirated 40-valve engine making a subdued wuffling noise low down and gaining a pleasingly hard-edged exhaust note when worked hard. Not that this is particularly easy to do – the slushy automatic prefers an easy life and, even under bigger throttle openings, tries to keep the engine somewhere near the 3,500rpm where peak torque arrives. It takes a proper accelerator stamping to persuade the transmission to hold its ratios and let the engine rev out – or to take manual control of ratio selection, although with a comical one-pause-two delay between requesting a new gear and getting it delivered. A manual gearbox was offered in some markets, and I'm soon wishing it had been brought to the UK.

The D2 is surprisingly soft, too. Or perhaps soft in the wrong places would be a better way of putting it. Suspension settings are firmer than those of the regular D2, and there is an edge to the way it deals with rougher surfaces. But on some of the bumpier bits of West Berkshire we used for the photoshoot it was soon feeling floaty and under damped. Harder cornering also produced noticeable body roll, with the effect of this exacerbated by the slidy seats.

Yet speed still comes easily, and the first S8 is almost as good at creating double-take speedo numbers as any of its successors. Only wind whisper from tired seals disturbs the tranquility of the cabin – the side windows have double glazing – and generous sound deadening keeps road roar to a minimum. Grip levels are still respectable, this one now rides on non-period Kumho Ecstas, but these found good adhesion on cold, wet roads – although with a handling balance that is always front biased. Watch the S8's famous cameo in Ronin and you'll see that even with the considerable skills of Jean-Claude Lagniez's stunt team the only on-camera oversteer is clearly delivered by a rear axle line-lock.

One thing the D2 does possess, against expectations, is steering feel, certainly by the standards of 2021. It wasn't famed for an intimate sense of dynamic connection when new, but the world has moved on; even a not especially communicative nineties helm now gives the sort of low intensity feedback that electric assistance just filters out, reporting on road surface changes as well as fading grip levels at the front axle.

No surprise that the new S8 manages to be both massively faster and considerably more composed – yet it has clearly been designed around a very similar list of priorities. Despite being turbocharged the 4.0-litre V8 responds much more keenly than the old 4.2, thanks to its smarter and faster shifting eight-speed auto. Acceleration feels relentless, the S8 gathering pace faster than many senior sports cars and with an impressive amount of V8 noise allowed to reach the cabin, at least some of which is digitally augmented. The D5 is louder than the D2 under full throttle, but lift off and it becomes near silent thanks to active noise cancellation.

Pretty much every measurable metric has been significantly improved in the new S8: refinement, grip levels, chassis responses (thanks to the combination of active rear steering and a torque biasing differential) and, most noticeably, ride quality. The D5's combination of air springs, active dampers and an electromechanical anti-roll system allows it to do a convincing magic carpet impression when compared to its predecessor, much more pliant over bumps but also keeping its greater mass under much tighter control. It's not even close to being close – the new S8 could likely drop its predecessor without even realising it was being chased.

Yet except to the mind of a number-focused German engineer, that doesn't make the new S8 a better car, certainly in the context of the different worlds both were launched into. The D2 S8 was groundbreaking, a four-seat Grand Tourer that combined V8 performance, all-wheel drive and self-shifting gears in what was then a unique combination. In those pre-SUV, pre-R8 days it was also the flagship for the whole range, and proof of the ability of the A8's cutting edge aluminium space frame to sharpen its power-to-weight ratio further.

The new S8 has moved everything on, but the very success of the original has turned much of its specification generic. When the D2 came out the BMW M5 was rear-wheel driven and had a manual gearbox; now the entire segment has standardized on the Audi's recipe of a V8, all-wheel drive and a torque converter auto. By ditching the aluminium space frame core structure Audi has also removed another point of distinction. The modern S8 is a technical masterpiece, but not one that offers any radical mechanical distinction over its obvious alternatives.

Comparing new with old is always hard, and it's certainly difficult to make a rational case that a well-used 2001 S8 is a better proposition than a brand spanking 2021 example, not least because it is worth twenty times as much. If I had to choose between them to pursue a Citroen XM in the south of France then I'd pick the D5 every time; the chase would have been over in half the time. But turn the question to that of which is more historically significant and characterful and it's not nostalgia, or my love of squishy nineties leather upholstery, which makes me confident the original is still the best.