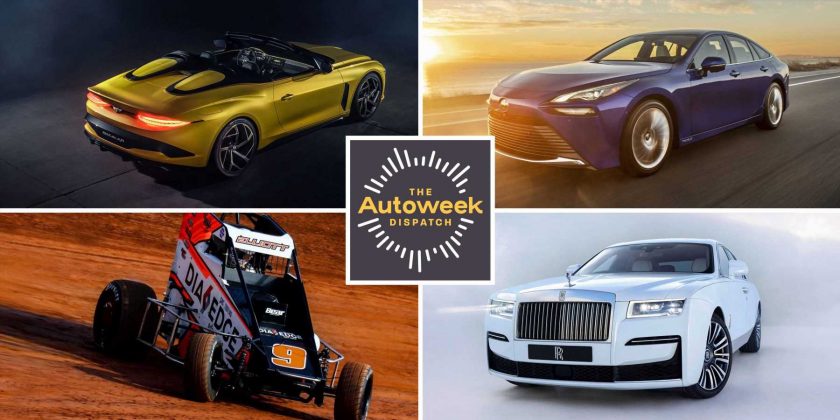 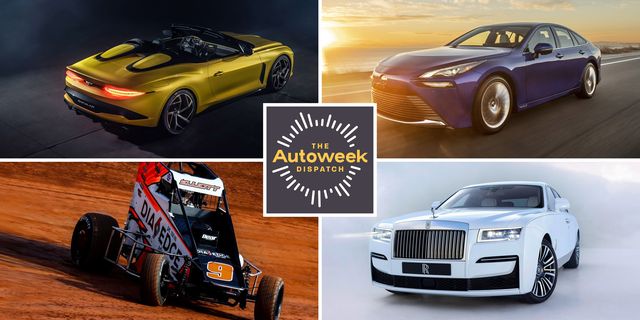 The Dispatch is a little earlier this week due to the holidays. Here’s what’s happening in the car world:

FROM THE EDITOR’S DESK

Bentley has begun running its Mulliner Bacalar through a test and durability program, including making sure the 200 mph+ top speed is legit. The limited-production run starts next year. We were curious about how the car was coming along and learning more about what the Mulliner division is all about. Mike Duff, our man in Europe, dug around and filed the following report:

Bentley is old enough to have delivered once naked engine and chassis to the coachbuilders who would fit elegant bodywork to a customer’s specification. Now its in-house dream-delivering Mulliner division is set to do the modern equivalent, making substantial changes to the bodywork of existing models while leaving the mechanical package substantially unchanged. The result is a car to appeal to those in search of something rarer and more precious, but without the cost of a new platform or powertrain.

The Bacalar is the first of these. It shares its W12 engine, all-wheel drive system and sub-structure with the Continental GT Convertible, but has been given new aluminum and carbon fiber barchetta bodywork that looks almost entirely different. (Of external components, only the windscreen and doorhandles are shared.) But it won’t be the last, with Mulliner boss Tim Hannig admitting that the limited-to-12 production run, all of which have been sold for $2 million, is a “toe in the water” for future models, some of which will be more ambitious in scope.

“We are absolutely not planning to do one and then stop,” he told Autoweek, “this is a very serious start into a forgotten niche of the market.”

Hannig admitted that his team briefly considered making the Bacalar even more exclusive, as a one-off for a single collector, something that would have required a much steeper pricetag. “We spent around £5m [about $6.6 million] engineering the Bacalar before we’d made a single part,” he told us, “we would have had to sell the finished car for at least £7.5.” That’s nearly $10 million at today’s exchange rates.

Hannig told us that the final run of 12 was deliberately conservative, suggesting that future coachbuilt projects will have larger runs (and that Bentley isn’t going to follow Lamborghini’s lead with cars like the limited-to-three Veneno coupe.) But they will never become commonplace.

“When you increase volumes people’s excitement goes away,” he said, “I don’t think we’ll ever get to 150, let’s say.

“We’re in this for the long term and we need it to be sustainable.”

Rich guys don’t like to share. That’s long been one of the biggest issues for the ultra-luxury market – making cars that combine both appropriate levels of exclusivity but also profitability. Now that another one is set to get in on the act, has there ever been a better time to be a hard-to-please billionaire?

While most of the rest of the automotive industry is moving toward EVs for an emissions-free tomorrow Toyota continues to claim that hydrogen is going to be the way forward. Or at least a large part of the way. The company says it is committed to fuel cell vehicles as a part of its future and that there is a market as the infrastructure continues to develop. To that end the company just revealed the second-generation of its Mirai hydrogen fuel cell-powered car. The 2021 Mirai rides on a shorter Lexus LS platform, has up to a 402-mile range (30-percent better than the first-gen Mirai), seats five instead of four, and costs about $9,000 less with a $50,455 starting sticker before prodigious incentives.

The hydrogen fuel cell infrastructure Toyota refers to could actually be easier to build for aircraft than for cars, and Airbus recently revealed three zero-emission aircraft concepts that could see service in a decade and a half or so. Codenamed ZEROe, the three concepts are commercial aircraft of different sizes. One is a traditional midrange turbofan design meant to carry 120 to 200 passengers with a 2,000 nautical-mile range, perfect for domestic flights within the U.S. The second one is a smaller turboprop aircraft designed to carry up to 100 passengers with a 1,000-mile range and the third is also meant for midrange routes and able to carry up to 200 passengers. All three concepts use hydrogen as the fuel and Airbus hopes to put one into production by 2035.

Mercedes-Benz now says it is planning six new EVs by 2022. EQA and EQB (small and medium sized) electric SUVs are scheduled to debut in 2021, along with EQE and EQS (medium and large) sedans. The EQE SUV and EQS SUV models (medium and large) land in 2022, due to be produced in the U.S. Benz eventually plans to offer an EV in just about every major segment from the smallest to the largest.

NASCAR Cup Series champion Chase Elliott isn’t exactly sitting around polishing his trophies this winter. His off season so far has included a third-place finish in the Snowball Derby Super Late Model race at Five Flags Speedway in Pensacola, Florida and his plans include the Chili Bowl Midget Nationals and IMSA’s Rolex 24 at Daytona. To tune up for the Chili Bowl Elliott just raced a Midget car for the first time, finishing third and fourth in 30-lap and 40-lap features at Millbridge Speedway in Salisbury, North Carolina. He competed against the likes of defending Chili Bowl winner Kyle Larson, dirt racer turned NASCAR star Chase Briscoe and USAC Midget ace C.J. Leary. Not a bad debut! The always crazy Chili Bowl has 209 cars entered, and runs from Jan. 11-16 at the Tulsa Expo Raceway in Oklahoma. Coronavirus restrictions include 25 percent capacity in the grandstands and the pits. For the Rolex, Jan. 30-31, Elliott teams with Felipe Nasr, Pipo Derani and Mike Conway in the Whelen Engineering Cadillac DPi-V.R.

Formula 1 Constructors’ runner up Red Bull has signed Sergio Perez for the seat alongside Max Verstappen for next season. The deal’s length was not announced. In Perez Red Bull is getting the best driver available in the 2021 driver market. He finished fourth in the F1 Drivers’ championship this year despite missing two races after testing positive for COVID-19. Perez replaces Alex Albon, who finished 7th in the drivers’ points. He’s staying at Red Bull as a reserve and test driver.

Hoping this is a spoof but…posted on the Ford Mach-E Club Forum it looks like some woodgrain graphics for your Mustang Mach-E might have hit the Ford accessory website earlier than expected. I’m not kidding. They’ve since been removed from the site, but if they return, they’ll set you back a bit more than $200. Here’s hoping it’s all just an elaborate prank.

On this week’s episode of Quick Spin our Mark Vaughn puts the latest Ghost through its paces. The new car rolls (get it?) on a new platform and has a sophisticated suspension setup using cameras to help predict road conditions. Vaughn walks you around the new Rolls and takes you for ride and talks about his thoughts with host Wesley Wren. Tune in here, on Spotify, Apple Podcasts, Stitcher or wherever podcasts are played.

QUOTE OF THE WEEK

“More than anything else, I’m looking forward to the challenges. This is going to be really hard and that’s what I’m most excited about — doing something that’s different. I’m by no means saying I’ve figured everything out that I’m doing now because there’s always something to learn, but I do want to try something new and this is a great opportunity.”

—Chase Elliott, talking about his running in the upcoming Chili Bowl Midget Nationals and the Rolex 24 at Daytona.

That’s it for this week. As always we’re on the case this weekend, monitoring and reporting on automakers’ and sanctioning bodies’ latest happenings. We’ll continually update the site of course — you’ll know what’s happening when we do. Check back often and have a safe, happy and healthy holiday!

Thanks for reading Autoweek and please stay safe.