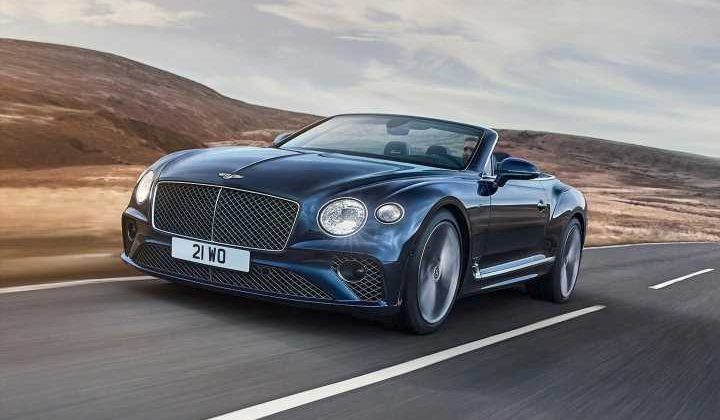 Want to turn up to the pub in style? New drop-top Speed is the breezy way to do 659hp

Surely it’s no accident that the launch of the Bentley Continental GT Speed Convertible coincides with the opening of daffodils and beer gardens. There are few better ways to enjoy spring sunshine than from the cabin of a Crewe-built 659hp cruiser. Like the coupe that landed last month, the Speed Convertible gets 6.0 litres of twin-turbo W12 and eight gears, an electronically controlled limited slip differential and all-wheel steering. Only now with more access to a) engine note, b) sky.

Thanks to the structural challenges presented by turning coupe into a convertible, the halo rag-top Bentley follows the form of its lesser variants by being a tenth slower to 62mph. But at 3.7 seconds, and with 664lb ft of torque to keep things moving along, you aren’t going to notice the deficit. Most impressively, top speed is unchanged at 208mph, although that number presumably only applies when the fabric’s overhead.

Bentley claims the Z-fold roof is the most advanced of its kind. At up to 30mph, it can be deployed or stowed in 19 seconds, and with sealing system improvements and acoustic treatments, it is said to deliver a three-decibel reduction in overall noise levels compared to its predecessor at cruising speeds. In fact, the manufacturer says the current generation convertible is as hushed as the last coupe.

Elsewhere, it is the inclusion of 48-volt anti-roll technology, the eLSD and standard all-wheel steering that ought to ensure physics-defying handling. Given Bentley’s previous achievements in the roof-removing arena, we’re not expecting much of a drop-off in lateral performance for the convertible. And even if there were, precious few GT Speed Convertible owners are likely to be thrashing their cars on track anytime soon, no matter how inspired they are by Fastr’s recently unveiled Pikes Peak remake.

The convertible’s cabin is mostly carried over from the coupe, with an Alcantara-wrapped steering wheel and a unique blend of hide and Alcantara on seats and door cards. Also retained are the exterior’s tinted grilles and, of course, Speed badges, as well as door sills that display the model logo. Customers are also offered a choice of three finishes to for the variant-specific 22-inch forged alloys, along with the usual variations of body and roof colour themes. This being the Speed, though, there are only eight options for the former and seven for the latter. That should reduce the chances of anybody ruining the range-topper with something garish.

It’s early days so pricing isn’t out yet, although estimates place the coupe at about £180k, and the drop-top will obviously command a premium over that model. The Speed Convertible remains as aspirational as ever, then – but for those with deep enough pockets, there is nothing finer for negotiating the gravel carpark of your local gastropub. Thank goodness for neck warmers, eh…