On paper, the new midengine Chevrolet Corvette C8 and Porsche 911 GT3RS should be close in a street fight. The 911 gets the nod in horsepower, 520 hp to 495 hp, but the Corvette kills it in torque (470 lb-ft to 346 lb-ft). They both put power to the rear wheels via a dual-clutch transmission; the Porsche gets a seven-speed, the ‘Vette an eight.

As for curb weights, the Corvette comes in at 3,366 pounds dry, call it 3,500 with fluids and gasoline. That gives it a 7.07 weight-to-power ratio, lower is better. The Porsche carries around 3,318 pounds and gets a ratio of 6.38 pounds per horse. 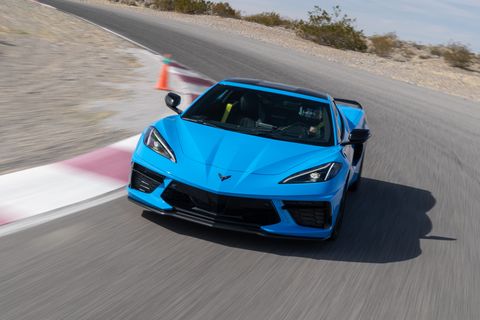 Both have engines behind the driver and both are fit for track duty right off the dealership lot — though the Corvette gets a slight camber adjustment before the excursion.

On the track, our Corvette driver hangs with the Porsche around corners and loses just a touch in the straightaways. He sticks with him for about 8 minutes before losing him in traffic, but he catches back up, shortly. Lots of this has to do with driver, tires and a ton of other things, but it’s still fun to watch.

Who’s the eventual winner? You’ll have to watch to find out, but really, if you enjoy fast cars going fast on a track, we all are.