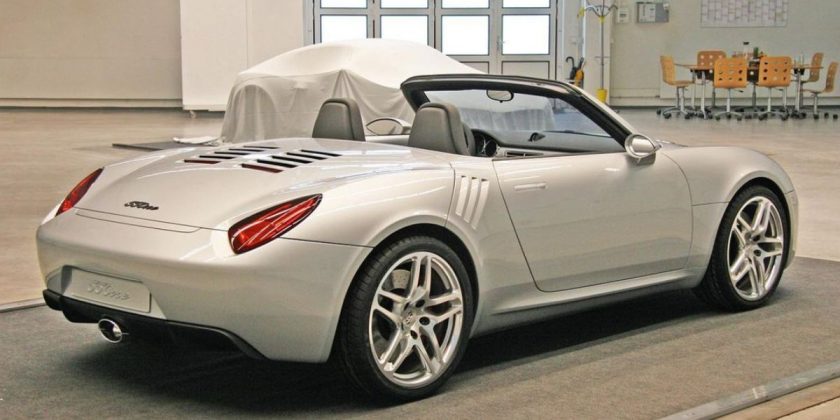 A couple of months ago, Porsche stunned us all by revealing no less than 13 previously unseen concepts. It seems the German company has plenty of other designs left up its sleeve, as evidenced by this pretty little number. It hasn’t been divulged by Porsche itself, though, rather designer Walter De Silva.

De Silva, whose CV includes the first VW Golf 6 and the Alfa Romeo 156, posted three images of the ‘550one’ on his own Instagram account. Created at the behest of then-VW Group boss Ferdinand Piech in 2008, this roadster was intended to be a modern-day recreation of the 550.

The most famous owner of the original 550 was, of course, James Dean. The actor, who had ‘Little Bastard’ painted on the rear deck, died aged just 24 when his 550 hit another vehicle in 1955. Dean’s nickname for the car stuck and is even noted by De Silva in his Instagram posts.

Porsche revisited ‘Little Bastard’ 11 years later through the Vision Spyder, one of the aforementioned 13 concepts revealed in November.

As for the 2008 car, it looks to be based on a 987 Boxster, making it mid-engined, just like the original. The interior deviates significantly, however, with a unique dashboard and steering wheel design, plus a lovely gated manual, perhaps inspired by the De Silva-designed first-gen Audi R8.

In a story about this long-rumoured car posted last year, Italian publication Quattroroute reported that in the end, Porsche wasn’t interested in splurging money developing something that occupied a similar space to the Boxster. Instead, investment went towards the creation of the wildly lucrative Macan crossover.