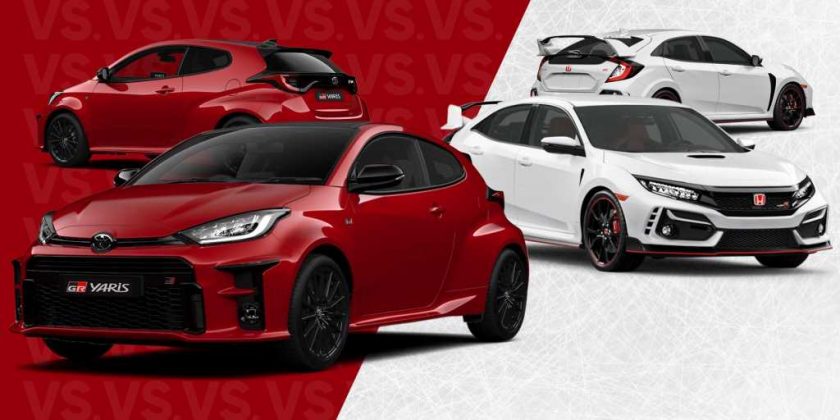 Volkswagen invented the hot hatch, launching the Mk 1 Golf GTI in 1976, and it has honed and refined the formula ever since. Like most Japanese automakers, Honda and Toyota have toyed with the hot hatch genre, but these companies’ enthusiasm for it has waxed and waned over the years, tugged by seemingly eternal internal debates as to whether building affordable fun-to-drive performance cars is a distracting indulgence for a manufacturer of practical, efficient, mainstream vehicles.

It’s an existential argument that’s never seemed to bother Volkswagen. The new eighth-generation Golf GTI has the same endearing balance of performance, handling, and price as the original. By contrast, the mere fact the 2020 Honda Civic Type R and 2020 Toyota GR Yaris exist at all suggests we’re seeing another high-water mark in both automakers’ hot hatch anthologies. If history’s any guide, though, the tide will eventually recede, once more revealing solid and sensible products, such as the CR-V and RAV4, as the true bedrocks of the Honda and Toyota brands.

But the Civic Type R and the GR Yaris both are here, and here now (although sadly we won’t get the GR Yaris here in the United States). So, let’s enjoy the moment and ponder: Which is the hotter of these Japanese hatches?

Under the Hood: Tussle of the Turbos

The Civic Type R and GR Yaris each have small-displacement turbocharged engines mounted across the engine bay. Unexpectedly, perhaps, it’s the Honda engine that’s the more conventional of the two. Codenamed AP4T, it’s a 2.0-liter VTEC twin-cam four-cylinder that’s actually made in the good old USA, at Honda’s engine plant in Anna, Ohio. It shares its architecture—and more than a few parts—with the 2.0-liter engine that powers the Accord 2.0T, where it produces 252-hp and 273-lb-ft of torque.

In Civic Type R trim, however, a bigger turbo and more aggressive tuning boost outputs to 306 hp and 295 lb-ft of torque, peak power occurring at the same 6,500 rpm as the Accord engine, with peak torque arriving 1,000 rpm later, at 2,500 rpm, and sticking around until 4,500 rpm, 500 rpm higher. It’s one of the most power-dense four-cylinder engines in the business, pumping out 153 hp per liter.

Why three cylinders? “We preferred this engine due to its light weight and compact size,” development project leader Atsunori Kumagaya said. “It’s simple to install, and the lack of exhaust gas interference made it easier to obtain power.” The G16-GTS is the smallest and lightest turbocharged 1.6-liter mill in the world, and the most powerful three-cylinder production engine ever made.

The Civic Type R engine is, like most other hot hatch engines, a warmed-over version of a powerplant designed for more quotidian duties. The GR Yaris, by contrast, has a genuine competition engine, designed from a clean sheet to help Toyota win rallies.

Drive from the Civic Type R engine is funneled to the front wheels via a six-speed manual transmission. Honda’s clever dual-axis strut front suspension, which essentially decouples the kinematics of the front shocks from the steering knuckles, helps reduce torque steer while maintaining steering precision. With the change from the fourth-generation FK2 to the fifth-generation FK8 models, the Type R development team ditched the torsion beam rear axle in favor of a multilink setup that increased the consistency of the rear contact patch and also improved the ride.

The GR Yaris also has a six-speed manual transmission, but the drive is taken via a helical-gear transfer case to a new all-wheel-drive system, the first developed by Toyota in 20 years. The simple, lightweight driveline features a fast-response center coupling that offers three modes—Normal, which sends 60 percent of the torque to the front wheels; Sport, which sends 70 percent to the rear wheels; and Track, which splits the torque evenly between both axles.

Whereas the Civic Type R starts life as the same collection of steel stampings as a regular five-door Civic, the GR Yaris has a unique platform that combines the front elements of the new Yaris—codenamed XP210 and now on sale in Japan, Europe, and Australasia—with a rear section adapted from the Toyota GA-C platform that underpins the Corolla and C-HR crossover. Front suspension is a MacPherson strut with strengthened components, and at the rear is a specially designed multilink setup.

The Type R is built on the same production line as all the other four-door Civic hatchbacks. Type R bodies get an extra helping of structural adhesive and spot welds placed 0.8 inch apart instead of the 1.6-inch spacing used on regular Civics to improve rigidity, but otherwise, the two models are almost identical. The GR Yaris, however, is virtually hand-assembled on a special line. The only parts it shares with the regular XP210 Yaris are the front and rear lights, the door mirrors, and the roof aerial.

The regular Yaris is a four-door hatchback; the GR Yaris is a two-door that’s 2.2 inches longer, 2.4 inches wider, and 1.8 inches lower. About 10 percent of the body structure is aluminum, which helps make it 84 pounds lighter than that of the regular car, and it has 6 percent more welds and 70 percent more structural adhesive to increase rigidity. The hood, tailgate, and doors are aluminum, and the roof is made from forged carbon fiber, which saves 7.7 pounds over a comparable steel panel.

Performance: By the Numbers

In its Circuit Pack trim with the optional forged alloy wheels, the GR Yaris weighs a claimed 2,822 pounds. The last Civic Type R we tested tipped the scales at just 274 pounds more, commendable for a car that’s 22.2 inches longer, 2.9 inches wider, and doesn’t have anywhere near the same amount of exotic weight-saving materials used in its construction. The Honda thus has a weight-to-power ratio of 10.1 pounds per horsepower, about 10 percent better than the Toyota.

Our testing shows the Type R will accelerate from 0 to 60 mph in 5.0 seconds flat, dispatching the standing quarter mile in 13.7 seconds at 105.9 mph. Honda claims a top speed of 170 mph. We haven’t had the opportunity to test the GR Yaris ourselves, but Toyota claims a 0-62 mph acceleration time of 5.5 seconds, which suggests a 0-60 mph time of 5.3 to 5.4 seconds. Toyota doesn’t quote a quarter mile time but states the GR Yaris is electronically limited to 143 mph.

You’d expect the all-wheel-drive Yaris to be quicker off the line, but the Type R’s weight-to-power advantage and gearing probably give it the edge. Although the ratios in the Toyota’s transmission are more closely stacked (first gear is 3.538 and sixth 0.902, compared with 3.625 and 0.735 in the Honda) the Civic has a lower diff ratio.

Performance: On the Road

Of course, test numbers can only tell part of the story. Both these cars punch way above their weight out on real-world roads.

One drive is all you need to understand why the Civic Type R held the front-drive production car lap record at the Nürburgring Nordschleife. The Type R is the most impressive performance Honda since the original NSX.

The turbocharged 2.0-liter might deliver a stout 306 hp, but it is astonishingly smooth and tractable, pulling cleanly from just 1,500 rpm. The chassis displays superb balance and composure, feeling planted and connected at all times, with meaty yet deliciously tactile steering, a snickety-snick quick gearshift, and a ride quality that, thanks to its adaptive dampers, seems impossibly compliant for a car that rolls on such fat, low-profile performance tires.

But what makes the Honda more remarkable is that you don’t have to drive it like your hair is on fire all the time to enjoy it.

Almost six inches shorter in the wheelbase, the GR Yaris, unsurprisingly, doesn’t quite have the overall composure of the Type R on a bumpy road. But the body motions are taut and tidy, and the suspension soaks up sharp bumps with a surprising fluency that almost matches the Honda’s. The Toyota’s gearshift isn’t quite as concise, and there’s slightly less surgically precise feedback through the steering. But …

Although the Type R’s 2.0-liter engine is one for the ages, the 1.6-liter engine in the GR Yaris, with its characterful three-cylinder throb at slower speeds, is arguably more impressive. This little engine is utterly relentless from 4,000 to 7,000 rpm and revs with the easy vigor of a naturally aspirated powerplant while pumping out a solid serving of turbo torque through the midrange.

And there isn’t a hot hatch on the planet that gets into—and out of—corners as quickly and confidently as the GR Yaris, including the Civic Type R. Although its grip limits are high, the Honda ultimately follows traditional front-drive handling norms—brake then lift on corner entry to initiate rotation, then go to power and modulate the understeer.

The brakes on the GR Yaris are Porsche-level fabulous, offering superb feel and unquenchable capability. The Toyota’s shorter wheelbase makes it react to steering inputs fractionally faster than the Honda, and the all-wheel-drive system means there’s more support from the rear axle on the change of direction. You can get on the gas just as early as in the Type R, then let the differentials do their thing and steer where you want to go. The nose of the GR Yaris stays more snugly tucked into the apex, the rear axle tracking faithfully behind, the all-wheel-drive system ready to help punch the car down the road the moment you go to full throttle.

Which Is the Hottest?

There’s no wrong answer here. Each of these cars is a brilliant take on the hot hatch formula.

The Honda Civic Type R, all wings and vents, edges and angles, is unapologetically—joyously—Japanese in design and execution. It is the hot hatch, Gundam style. Three years after its launch, it remains a benchmark model, with one of the finest front-drive chassis ever. The Type R finished fourth in our 2018 Best Driver’s Car shootout, besting exotics such as the McLaren 720S and heavy-hitting sports sedans such as the BMW M5, for good reason.

But the GR Yaris is the hotter of these two hatches.

It’s not just the way the GR Yaris drives, especially on tight, twisting, slippery roads. No, what makes it more desirable is that it’s not merely an expertly warmed-over family car. The Toyota GR Yaris is a genuine homologation special, with a special engine, a special drivetrain, and a special body, all designed to make the Yaris more competitive in the World Rally Championship. It’s been engineered from the wheels up to deliver the racer’s edge.

The racer’s edge. You can see it. More important, you can feel it.