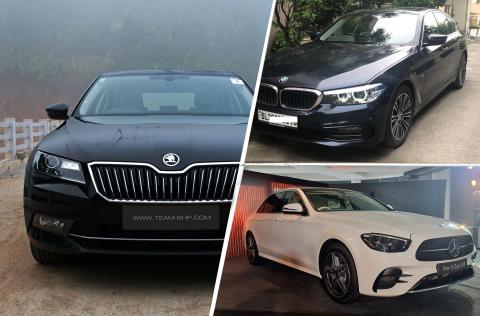 The car is driven by my uncle who is 60. Just like me, he is a big fan of sedans so has no intention of buying an SUV as he has been recommended by many.

The time has come to finally upgrade our 2016 Skoda Superb L&K TDI DSG. The car has done approximately 80k kms and will run out of its add on warranty this month as well. We have been pretty happy with the car so far in terms of its performance and most of all the oodles of passenger as well as luggage space it offers. I believe, it has the largest boot space in its class.

I however cannot say that the car has been as reliable as it should have been in the past 06+ years as it has had its share of failures – AC compressor, fuel pump, window winders, water pump and other minor niggles which were all fortunately covered under warranty.

The car is driven by my uncle who is 60. Just like me, he is a big fan of sedans so has no intention of buying an SUV as he has been recommended by many.

I have told him to specifically to choose between the following in the said order:

I advised him to look at a petrol engine due to the limited running, higher maintenance costs of a diesel car and diesel prices being almost the same as petrol and also I had advised to move to a higher engine spec over the current 2 litre for a better driving experience. The car is driven out of town once a month.

We will begin the hunt for a new car next week so would like your suggestions on what we should consider from the above options.

Here’s what BHPian IshaanIan had to say on the matter:

I don’t have much experience with cars from this segment especially the new ones but for what it may be worth, I can tell you what I have observed in my circle of friends; more people I know who buy a 5 series, swear by the product and the brand buying the next generation of the car as soon as it comes out, compared to the E or the A6. That said, might a Volvo S90 be a more ideal upgrade from a Skoda Superb considering the price to space value, than the German trio?

Here’s what BHPian AJ56 had to say on the matter:

I’m assuming you’re only considering new cars. There are no non 2L petrol engines in the choices you’ve listed, the closest would be the E53 AMG. Also, there is no E250 you have to chose between the E200 petrol and E220d/350d. Same deal with A6, only 45 TFSi with the turbo 2L engine currently on sale.

A6 is not as quick as the 5 and neither does it handle corners as well as the 5 and it’s FWD so that should be the first elimination. S90 is a dated design and if cabin ambience is important nothing can touch the E class among these. Don’t forget Lexus ES, best exterior design I find next to the G30 5 series, unfortunately it’s limited to 180 km/hr so don’t buy if that’s important to you (so is the S90 for that matter).

There’s also the Jag XF but again that’s quite an old design now and nearing its end of lifecycle. To me it’s between the 530i M sport and E200 (as you rightly don’t want any diesel). E has a better ride (plusher) but is also slower by over a whole second 0-100 and due to its LWB is lumpy around corners, 530i is faster and handles better but doesn’t have the interior ambience the E has. Test drive both and decide.

Here’s what BHPian iliketurtles had to say on the matter:

Going through your post, I sense your weariness with your Škoda’s reliability (or the lack of it), and sense you want a modicum of reliability from the next ride.

With that in mind, I think the 530i should be a top pick for you. Fantastic build quality inside out, adaptive suspension works a charm, won’t leave you wanting for features, and the 5 year BSI/warranty plans makes owning one of these an absolute breeze. A calm cruiser that can quickly get its freak on when you want to put the hammer down.

The only fly in the ointment IMO is the space at the back, which, while acceptable, might not be up to the mark for your use case (4-5 people on board when touring). Only you can tell if it has enough space for your needs. If the 530i doesn’t, give the 330 LI a dekko.

And since you’re still evaluating cars, do check out the Lexus ES300 too. It doesn’t have the driving verve of the 5, but as a city car plus highway cruiser, it is excellent. And Lexus’ reliability and service standards are legendary for good reason.

Those would be my top few picks from your list. By all means check out the Audi, but I’m not sure your uncle would want to remain under the VAG umbrella, and I’d personally pick the 5 over the E, all things considered.