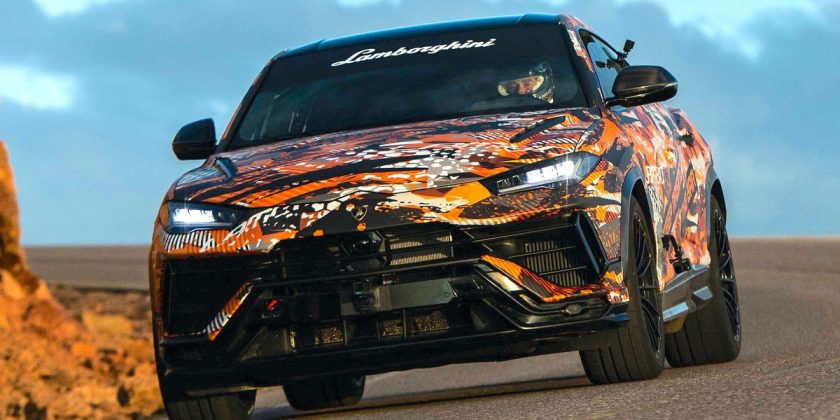 The Urus has been a record-breaking success for Lamborghini, and later this month the hyper-SUV will be getting a mid-life refresh. The Italian supercar firm has decided to lift the lid on the updated Urus in style by setting a new record in the production SUV category on the legendary Pikes Peak hill climb.

The camouflaged Urus was piloted by Pirelli test driver Simone Faggioli, who set a time of 10:32.064 up the 156-corner, 12.42-mile Colorado mountain route. The Urus beat the previous production SUV record set in 2018 by a Bentley Bentayga by almost 18 seconds, demonstrating just how far ahead the Lamborghini SUV is of its rivals in terms of performance.

Lamborghini made a few modifications to the Urus to ensure it complied with the safety regulations of the Race To The Clouds, such as a roll cage, racing seats with a six-point harness and a fire extinguisher. Otherwise, it was the same as the upcoming production model. Power figures for the updated Urus are yet to be confirmed but expect the twin-turbo V8 engine to produce even more power than the current 641bhp model.

Lamborghini’s Chief Technical Officer Rouven Mohr said, “Pikes Peak is the most famous hill climb event in the world, as well as being extremely challenging for the car: the uneven track layout tests the chassis’ balance; the significant altitude differences stress the powertrain, and the weather conditions can change very rapidly between start to finish.”

Whether you love it or hate it, there’s no denying that the Lamborghini Urus offers some seriously strong performance for an SUV, and we’ll be bringing you news of the facelifted model soon. However, the question still remains: will Ferrari’s V12-powered ‘Purosangue’ hyper-SUV be faster than the Urus?