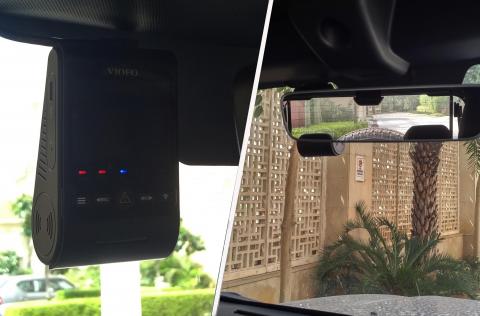 The considerations I had for a dashcam were – Reliable, capacitor based, atleast 2k and dual dashcam. Wanted something which was just fit & forget.

BHPian batish recently shared this with other enthusiasts.

I was having second thoughts about getting a dashcam because of vertical and small windshield in the Thar. But posts like this and this along with one personal incident, just made me get one.

I have been using Viofo since Aliexpress days ~ 2017. After using A119 and A119S since the past 5 years, with no problems whatsoever, naturally my first choice was Viofo. The considerations I had for a dashcam were – Reliable, capacitor based, atleast 2k and dual dashcam. Wanted something which was just fit & forget. Not something I’d have to maintain with TLC. I did not want anything which would just give up because of heat, cold or just freeze the videos in between without even a notification. So, in all these considerations’ reliability part was paramount to me.

Usually, I am a brand loyal person. I don’t jump ships very often. But this time I started looking for alternatives because of Viofo’s pricing in India. Dashcam’s from companies like 70Mai and DDPAI cost almost half of what Viofo retails in India. If anybody from Viofo is reading this, please reduce your prices, like me not everybody is brand loyal. Initially, after looking at prices on Viofo’s India website, I started looking for alternatives.

DDPAI Z40: I was about to buy this, had added this to my cart then thought comparing price to Amazon, if they were running any card promotional scheme or if there was a lightening deal available. Thank God, I didn’t purchase it then and there, because this is what I found on their Amazon page: DDPAI MOLA E3: This had all the features I wanted, dual dashcam, auto glare and 2K recording. But this would just fit on the existing IRVM which for me is an eyesore. 4 Brackets would stare at me every time I’d look into the mirror. On top of that, it had inbuilt lithium batteries, and I am really fussy about keeping batteries in direct sunlight and that too In temperatures which can even melt the roads.

This is how it’d look in the Thar: At that point I realised wedge shaped, discreet dashcams are hard to find in other brands. So I was back to Viofo. Luckily, Viofo launched A229 Duo which I found when I was just lurking around on their site.

I purchased A229 Duo from Viofo.in on July 8 and within 48 hours it was with me. Fortunately, No hiccups here. This is what happens when Aliexpress spoils you, I miss the days when mentioning an additional pad in the order comments, they’d provide it complimentary. No more now. Sigh.

This is what was included in the box apart from the main front facing camera: In excitement, forgot to capture image of box contents which I realized after installation, so this Image from Youtuber RetroCarGuy530.

You can simply just plug the included charger to car’s port, but it becomes a hassle if your car has single port like mine. So, I found another way to do this. Since I did not buy the hardwiring kit. I used an extension cable from Maruti Suzuki (Part No: 990J0M999L1-550), was available online. Placed an order, picked it up after 2-3 days. I removed the male cigarette lighter socket from extension cable, crimped a thimble for negative line and a fuse tap for positive line. Routed it back to the glove box with some cable ties and voila, everything’s concealed.

Rather than me repeating the same thing, You can familiarize yourself with this post. It is pretty exhaustive, the only thing changed is the extension cable source as Aliexpress has been banned. So you may try the above part number.

This is the best method you can use to install a dashcam. No wire cutting, no warranty issues, no alterations to your dashcam or your car. Plus, you get an addition USB socket for charging, as the dashcam only takes one port in the supplied charger. This is how it looks from driver’s view. Also notice the beautifully hand installed Honda’s gorgeous IRVM: This is how it looks when it is switched off: