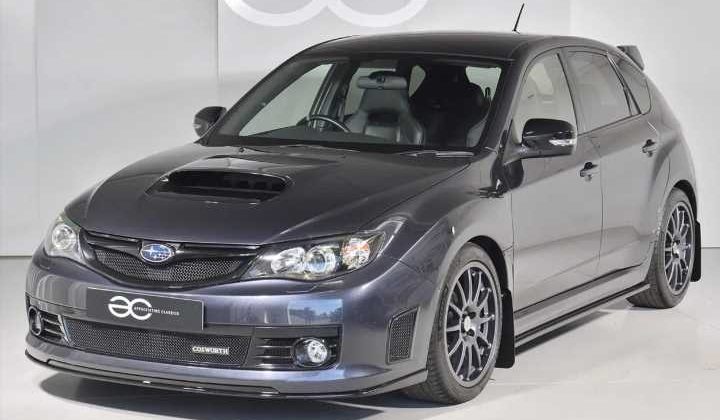 Cosworth and Subaru weren't necessarily a match made in heaven. But that didn't limit the ambition

Subarus and British tuning companies go together like influencers and wrapped supercars. The name that’ll likely spring to mind is Prodrive, the engineering powerhouse behind the Subaru rally team and a series of red-hot specials like the P1. Hell, even Litchfield made a name for itself by importing JDM-spec cars and giving them a thorough overhaul in the shape of the Type 25. But we often forget that a company once famed for giving us the most hardcore Fords in Europe also had a go at boosting the boxer.

We’re talking, of course, about Cosworth. Obviously, Cosworth’s history spans far beyond its ties with Ford, particularly as an engine builder for, well, pretty much every motorsport discipline, but on the road car side of things its most iconic and most recent creations were those based on offerings from the blue ovals. That was certainly the case in 2010, making it all the more surprising when it was Cosworth, not Prodrive, that launched a hardcore limited-edition version of the STI hatch.

Let’s not forget the UK-spec Impreza WRX STI hatch wasn’t nearly as well received as the generations that came before it. Partly because the Impreza’s rally wins came in the form of the coupe and saloon cars, but also because the initial STI offering just wasn’t as good as people were expecting. Good news for Cosworth, then.

The company left no stone unturned when developing the CS400. The chassis underwent a number of changes, including new Bilstein dampers and Eibach springs, lowering the ride height by 15mm. The bushings were also upgraded, while the new Cosworth-branded AP Racing brakes featured six-piston calipers up front for face-squashing stopping power. In front of them sit 18-inch rims which, unfortunately, aren’t painted in gold – but they’re lighter than the wheels on the standard STI.

Naturally, this being Cosworth, all the major changes can be found under the bonnet. Subaru’s 2.5-litre boxer was carried over to the CS400, only it was stripped down and reworked from the ground up. A bigger turbo was fitted, along with new con-rods, gaskets, bearings and pistons. Throw in a new intake and freer flowing exhaust, and power jumped from the stock 300hp to – if the name didn’t give it away – a ludicrous 400hp. Sure there are plenty of hot hatches that can reach that level of power today, but back in 2010 that was mighty impressive for a family hatch.

As was the price. The CS400 cost a little under £50,000 new, which, at the time, wasn’t far off the cost of an R35 Nissan GT-R. It also didn’t help that the car was polarising to say the least. Some journalists hailed it as the best Impreza in a decade, while others criticised its power delivery and the positioning that left it too close to the R35. Either way, the CS400 is the kind of car you need to need to drive to see what all the fuss is about.

The opportunities to do so don’t crop up all that often given Cosworth only produced 75 examples. This CS400 is number 30 and appears to be one of the cleanest Impreza WRX STIs out there. Only 12,000 miles have been covered since it was registered in 2010 and it’s accompanied by a full service and MOT history. It’s even had some recent work done on the brakes, which can’t have been cheap, along with a cambelt change last year. True, £55,000 is a lot of money for a Impreza hatch, especially as you can get an RA-R for similar money. But it won’t be as good a daily driver as the CS400. Nor is it as rare…