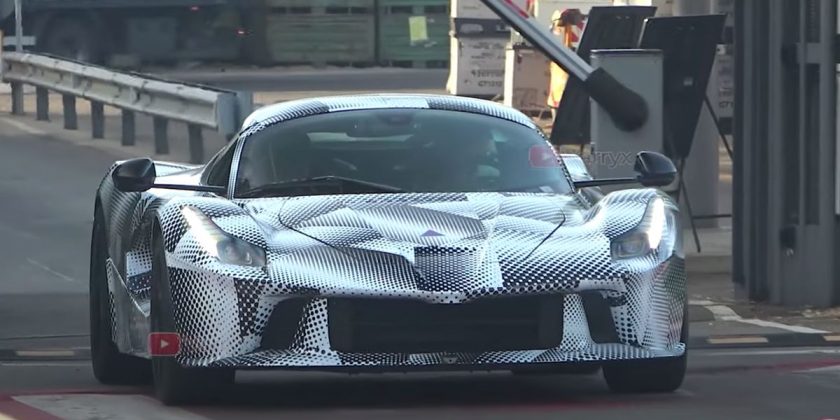 Well, well well, what do we have here, then? In the above video, we see an unusual prototype slowing driving around Ferrari’s Fiorano test track and milling around the vicinity. While it looks like it’s based on a LaFerrari Aperta, the bodywork is quite different. Colour us intrigued.

Not a huge amount looks to have changed at the front end or down the sides, but the roofline isn’t the same, and the back end plus the rear deck deviate from the drop-top LaF substantially.

Given the use of a LaFerrari to create this mule, the natural thing to wonder is if this is Maranello’s next limited-run hypercar. It’s now seven years since the LaFerrari went into production, so it seems about the right time for its successor to be undergoing early development.

Since the mystery car is only pootling around Fiorano, it’s tricky to tell what might be powering it. If this really is the next hypercar, it’d need to be enormously powerful to assert dominance over the SF90. While the SF90 has a hypercar-sounding output of 986bhp, it’s a non-limited, series-production car. Plus, at £376,048, it’s significantly cheaper than the LaFerrari was.

With that in mind, a V12 with a much more potent hybrid system than the LaFerrari’s could be an option. In that case, it was more of a mild setup, capable of supplementing the 6.3-litre engine’s power only in short bursts and (officially) unable to drive the car on its own. The SF90, on the other hand, has a 7.9kWh battery pack and a trio of electric motors.

Then again, Ferrari has previously cast doubt on the idea of another hybrid V12. We could instead be looking at a development of the SF90’s powertrain with more power extracted from the electric side of the equation.

We’re speculating on both fronts, of course. What do you make of this test mule?