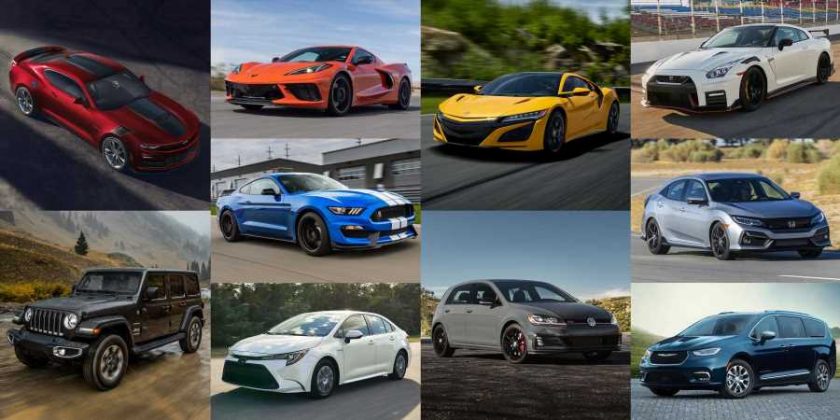 Nameplates die. The sad truth about being a car enthusiast is that eventually your favorite car might be on the corporate chopping block. Now, not all cars get the loving embrace that helps push them along, but some automakers make the tough decision to end long-running or enthusiast-friendly cars. Some cars get a second chance at making owners happy, like Dodge’s Challenger or Chevrolet’s Camaro, but that is not generally the case. So, we put together a list of 20 cars we hope never get the Vega treatment, rather make families happy for years to come.

Volkswagen’s Golf GTI has been around since 1976, with the base Golf only a couple of years older. This hopped-up Golf has become a staple in car enthusiasts’ garages over its past seven generations. However, with shrinking small car sales, the GTI’s days could be numbered. Volkswagen probably won’t bring the eighth-generation base Golf stateside, which should be concerning for GTI fans. We hope the continued enthusiasm surrounding VW’s hot hatch keeps it alive for future generations to enjoy.

Ford’s latest, S550-generation Mustang might be the best pony to ever leave the factory. While it’s unlikely Ford would ever shuffle the Mustang off its product portfolio, it has tried before. Remember the Ford Probe? The all-electric Ford Mustang Mach-E hints that Ford sees lots of value in the Mustang name, so it’s highly unlikely the company would end the beloved two-door coupe and convertible.

There hasn’t been too much rumbling from the rumor mills about the seventh-generation Chevrolet Camaro, perhaps not the best news for the next-generation car. Of course, we’ve already seen a world without a Camaro after the model ceased production in 2002. Obviously, it was revived in 2010. Let’s hope the Camaro never has to be revived again.

The Dodge Challenger was late to the original pony car competition when it joined the fight in 1969, but got the jump on Chevrolet with its revived nameplate in 2009. The Challenger is in a similar place as the Camaro: a fun car not setting sales numbers ablaze. Still, even though it might not be the biggest money maker, we’d be sad to see it go.

The odds of Porsche turning away from the 911 is slim. It would be a safe bet that as long as there’s a Porsche badge on a vehicle that moves people there’s a 911 in the lineup.

Audi’s TT coupe might not be loved by all, but it should be. A former platform mate of the Volkswagen Beetle, the Audi TT isn’t a world-beating sports car. I don’t think anyone would ever suggest it was supposed to be, either. Instead, the TT is a fun, sporty coupe reasonable enough to drive around every day. This little Audi Coupe has only been around since ’98, but we would hate to see it go.

Make no mistake, the Miata is always the answer. Mazda’s beloved roadster fills a niche for enthusiasts desiring a fun, reliable and sporty two-seater. Since its release in ’89, the MX-5 has made fans of affordable sports cars extremely happy. It’s hard to imagine a world without the Mazda MX-5.

With Corvette engineers finally moving the engine behind the driver you probably won’t see the car on the corporate chopping block anytime soon. However, the American icon has had a leap year, and likely serious discussions about its future. Thankfully, that is all in the past.

Yes, the Jeep Wrangler isn’t a car, per se. However, the CJ replacement has become an icon unto itself. With more sales than anyone could have imagined when the original military Jeeps made their ways to servicemen, we doubt Jeep’s hot selling off-roader sees the end of production anytime soon.

The Subaru Impreza has changed a lot since its inception in 1992. More importantly, it’s become part of modern car culture through its rally-bred WRX and WRX STI variants. However, its arch-nemesis, the Mitsubishi Lancer, has ceased production. We doubt Subaru is going to axe the Impreza anytime soon, but with a growing push for more crossovers, any sedan is up for grabs.

The Mercedes-Benz S-Class is a status symbol. It means you’ve arrived. Though Mercedes-AMG has cut the V12-powered AMG 65 from the lineup, we can’t see Merc dropping this luxury land yacht anytime soon. It will likely transform with time, but probably never go away.

In a similar position to the Mercedes, BMW’s 5-Series is a legend. With the M5 becoming a performance icon, the BMW 5-Series has cemented itself into car culture. Again, the growing push for crossovers might one day have BMW revise its sedan strategy, but that probably won’t happen anytime soon.

The Honda Civic might not be as fun-to-drive as a Mazda Miata or as luxe as an S-Class, but the Civic is supremely important to our car culture. Not only did this lowly subcompact establish Honda in the American market but it was a staple in the Fast and Furious era of modified cars. The Civic has matured with time, but hopefully doesn’t get sent by the wayside in lieu of something bland.

The Corolla has ben a Toyota staple since the ’60s. With a legacy spanning the Initial-D drifting AE86 to the modern Corolla Hybrid, this compact ‘Yota is more important to car culture than you might imagine.

Sure, Nissan shed some of its vaunted GT-R’s legacy when the name Skyline was spun off to the Japanese equivalent of the Infiniti Q50. But the spirit lives on with the R35 GT-R. The shortened name doesn’t mean this is any less than the beloved Nissan Skyline GT-R, instead it just gives enthusiasts the most aggressive and interesting model. With the GT-R getting a little old and no real rumblings of a next-generation, this high-horsepower Japanese sports coupe might not be long for the world.

The Mini Cooper’s history is long and confusing, with the compact hatchback spanning more than 60 years. The car might not be as small as it once was, but it still is important to the car landscape. This great handling hatchback might be hard to argue for in a boardroom, but it is easy to love on the road.

Like other sedans on this list, the Genesis G90 might one day have to be shuffled off the Genesis lineup in the future. However, with the push to establish the Genesis brand and the continued push behind its products, we doubt the G90 is going anywhere soon.

No, not the crossover. The minivan. Chrysler replaced its long-running, flagship Town and Country minivan with the revived Pacifica. While confusing at the time, the shift seems to reflect a major change in Chrysler’s minivan direction. The most important thing is Chrysler continues to make a minivan. Let’s hope that never changes.

The everyday supercar has entered a new generation, and we can only hope it sees a third. The Acura NSX might not be as simple and accessible as it was in the past, but what is?

Japanese Luxury. The Lexus LS faces the same problem as other luxury sedans: a shrinking market. Hopefully this beloved Lexus can shift and change without losing its identity or getting axed all together with the push for crossover domination.