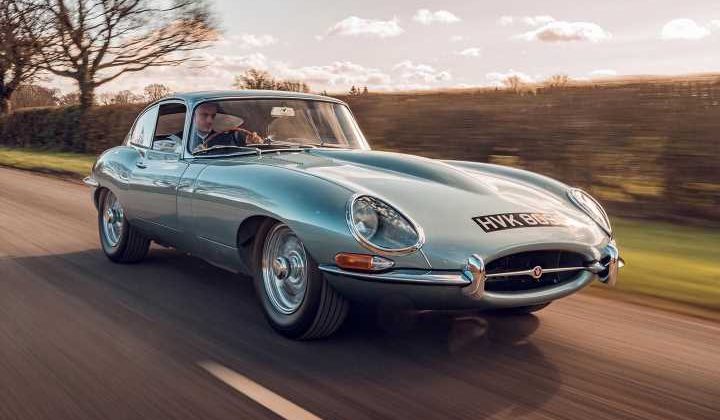 A 60-year-old, good-as-new E-Type is just about as joyous as things gets

As a Brit, is it possible to not like the Jaguar E-Type? It's surely up there with sugary tea, toad-in-the-hole and David Beckham as one of our national institutions, revered near enough universally and acknowledged around the globe as idiosyncratically British. Personally, however, a roadgoing E-Type has never tickled my pickle like it does for so many. That a Lightweight or one of the Eagle cars does blow my hair back shows how close it is, but as standard I've always found them a bit narrow, a bit too dainty and rather too chromey.

There's always that concern with old cars, too, that they'll offer up rather more in terms of stress than they will reward and enjoyment – the cool, caddish dream made into a hot, sticky nightmare. It should be said, however, that this view is from never having driven an E-Type; so what better car to start with, then, than Jaguar's very own Reborn one?

First announced back in 2017, the E-Type Reborn programme followed similar initiatives for early Land Rovers and Range Rovers. Put simply, it was to make the cars as good as new once more, using the skills and expertise of JLR Classic. The Reborns weren't to be restomods – there are plenty out there offering those services – but rather a realisation of what a new, completely stock E-Type could be. The 1960s put back together in the 21st century, in other words; the 10 cars sourced retaining as many original parts as possible, with Jaguar Classic technicians restoring and repairing rather than replacing.

If body panels did need renewing, they were sourced from Classic's reverse engineered panel programme and treated to the same spot welding as would have been used to fit them back in the day. With build records and original drawings held by Jag's Heritage Trust, the Reborn E-Types are as close to original specification as anyone can realistically claim to produce. And it isn't hard to see the appeal of what should effectively be a box-fresh E-Type, built by Jaguar themselves.

Of course, it looks utterly spectacular. Though still not quite enough to have your correspondent weak at the knees, there's no arguing with the execution: it really does look freshly assembled, gleaming and glistening like a brand new car. The E-Type looks smaller than ever, too, especially alongside 2021 Jaguars, almost like a drivable toy or one of those enormous scale models for collectors – it is tiny.

That point is forced home beyond any doubt inside. What was probably an ideal fit for those of a Norman Dewis stature is certainly what might be termed snug for those much larger. As in shoes can't be worn. And what you think is the armrest is the passenger seat. But, still, what an environment to be hemmed into: the Smiths dials are wonderful, the wooden steering wheel predictably evocative and the one nod to modernity – the DAB and nav-equipped media system – is seamlessly integrated into the dash.

The E-Type starts quite literally on the button, ignition primed with the key and big straight-six firing without hesitation or delay. Don't go thinking it's too easy, however; the clutch is stiff, reverse on the four-speed gearbox whole yards from any other gear and visibility tricky given you're hunched over the wheel. This was a time, of course, when men were men and sports cars were sports cars – a little hard work was all part of the experience. Moreover, delicate and ornate though that steering wheel looks, the lack of power assistance makes it a proper heave at manoeuvring speed.

Truthfully, by this point any notion of cool is out of the wind-down window: you're driving without shoes on, huffing and puffing over a three-point turn and squashed in like a parent who's stolen a go-kart. But who cares? This is an E-Type, an E-Type Reborn no less, perhaps the most famous sports car Britain has ever produced – it's going to be enjoyed, come what may.

The E-Type beguiles even at walking speed, with the view out over that louvred bonnet and a mellow burble emanating from the engine. That was to be expected; what's rather more surprising is just how together the old Jag feels, immediately and impressively. It doesn't squeak or rattle, and the pedals are precise and feelsome when encountering junctions for the first time. Or maybe all cars feel like this in socks. Point is the Reborn works for someone with modern driving sensibilities – it doesn't need kid gloves or the footwork of a ballerina to operate and enjoy.

That impression is maintained – is increased, if anything – with speed. There's the feel and the immersion and the joy of driving of a classic car, but (as it was meant to) with fewer of the usual drawbacks. It brakes straight and true, all four gears engage without drama, it steers slowly but not lazily; the E-Type feels classic yet in a properly endearing way, a pleasant reminder of how things used to be rather than a ghastly throwback to cars of toil and trouble.

As it has been for more than half a century, the engine is at the centre of the E-Type appeal. This Reborn is a 4.2-litre model, boasting in the region of 270hp and 285lb ft; with a kerbweight of less than 1,200kg – that's more than enough performance for the car to feel really potent, but it's the delivery of that speed that's memorable. It will bimble along at very low revs without fuss, but every extra centimetre of accelerator travel (remember when the throttle had feel? And weight?) brings with it a commensurate increase in performance, the speed building abundantly and generously as revs climb. Certainly it still feels brisk in 2020; in the 1960s it must have been like a rocket.

And the sound is divine. It's everything we love about straight-sixes – the smoothness and melodic nature – combined with all that's good about classics, bringing a raw edge to the noise, some authentic volume and overrun gurgles that are impossible not to smile about. This is surely why people make allowances for E-Types that maybe aren't so fit – that engine, its hearty delivery and sweet sonics, would cover all manner of flaws.

Herein, however, is the joy of the Reborn E-Type. Because there's everything you'd expect to find in Jaguar's most famous car, alongside a level of finesse and cohesion that you probably wouldn't. It corners and cruises and stops and goes not like a modern car, but like you've time travelled back to 1963. And that turns out to be as good as – if not better than – anyone dared dream. The Reborn doesn't come cheap, with the 10 cars costing in the region of £300k depending on options, but then who better to revitalise an E-Type than Jaguar Classic?

As a beautifully judged amalgamation of classic style and contemporary attention to detail, it's a captivating thing. With the E-Type turning 60 next year, don't be surprised to see a lot more affection directed Jaguar's way. After a fleeting drive in this one, you can count on one more person joining the love-in.