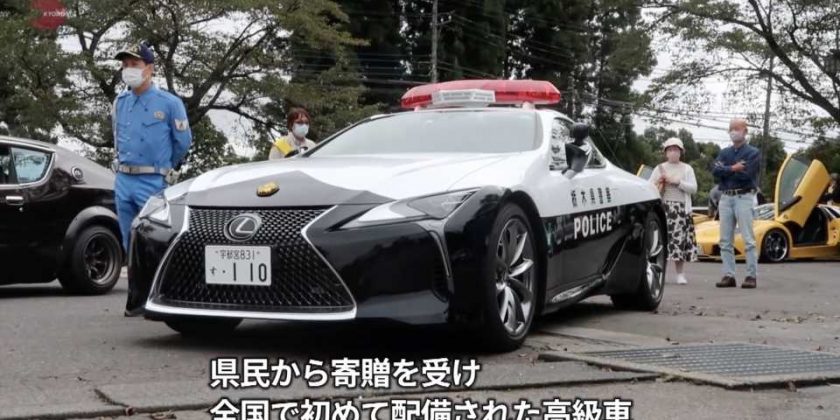 Between 4×4 school buses and highway patrol semi trucks, we’ve been on a weird municipal vehicle kick lately. It’s not about to end, either, as today we learned that police in the Japanese prefecture of Tochigi—the operators of a Nissan GT-R police cruiser—have recently adopted a new, high-performance companion to their supercar: A Lexus LC 500.

Tochigi’s police force received the luxurious Lexus as a donation from a local pharmaceutical executive, Kazuo Nakamura, who previously gifted the department its GT-R, reports The Mainichi. Nakamura reportedly reached out to the police about donating a second supercar back in July 2019, and requested the department “make use of this [car] in preventing traffic accidents.” According to 47 News, authorities unveiled their new toy at a ceremony on the morning of Sept. 27, where the LC 500 led a parade of supercars as part of a campaign to promote safe high-beam use to local drivers.

Said to be the first Lexus to enter service with police in Japan, the LC 500 will serve with Tochigi’s Mobile Traffic Unit and be used to conduct traffic stops and perform various promotional duties. While it always sucks to get pulled over, seeing that it’s an LC 500 hailing you down would take some of the misery out of the experience. It might also offer an opportunity to strike up a conversation with the officer, and it’d be nice to hear them wind out its naturally aspirated, 5.0-liter V8 when they’re finished writing your ticket.