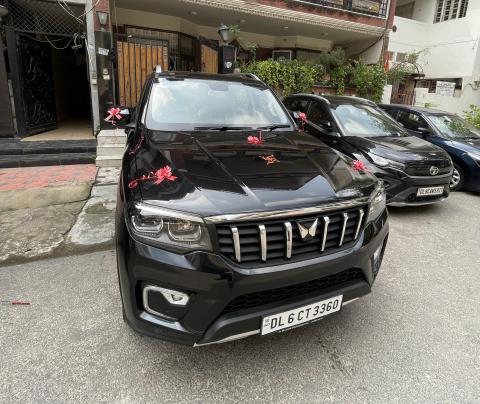 The alignment issue is something I know isn’t impossible to solve, since I come from an XUV 500.

BHPian kushgandhi recently shared this with other enthusiasts.

Well this morning was like a dream coming true. My 4Xplor Scorpio-N delivered on day 1. But now it’s time to start the niggle thread of the vehicle. A few points I noted on driving the vehicle for 100 km on day 1 one of which is pretty serious and needs immediate rectification.

The below picture may not give you a clear idea but the high beam is focused just in the bottom of the marked area. It isn’t spread wide enough and not focused on the road.

It can’t be used for dipper or for high beam usage on empty roads. Here’s what BHPian Poitive had to say on the matter:

Many congratulations on getting what might be the first Scorpio N on the forum  Wishing you many happy miles with it.

From what I recollect of my drive, I could feel the finer undulations of the road via the chassis+suspension (seat, feet/floor) and not really on the steering.

Though unlikely and only a dream: What if Mahindra has an electro-hydraulic steering in this one?!!

This could give it the character of being communicative as described, yet be soft due to the electronic part. This is like getting the best of both worlds. (In such steerings there is a hydraulic pump, which whose pressure is additonally modified via electronic means).

From what I drove and expect, it almost certainly would not be an electro-hydraulic system, but that too could be deceptive based on the specific steering design and mapping of the electronic part with it’s influence being up to a higher speed (something which just might be different between TD vehicles and production cars).

To get over this fantasy, one needs to check if there is a place to pour Hydraulic Steering Oil.

Here’s what BHPian anantpoddar had to say on the matter:

Congratulations on getting your vehicle on the first day!

I have a feeling your points 1 & 2 might be related. I have observed similar behaviour on the feather-light EPAS of my XUV300.

Once wheel alignment is off, I can feel every bump, every undulation or spike on the road surface, to the extent that the steering feels jiggly.

Getting the wheel alignment right fixes these in an instant.

The same is true if the tyre pressure difference in the front 2 wheels increases significantly, ~5psi

You can check if both your front tyres are at the correct pressure and go for a wheel alignment.

Check the hotspot of both the beams against a wall. The high beam hotspot should be right above that of the low beam.

It is difficult to assess the hotspot of Reflector-LED high beams on city roads as there is excessive scattering of light in such setups and you would only be able to see the light being reflected off the foreground.This is one of the major grouse with Reflector-LED setups and very few vehicles get it right.

My recommendation would be to shoot an email to Mahindra right away. Any issues observed in the first week must definitely be documented, more so if it is right after delivery.

Given you’re one of the old timer Mahindra owners, you know these issues aren’t something that Mahindra can’t fix.