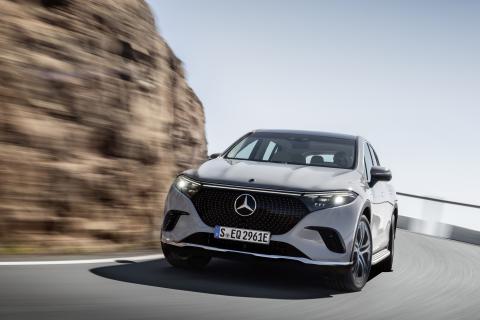 The Mercedes-Benz EQS SUV will take on the likes of the BMW iX and Tesla Model X.

Mercedes-Benz has unveiled its new EQS SUV. The electric 7-seater SUV is now the brand’s flagship electric offering in the segment and will take on the likes of the BMW iX and Tesla Model X.

The new Mercedes-Benz EQS SUV will be offered in two variants, similar to the EQS sedan (unveiled last year). These include the EQS 450+ and the EQS 580 4MATIC. The base variant comes with a single electric motor powering the rear axle and produces 355 BHP and 568 Nm. The top-spec, on the other hand, features dual electric motors (one on each axle), producing a combined output of 536 BHP and 858 Nm.

Both trim levels of the EQS SUV are said to be capable of charging from 10 – 80 per cent in just 31 minutes, using a DC fast charger. Mercedes-Benz also states that the EQS can cover a maximum range of around 600 km (WLTP cycle), which is about 170 km less than its sedan sibling.

The EQS SUV carries forward the familiar design philosophy of its other electric-powered siblings. The SUV features a black panel at the front, flanked by sleek LED headlights, large aerodynamic alloy wheels, and a full width LED light bar for the taillights at the rear. The SUV also features a panoramic sunroof, flush-fitting door handles, a side-step and a roof-integrated spoiler at the rear; among others.

Inside, the EQS SUV features the brand’s MBUX hyperscreen integrating three displays (the instrument cluster, the infotainment unit and a separate screen for the front passenger). The car also comes with ventilated & heated seats, a rear-seat entertainment system with removable 116-inch touchscreen control and a fingerprint scanner to customise the setting for each seat.

The Mercedes-Benz EQS SUV is expected to go on sale internationally sometime later this year. Prices for the flagship electric SUV will be announced closer to the time of launch.