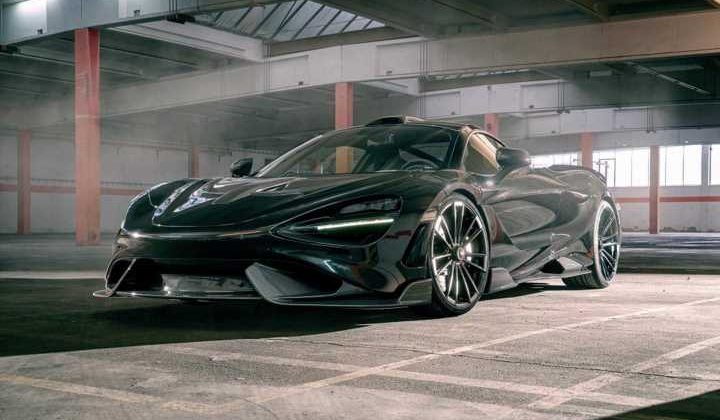 The latest Longtail was already scarily quick; now it has almost 100hp more to work with…

"It seems to be from fourth gear onwards that the electronic systems give you everything the highly-strung V8 has to offer. Flick up from third and the car slingshots itself along the following straight as though four rockets have been pressed into its quad exhaust tips and ignited."

That's how Dan described the McLaren 765LT last September, on a circuit as vast as Silverstone no less. Even by the standards of McLaren Automotive, a company which has never made a car with less than 500hp, the new Longtail is obscenely rapid; it would surely be madness to crave any more. Yet here we are, with Novitec boasting about a range of upgrades for one of the world's very fastest cars.

855hp is the headline number, which is enormous whichever way you cut it. It's 90hp more than a standard LT, 220hp more than the BMW M5 CS (the most powerful M car ever, lest we forget), 405hp more than a 911 Carrera S and just about twice the power of an A45 AMG S. It's lunacy, surely, and means acceleration that make your head hurt just reading the numbers: 62mph passes in 2.5 seconds and 124mph just four seconds later; the normal 765 is said to reach 186mph in 18 seconds, so it's entirely reasonable to expect the Novitec car to improve on that as well.

The additional power and torque – what was 590lb ft is now 662 – is achieved through familiar methods. Novitec's 'N-Tronic' control module introduces new maps for ignition and injection as well as modifying the boost pressure control. In conjunction with a new exhaust, the twin-turbo 4.0-litre V8 is now more potent than in any previous installation.

Of course, this being Novitec, power is just the start. Specially developed sport springs lower the ride height by 20mm, said to make the handling "even more agile"; Vossen has again been called upon to manufacture wheels; and there are one or two bits of carbon to choose from, too. The tuner's latest range of components comprises headlight inserts, front bootlid and roof scoop, which might be considered modest given some previous efforts. The 765 wasn't exactly shy and retiring to begin with, though it might be argued here that the ride height drop does as much for drama as any carbon add-ons. Well, unless you have the gold exhaust pipes.

Novitec has a demonstrator car ready now – it'll come as no surprise to learn that it's already been videoed on the autobahn, too, romping through 300km/h like most cars would accelerate at less than half that speed. It really is remarkable to watch. If a car already capable of almost 180mph on the approach to Stowe isn't quite fast enough, you know who to call…