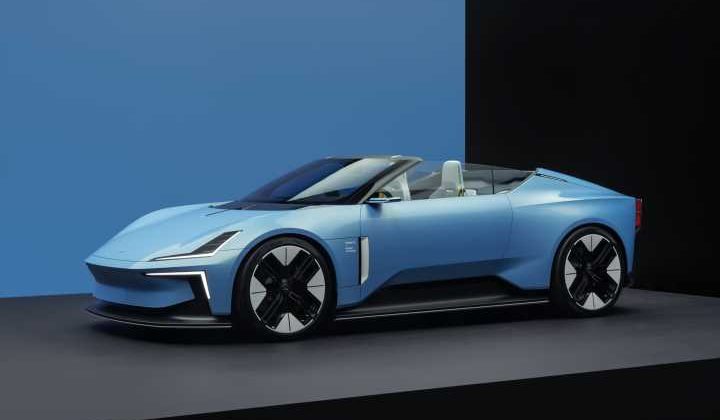 The Polestar O2 concept went down a storm, so they're building it – but not until 2026…

When we were with Polestar at Goodwood earlier in the summer, standing around its O2 roadster concept, Thomas Ingenlath, the firm’s CEO, told us the company doesn’t do pointless concepts that have no basis in future production. So we told you to expect a production version to appear and, guess what? It will. Just don’t bank on it coming with a drone, like the concept, that will follow you taking pictures from on high as you drive, ready to upload straight to social media.

Hopefully, that’s not too much of a disappointment. Or the fact that you’ll have to wait until 2026, which seems like an awfully long time to hang about for a design that’s already out there. And which you can reserve online, from today.

It’s going to be called the Polestar 6 and, of course, being a Polestar, it’ll be an electric high-performance roadster. A hard-top convertible that’ll be built on Polestar’s in-house and bespoke platform made from bonded aluminium. It’s the same platform that’s been confirmed for the 2024 Polestar 5, so the roadster will also feature 800-volt electric architecture and it’ll have some oomph. The outputs match those advertised for the 5, at 884hp and 664lb ft from the dual-motor powertrain. That equates to a projected 0-62mph time of 3.2 seconds and a top speed of 155mph.

To begin with, there will be 500 numbered editions of the Polestar 6. These will be called the LA Concept edition, and feature that unique ‘Sky’ blue paint and the 21-inch alloys and light leather upholstery that appeared on the original O2 concept.

Ingenlath says that “with the overwhelming consumer and press response, we took the decision to put this stunning roadster into production and I am so excited to make it a reality. Polestar 6 is a perfect combination of powerful electric performance and the thrill of fresh air with the top down.”

If you missed the O2 Concept at Goodwood and you happen to be in California, then it’ll be back on display there at the Pebble Beach Concours d’Elegance for Monterey Car Week. And it’s worth seeing in the flesh, because, as you can see from the pictures, by crikey it’s a cracking-looking thing.

Brabus gets its hands on Mercedes EQS