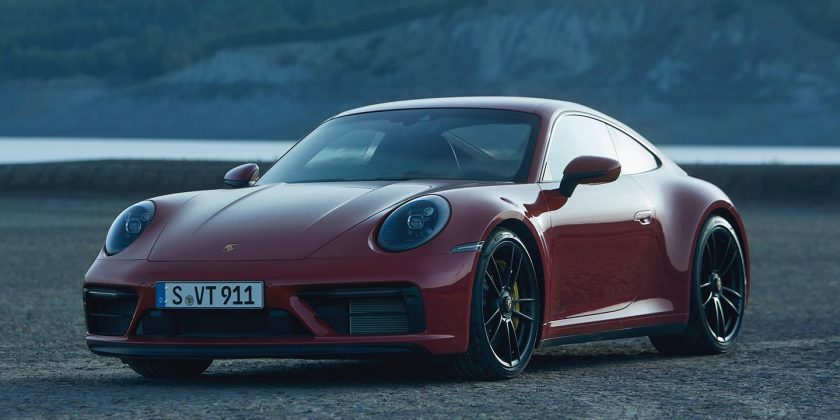 In a modern car world with as many twists and turns as an ITV soap, it’s reassuring to find a constant. The new Porsche 911 GTS is that kind of car. Everything that might be expected of a new GTS is here – those upgrades that have become familiar over the past dozen years of repeat appearances, with one or two extra features that will be welcome additions rather than unexpected add-ons.

Naturally, power is up modestly over the Carrera S, but still with a gap to the GT3. For this 992 version of the GTS, 480hp is the maximum output from the 3.0-litre twin-turbo flat-six, meaning 30hp more than both the old GTS and current Carrera S. Torque is up 14lb ft, to 420lb ft. Pleasingly, both seven-speed manual and eight-speed PDK will be offered; in its most accelerative spec – the four-wheel drive car with dual-clutch – the GTS will reach 62mph in 3.3 seconds. Which is berserk. The manual car features a 10mm shorter lever than standard, said to make shifts that bit slicker, and all models get a sports exhaust.

Chassis changes are as we’ve come to expect over three generation of 911 GTS, with the Sport chassis fitted as standard – bringing a 10mm drop in ride height, stiffer springs, “adapted” dampers and bars plus a tweak to the PASM control. There’s also a recalibration of the PSM stability control “to reflect the overall new dynamic properties”, rear helper springs donated by the Turbo, and uprated brakes – now with discs measuring 408mm up front and 380mm on the rear axle.

But, of course, a GTS is about more than just power and chassis changes – it must look the part, too. To that end the latest 992 features the SportDesign front apron, a black satin spoiler lip, unique rear lights, tinted PDLS (Porsche Dynamic Light System) headlights, new 20/21-inch wheels and black badges. The inside features plentiful Alcantara – or Race-Tex in Porsche speak – with a standard GT Sport steering wheel, Sport Chrono and the Sports Seat Plus. Sporty. Interestingly, some sound insulation has been removed for this GTS, said to further enhance the “emotive vocals of the charismatic powertrain”. Perhaps just as importantly, this 992 is the first car that Porsche’s latest PCM 6.0 will be fitted to, with Android Auto capability, ahead of its rollout across the rest of the 911 range.

One last thing, before getting down to your OPC to gleefully place an order. For the first time, the GTS is now going to be offered with the Lightweight Design package, albeit not until later in 2021. Porsche claims up to 25kg can be shed with the package, bringing CFRP bucket seats as well as both lighter glass and battery; it even goes as far as deleting the rear seats for the full cut-price GT3 vibe. When it becomes available, the Lightweight Design package will also include rear-wheel steer and “additional aerodynamic details”. So it might be worth holding off for a few months.

Those that can’t hold off for a GTS, however, will be pleased to know that the 992 in all its variants is on sale today, priced from £108,920 for the two-wheel drive Carrera GTS coupe. The four-wheel drive car kicks off at £114,500, with cabrios of both carrying a £9,980 premium. Those after a Targa 4 GTS will be asked for the same as a 4WD drop-top, at £124,300. Pitched (once again) as a model “between the Carrera S and the GT3 in its specification, power and potential”, don’t be surprised if (once again) the GTS become the pick of the Carrera range. Expect deliveries later in the summer.