“Concourse-level” is a phrase usually associated with anything that has achieved its finest form, but it’s especially true in the automotive world. Events celebrating this perfection are held in every corner of the planet, and among the most respected of these is the annual Amelia Island Concours d’Elegance, organized for the past 23 years on a small resort island just south of Jacksonville, Florida.

More than 300 cars and motorcycles come to compete in 35 classes, but even more vehicles are allowed entry as special guests to the event, which always brings out the local car enthusiasts, be it a Morgan roadster club or the area’s hot rod crowd.

But the event’s organizers are as serious as they come when it comes to the reputation and prestige of the show and its subsequent judging for top honors and trophies. Best in Show d’Elegance went to a ’29 Duesenberg J/SJ convertible (whose former owner once owned the Hope diamond) and the Best in Show de Sport Trophy was bestowed on a ’63 Ferrari 250/275P with an extensive European race-winning history. 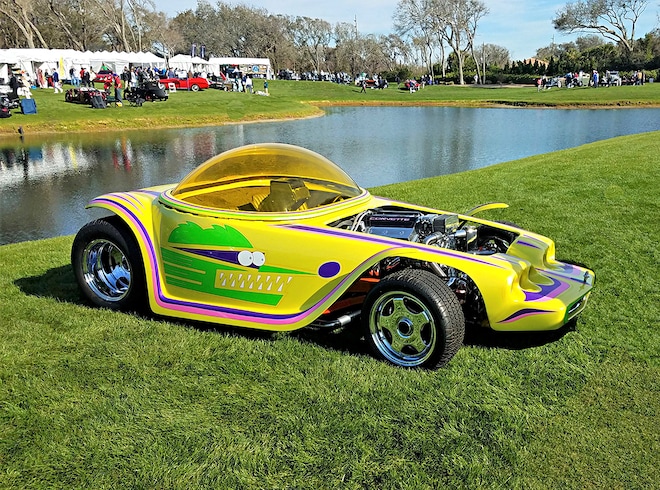 Two-time Indy 500 winner Emerson Fittapaldi treated the crowd to an exciting entrance when he drove one of his shrieking Indy cars onto the fairway and up to a displayed collection of his former Indy race cars. Other displays at the event included the (recently rediscovered) original Bullitt Mustang driven by Steve McQueen, a unique Porsche 356 built and owned by the late customizer Dean Jeffries, a group of IMSA GTP cars (each of which were fired up during the judging process), a selection of restored and original-patina electric cars that were 100 years old and, to showcase the wide scope of vehicles organizers feel are worthy of highlighting, a collection of cars originally built by one of the most colorful individuals in hot rodding’s history: Ed Roth.

Ed “Big Daddy” Roth’s career was certainly multi-faceted, and most folks will remember Roth by the early ’60s vehicles he and his crew built, but the empire Roth Studios created also included airbrushed monster T-shirts, decals, and a handful of motorcycle-powered trikes.

From the late ’50s, when the Olds-powered “Little Jewel” Model A sedan first hit the custom car scene, to the Stealth 2000, an open roadster built at the end of the last millennium, Roth created at least 19 custom creations. Many of his far-out cars became small-scale model kits (sold by Revell) and countless numbers of teenagers across America bought them up. 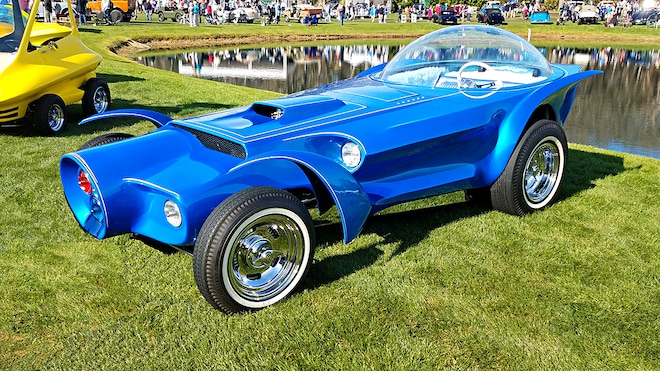 In 1966 Jim “Jake” Jacobs was just 20 years old when he started working for Ed Roth but, by then, the most famous of Roth’s creations (the Tweedy Pie, Outlaw, Beatnik Bandit, and the Orbitron) had already been built, but Roth’s fertile mind showed no signs of slowing down.

Jacobs was hired by Roth because he knew chassis specialist Dan Woods, who had met up with Roth when he was looking for chassis help for the Druid Princess. Roth Studio’s (they had “Monsters That Mean Business” printed on their business cards) employees at that time were Roth, artist Robert Williams, and Ed Fuller (who operated the T-shirt manufacturing side of the business). Artist Ed Newton also worked for Roth at that time, creating many of the crazy monster T-shirt designs based on a list of ideas that Roth would come up with.

Jacobs describes the typical body-building method at Roth’s as “After a chassis was built, Roth would pile a bunch of paper and boxes up on top of it to create a rough shape. Then he’d pour Plaster of Paris over everything and, after it hardened he’d shape his design into it. 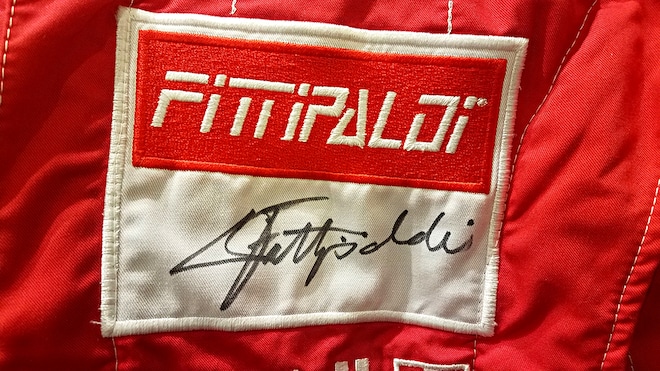 Fiberglass would be layered on top of the plaster and, after that dried, Dirty Doug (or just “Dirt” for short) Kinney would go in and carve out and remove all that Plaster of Paris. Then he’d grab a Roth T-shirt, pull it up over his head so his eyes would peek out of the neck hole, and grind that fiberglass to get the shape Roth wanted.”

Not long after the Druid Princess was finished Jacobs remembers Roth declaring “Hot rodding is dead. Motorcycles are the next big thing” and that ushered in the next phase of Big Daddy’s vehicles, the three wheelers, which started with the Mail Box (powered by a Crosley four-cylinder) in 1967 to, six trikes later, the Rubber Ducky in 1999.

Another alumnus of the ’60s-era Roth Studios is fine artist Robert Williams, who was 22 years old when he started working for Roth in ’65. Williams had met Roth at an Albuquerque car show in 1960 and wasn’t entirely impressed (he thought Roth had too much “carney” in him), but that changed when Robert went to an LA-based employment office and he was told about a job offering as an art director that no one would take for a business called Roth Studios. 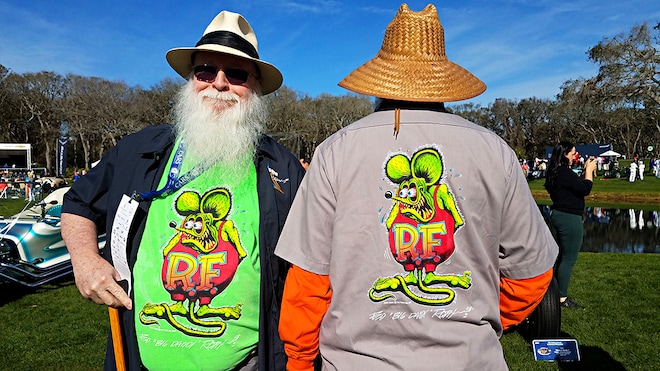 Roth hired Williams to create all of the advertising materials for his company, which was in the midst of changing from being car-based custom creations (the first one Williams saw built was the Wishbone) to the late ’60s-inspired motorcycle-based vehicles.

Williams saw Roth looked at things differently, saying “He took the American hot rod into the abstract. He created art. It wasn’t about if they could run or not, it was about creating subjective, not objective, art.” Williams points to the fact “They’re as hip now as they were when they first came around.”

It’s a fact evidenced by the popularity of the Roth display in the north-eastern corner of Florida at the 2018 Amelia Island Concours d’Elegance.  The well-respected show is in its 23rd year and celebrates unique, exotic, historic, and ultra-rare historic and vintage vehicles from varied automobile manufacturers from around the world, and a special show class was formed to highlight those early ’60s-era vehicles created by Ed Roth. And even though they were parked alongside some of the most expensive and rare vehicles on the planet, they were not out of place.

The gathering was conceived by automotive historian and writer Ken Gross (who had previously helped bring both hot rods and customs to the West Coast’s famed Pebble Beach Concours d’Elegance in years past), who commented on the collection of Roth cars that “Ed had his own vision” adding “He was the Picasso to everyone’s Rembrandt.” Even the Concours described Roth’s cars as “reality-bending customs of an era that thrived on American individualism run delightfully amok.” Folks who “experienced” the group of eight Roth vehicles gathered (the Tweedy Pie, Outlaw, Beatnik Bandit, Mysterion, Orbitron, Surfite, Beatnik Bandit II, and the Roth Studio’s F100 shop truck) would probably agree with the description, and they’d stop and stare (with a smile on their face) and explain to those who were not sure what they were looking at about Roth’s impact on the car show world, the art world, and even the 1960s as a whole. The cars were extremely well-received, and they got the imagination going of both young and old alike.

Robert Williams worked for Roth for five years (Robert’s wife, Suzanne, worked there, too) and can’t say enough about how honest, generous and kind Roth was, commenting that Roth’s ground-breaking vision was partially due to the era he was in “He had free reign to do anything. It’s not like today with the conformity that is expected.” No boundaries and free-form expression were at the cornerstone of Roth’s creations, it just so happens they were in an automotive form—the perfect example of what “rolling art” could be.

Roth saw the endless possibilities of what a vehicle could be, and wasn’t shy about pulling parts and pieces from anywhere he could to create something new. The list of powerplants in his rides was wide-based as well, included twin Triumph 650cc motors laid over on their side (for Rotar), a Crosley in-line four-cylinder (in the Mail Box), various VW flat-fours (the Wishbone), a Buick V-6 (in the Asphalt Angel trike), and big American V-8s, found in both the 1976 Yellow Fang streamline dragster (which ran 204mph @ 7.86) and the American Cruiser trike (yes, a V-8 powered trike!).

A Rat Fink Reunion celebrating Roth’s life has been held in Manti, Utah, since Ed’s death in 2001, and the 16th annual event was held in 2018 (Roth would have been 82 this year). But there is one thing that is for certain: Ed “Big Daddy” Roth’s influence will most certainly be felt for many more years to come.  SRM