Matt Murray / Pottstown, PA
When Matt Murray went looking for a new house, one of the key things he was looking for was adequate space to wrench on his cars. One of the houses listed had an “oversized three-car garage” with no photos. Like any true car guy, once he set eyes on the garage, he notes, “I decided to buy the house immediately after seeing the shop in person and worried about the house secondary.” What he had stumbled upon was pure automotive ecstasy. The house was built in 1930 and the shop was built during WWII—originally as an airplane hangar. The tracks for the original bi-fold hangar doors are still present in the ceiling. It was built into the ground with the walls made of fieldstone, which support the massive I-beams that hold up the roof. The open floor plan of the hangar made it the perfect workspace for his shop, named “Iron Trap Garage.” In the span of two years, he points out, “I’ve managed to fill it with cars, tools, and decorations that make it feel like it has been a hot rod shop since it was built.” When it comes to the work being done at his shop, he doesn’t have to travel far for supplies. Matt’s day job is marketing at the Eastwood Company, and he is also responsible for all of Eastwood’s How-To videos on the company’s YouTube channel. Matt also documents the progress on all the builds taking place at his shop on the IronTrap Garage YouTube page. 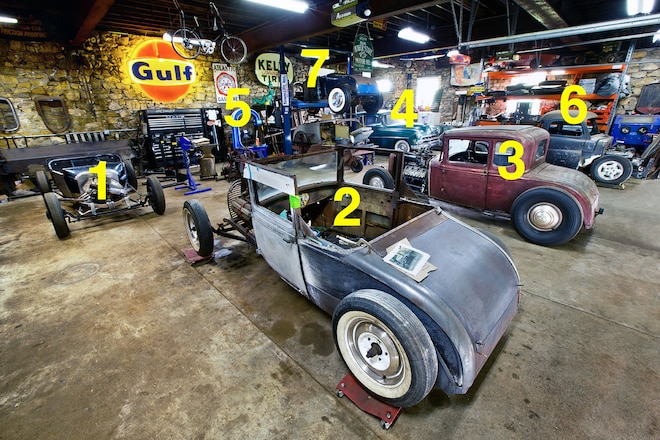 1. Matt converted this 1919 Ford Model T Touring into a roadster and dubbed it the “Free T.” It is mounted on a custom-built frame using sectioned 1948 Ford framerails with Model A crossmembers. It’s powered by a “Full House” 3/8×3/8 Flathead with early an Edelbrock intake, heads, and rare Scott-topped chrome Stromberg 97s. It is highly inspired by the Isky T, Black Widow, and Blackie’s “Shish Kebob.”

2. The “Sport Poupe” is a 1929 Ford Model A Sport Coupe that Matt built on a custom-fabricated chassis that has been channeled 4.5 inches with a Dodge Red Ram “Baby Hemi” and a 1939 Ford transmission. It sports a 1939 Ford truck grille sectioned 2-5/8 inches. Future plans are to chop it and remake a soft top to keep it a Sport Coupe. It will eventually be built in a 1960s show-car style.

3. The “Pagoda City Coupe” is a 1930 Model A coupe that Matt built in the East Coast style that was popular from the 1940s to the 1960s. It’s lowered and channeled 5.5 inches with no chop. The body was painted with a brush in the 1940s and has aged perfectly. It sports a custom-built frame that is stepped and swept to get the perfect stance. Power comes from a hopped-up 1942 Flathead wearing an original Thickstun Hi-Rise intake that he horse-traded with Gene Winfield. The engine wears a rare set of “AllState” (yes, sold by Sears) aluminum heads.

4. This one has been named “Frankie The ’52,” and it’s a mild Custom 1952 Chevy Styleline sedan. Matt found this car 3 miles from his house in a garage, where it had been sitting for 20-plus years. The car was bought by the owner’s grandfather new and passed down through the family before he got it. It’s currently getting rebuilt, which includes a hopped-up 235 straight-six built to make it “get up and go” a little better.

5. A key item in the shop is a vintage cast-iron FJ Edwards English wheel. This one was found in Gene Winfield’s shop sitting around unused. Matt bought it from Gene, and he offered to paint it with his signature “Winfield Fade” before shipping it to him. He’s since had the original upper wheel resurfaced and tons of parts made with the refurbished wheel. Matt claims, “It’s my favorite tool in the shop.”

6. This 1950 Dodge rides on a Chevy S-10 chassis. It’s a forgotten project that will be leaving the shop soon.

7. Matt named this 1930 Model A Roadster “Sweet Heart Roadster.” It was a barn find that he bought from the widow of the previous owner. She fondly remembered driving around in the car with her then-boyfriend before they got married, and which they kept until he passed away. They used to store it in a barn and the roof caved in, damaging the car, which prevented them from driving it again. It has a 331ci Cadillac engine with old speed equipment, a 1936 banjo rear, and will get a nice, shiny paint job.