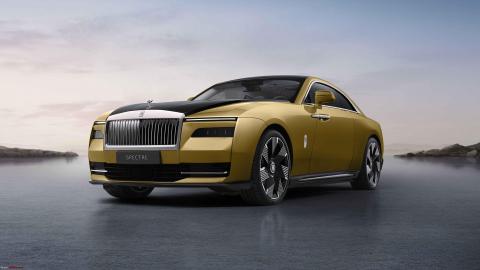 Rolls Royce also claims that the Spectre could propel itself from 0 – 100 km/h in 3.4 seconds

Rolls Royce has unveiled its first-ever all-electric car, the Spectre.

First teased over a year ago, the two-door uber-luxurious all-electric saloon marks the brand’s first step towards its transition to a pure-EV future in 2030. The Rolls Royce Spectre carries forward a familiar design, featuring a long bonnet, minimalistic profile and a fastback-styled rear. The Spectre measures over 5.4 m in length and 2 m in width.

In terms of design, the all-electric sedan features the widest-ever grille on a Rolls Royce for improved aerodynamic efficiency, a new ‘Spirit of Ecstasy’ on the bonnet, ultra-slim LED DRLs with the main headlamp cluster positioned separately below, aero-optimised 23-inch wheels, and a sloping roofline with vertical LED tail lights seamlessly integrated with the profile of the car.

Inside, the Rolls Royce carries forward all the luxury features and tech from its standard models, with a similar layout as well. What has changed is the Starlight liner, which now adorns the door panels as well as the roof. The Spectre also comes with new seats at the front and rear, featuring bespoke stitching, embroidery and intricate piping. The electric Rolls Royce also features a fully digital instrument cluster, along with a large touchscreen infotainment display at the centre; among plenty of other tech.

The Rolls Royce Spectre is based on the brand’s all-aluminium spaceframe chassis. However, the architecture on the Spectre is said to be 30% stiffer than on any previous models. The car also features active suspension and four-wheel steering as standard.

Rolls Royce is yet to reveal the final powertrain specifications of the Spectre. However, the company claims the all-electric luxury sedan should be able to offer 520 km of range (WLTP cycle). The electric powertrain could produce around 585 BHP and 900 Nm, sending power to all four wheels. Rolls Royce also claims that the Spectre could propel itself from 0 – 100 km/h in 3.4 seconds, which is impressive considering it weighs just under 3 tonnes.

Bookings for the Rolls Royce Spectre have begun, though its launch and deliveries are expected to take place sometime in the fourth quarter of 2023.