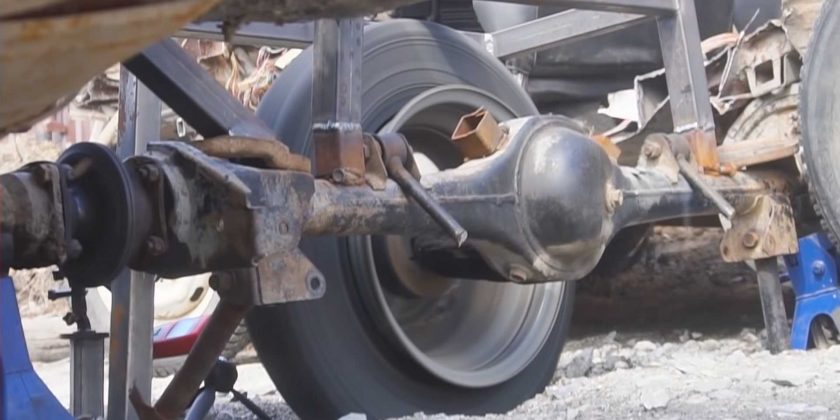 Weird things happen when a tire goes over three times its rated speed.

When you see a janky Lada in a Garage 54 video, you know something interesting is going to happen. When you see two Ladas connected by a solid axle and a single tire spinning frantically in the middle, the crazy factor goes off the scale. This time around, however, it’s not the Ladas that receive the punishment. It’s the poor snow tire stuck in the middle.

Welcome to the strangest method of tire torture you’ll probably ever see. Yes, we have two Ladas for this experiment, and if they look familiar, it’s because they were recently welded together to create a bonkers widebody monstrosity. They’re obviously separated now, but by bolting a solid rear axle to, well, another solid rear axle, the gearing makes the differential input shaft spin considerably faster than the axle. So why not bolt a tire to it? But wait, there’s more.

One might think such a test would be best suited for a high-performance street tire but come on, that’s not how Garage 54 rolls. Instead, the test subject is a Nokian Hakkapeliitta 8 snow tire, which has a maximum speed rating of just 118 mph. If that’s not sketchy enough, it’s a studded snow tire … with the studs still in place. For the record, there’s no blood or similar carnage in this video but in case you need a reminder, this definitely falls into the don’t try this at home category.

That should be abundantly clear as the tire is accelerated to over 5,600 revolutions per minute. Mind you, the tire’s rated speed of 118 mph should equal about 1,800 rpm so some quick math tells us this tire reached a speed equivalent to around 385 mph. That’s over three times its maximum rating, and it’s enough to literally stretch the rubber and break the steel belts inside. The tire doesn’t disintegrate, but a post-experiment inspection reveals its days on the road are well and truly over.

Which means we’ll probably see the misshapen tire return for a future Garage 54 experiment. Let’s hope they at least remove the studs this time.