The salt was cleaner than it’s been in decades, they said, and it was showing in the volume of 400-mph passes made by Danny Thompson, George Poteet, Robert Dalton, Rob Freyvogel, and Dave Spangler—driver of Team Vesco’s unique streamliner known as “Turbinator II,” winner of the HOT ROD Trophy for 2018 with a 438.038-mph flying mile. It is SCTA’s sole turbine-driven machine in a world of pistons. Instead of the Lycoming T-55’s output shaft spinning the rotors of a Vietnam-era Chinook, a compact all-wheel-drive system drives all four wheels on a custom set of tires. “Experimental, Not For Highway Use,” it said on the sidewalls, as if there were any confusion about the Bonneville specials. But for the HOT ROD Trophy, an award given to the team with the fastest wheel-driven flying mile during Speed Week since 1949, it became a stand-off on the salt until the very last minute. 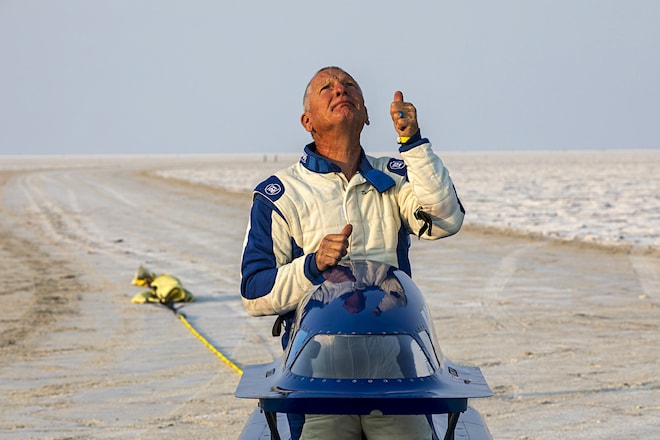 The week started with Danny Thompson laying down the gauntlet at 450.909, while also pushing the bar on his late-father’s unfinished record attempts in “Challenger II.” The 50-year endeavor sealed a family legacy that once left a lot of unanswered questions in the Thompson name, especially one concerning a 400-mph record at Bonneville. Mickey Thompson, Danny’s father, originally constructed Challenger II in 1968 out of a quiet shop in Long Beach, just off the Pacific Coast Highway. While it originally carried a pair of blown Ford SOHC engines, the combination was updated with a pair of nitromethane-craving Brad Anderson Hemis that produce more than triple the combined output of the old duo. Each 500ci engine shares a common driveshaft via a Gilmer beltdrive system, and power is split to all four wheels through a pair of custom-built, magnesium quick-change centersections. Besides a handful of body and aero tweaks, the last major improvement on his dad’s formula came in the front steering system, which used an arrangement more akin to a horse buggy than a 400-plus-mph streamliner. It was ditched in favor of a more conventional (and we use that term loosely in Land Speed Racing) set of steering knuckles. 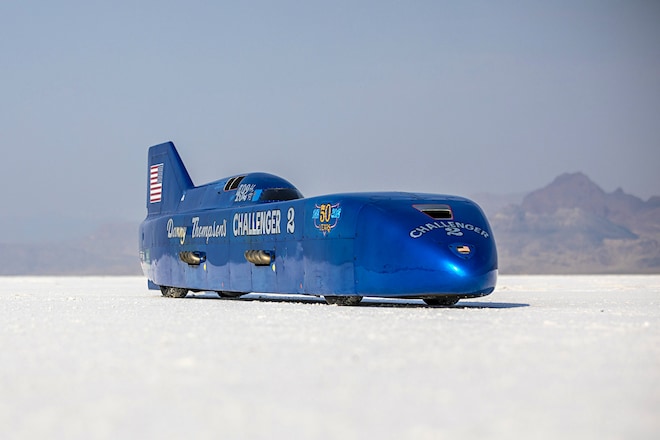 Danny had walked Challenger II up to the four-century mark before, but like his father’s attempts, a record-securing back-up run stayed just out of reach. He stepped into the 400 Club in 2016 when he piloted Challenger II to the AA/FS record of 406.769 mph and was seeking to edge the World’s Fastest Piston-Driven Vehicle title up a few notches in 2018 while challenging his own AA/FS record. While the former is up for argument—whether you measure your records on the SCTA’s or FIA’s scales—the latter raised the AA/FS bar to an average of 448.757 mph after Sunday’s 450-mph shot across the salt, but the week was still young and another familiar streamliner came swinging for Thompson’s claim at the HOT ROD Trophy.

With seven consecutive years of ownership, “Speed Demon,” driven by George Poteet, quickly responded with a 452.255-mph blast the following day. Built after rolling the 300-plus-mph Poteet & Main Speed Demon in 2014, the new machine was a single-engine, rear-wheel-drive streamliner built around a fleet of turbocharged small-blocks of different displacements so that Speed Demon could chase a number of records. The chassis was built around this modular engine program, and the byproduct of this is that it allows guys like Kenny Duttweiler to experiment with a myriad of ideas with each class’s displacement package. 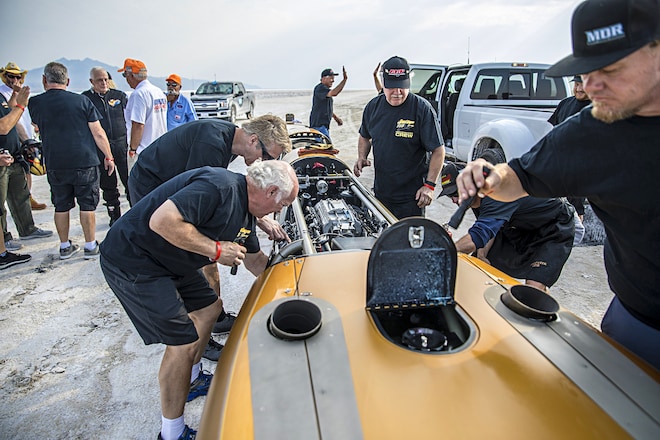 With their B-class engine between the framerails of the gold streamliner, the Speed Demon team managed to nudge the trophy out of Danny’s hands just a few hours after he claimed it. Sometimes when you’re on the bleeding edge, as Danny’s Challenger II and George’s Speed Demon are, a little blood is spilled in the process—such was the case for Speed Demon when it ate the 388ci B-class motor. They would come back with the A- and C-class engines throughout the week, but damaged turbos and other minor mechanical issues prevented Speed Demon from showing its true potential this year. George, an experience land-speed racer, was patient and conservative with the car throughout the week, preventing these minor setbacks from stacking up into anything major, and they fought to the very end, being one of the last machines to chase the horizon during Speed Week 2018 in an attempt to defend the title.

We want to reach for a cliché like, “the shot heard across the salt came from Team Vesco’s 463.038-mph pass,” but to be honest, the Lycoming T-55 turboshaft-driven steamliner can barely be heard once it’s a few yards away. No thundering V8s, like most of Bonneville’s contingency, just the howling whistle of an 18,000-rpm turbine. 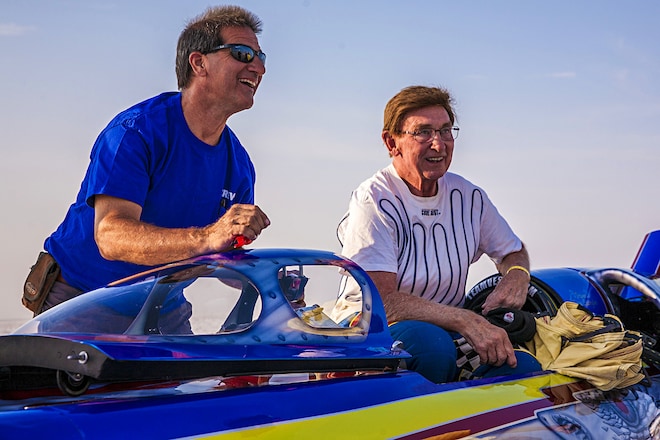 The original “Turbinator” was driven by the late Don Vesco, the brother of team manager Rick. “This car was designed around two Chevrolet small-blocks when we originally built it in 1988,” he told us. The team campaigned No. 111 until it gained the gas turbine engine for their famous record attempts in 2001, which brought them a record for a wheel-driven vehicle at the World Finals while winning the HOT ROD Trophy months earlier during Speed Week, with a flying mile of 459.021 mph. Gray Baskerville infamously tried to throw them out of the running for the trophy, as Turbinator wasn’t piston-driven (and that disqualified them, in his eyes), but cooler heads prevailed in reestablishing the original rules by Wally Parks—and that means any wheel-driven machine, regardless of the powerplant. Winning the prior year in a streamlined motorcycle might’ve been the last straw for “Ol’ Dad” Baskerville, but Team Vesco didn’t mind pushing a few buttons in the pursuit of speed.

Despite Turbinator breaking 450 mph consistently, it was due for upgrades by 2008. They learned that the positioning of the gearbox that connected the turbine’s output shaft to the all-wheel-drive system was blocking airflow to the turbine itself. They were having to string the engine out unnecessarily with the restriction, which caused some overheating issues. Furthermore, the body was starting to create lift at high speeds, according to Rick. “It was squatting in the back and it was lifting in the front. So when I redesigned this thing, we made a whole new body. I put more downward pressure on the nose, adding 16 inches there,” he recalled. “And I added 28 inches in the middle to move the gearbox forward.” The last major addition was a third parachute for extra stopping power and a folding enclosure that cleaned up the tail end’s aero by concealing the parachutes until they deploy. 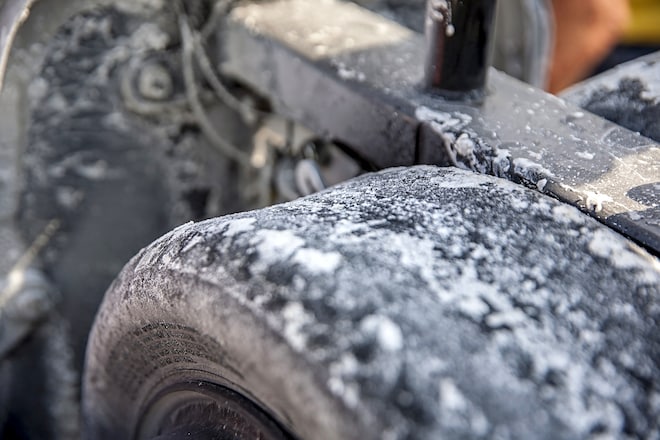 All of this was wrapped in a new paint job by Count’s Kustoms, with a dedication to Don hand-painted on the nose with a very Skynet-inspired eagle along the flanks of the newly dubbed Turbinator II. The new engine and gearbox packaging allowed for improved airflow, which meant that drivers Dave and Eric Ritter could stay in the throttle longer, utilizing the T-55’s 4,000-plus-horsepower. Thanks to the improved aerodynamics, 500 mph looked possible, thanks to the newly found stability. “The biggest challenge from the driver’s point of view is just being able to relate to the speeds. At 700 feet per second [approximately 470 mph], things are a lot different than they are at slower speeds,” driver Dave explained. “It takes a level of concentration where I don’t have time to look at anything else, except to just drive the car. You’re constantly steering at those speeds. You’re trying not to become a passenger and that means staying ahead of the car.”

More than just the accomplishment of breaking the five-century mark in the pursuit of a record, for Team Vesco, it’s about carrying Don’s legacy to its conclusion; Turbinator II’s ultimate 500-mph goal, set in motion by him, is still hanging out there. With good salt under the wheels, Turbinator II made a show of force shortly after Speed Demon made its 452-mph pass. Dave was a little heavy with the throttle early in the run, which caused it to spin for nearly 2 miles, but once it dug in by mile 3, Turbinator II was hustling across the best salt it’d seen in decades—463 mph kicked the bar up a few notches, which gave Team Vesco a little breathing room. Just three days into the event, we’d seen the trophy change hands three times, but this created a quandary for Team Vesco. 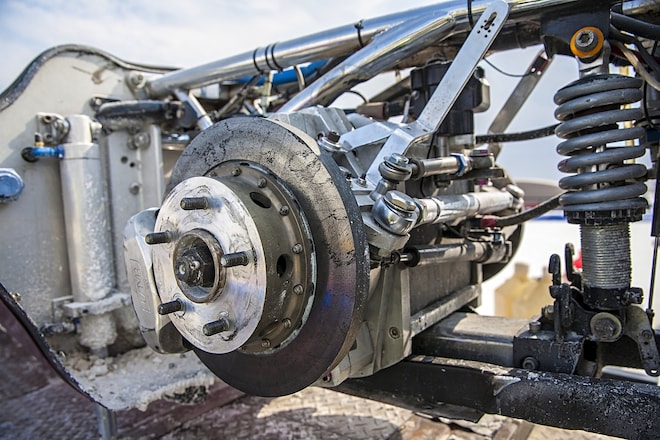 They had already broken the Bonneville record they were coming for in T/3 and were ready to take it easy that week, and Danny Thompson had announced he had settled his score with the salt with his new AA/FS record and was planning to retire Challenger II, but George Poteet’s Speed Demon kept charging for the trophy every day or so. This meant that Turbinator II was kept in running order each day, which included such off-the-wall maintenance as running the tires up to 300 mph while the car is on stands so the bias-ply tires can stretch back round. While this kept the team on high alert any time George’s name was called across the radio from the start line, the team members were confident they had secured the HOT ROD Trophy. In fact, they had to keep it ready to roll right to the very last hours, including sending the car down for an additional qualifying run to maintain a spot in the final run group, where Speed Demon was preparing a Hail Mary.

“We’re trying to do what Don said it could do: 400 mph in the quarter and 500 mph out the back, and we’ll get right close,” Rick told us. At a later Utah Salt Flat Racing Association meet, Turbinator II managed a 492-mph exit speed under Dave’s guidance, placing them within earshot of the team’s ultimate goal. If Bonneville’s surface stays as smooth and solid as it was this year, 2019 might be Team Vesco’s best shot ever at it. 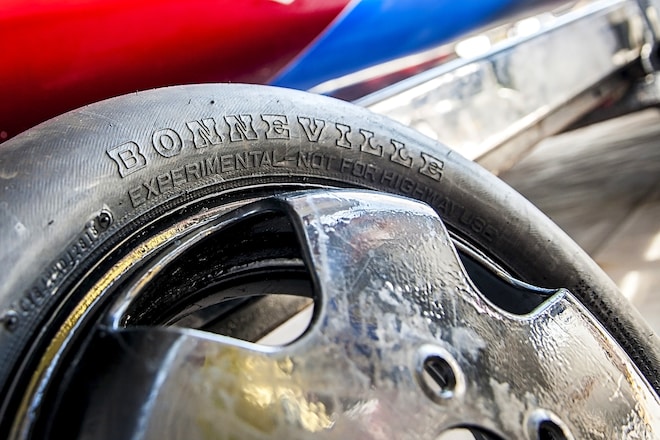 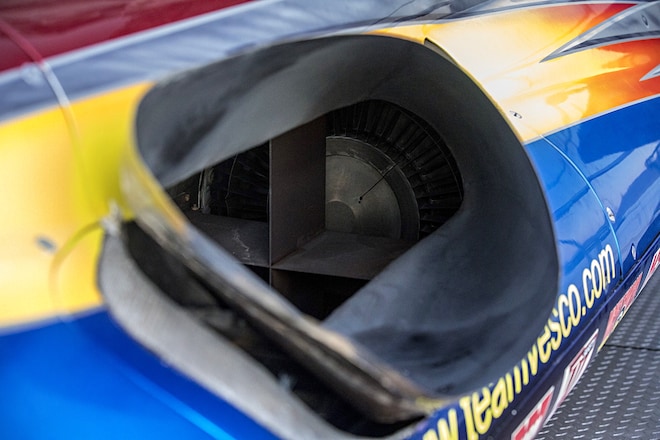 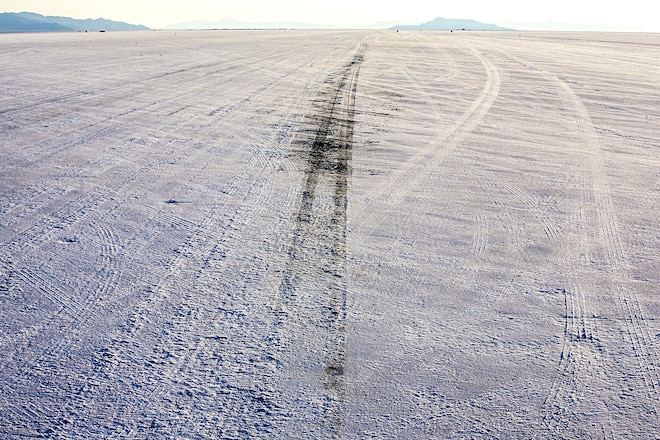 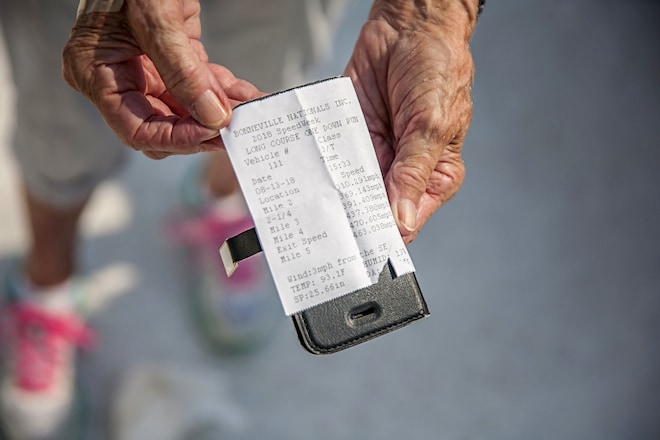