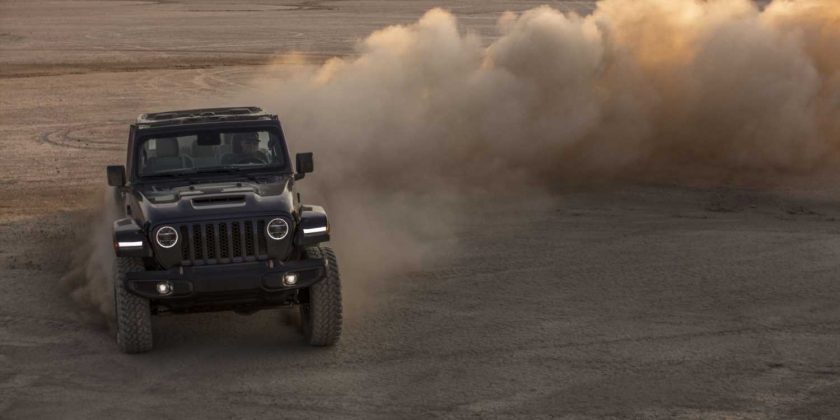 Jeep has teased a V8-powered Wrangler multiple times, from the Hellcat-powered Jeep Trailcat Concept to the more recent Wrangler 392 Concept. Now the teasing is over and the reality is the 2021 Jeep Wrangler Rubicon 392. As the name suggests, this does have a Hemi under the hood. Alongside the engine, the Rubicon 392 has a host of other features aimed at making this Hemi-powered Wrangler capable of hitting the trails.

Obviously, the star of the show is the naturally aspirated 6.4-liter Hemi V8. Compared to its Charger and Challenger tunes, this 6.4-liter V8 is down on power, but not much. This Hemi sends 470 hp and 470 lb-ft of torque through the eight-speed automatic. From there, the power travels through a Selec-Trac two-speed transfer case and Dana 44 axles fore and aft before hitting the pavement via 33-inch tall tires. Unlike other Wranglers, this Jeep uses a full-time all-wheel-drive system, but you’re going to want as much grip as possible to help bite the pavement.

The Rubicon 392’s numbers are considerably more impressive than the 3.6-liter V6-powered model’s. For example Jeep says the V8-powered Wrangler can sprint to 60 from a dead stop in only 4.5 seconds, reportedly 40-percent quicker than V6-powered variants.

Feeding that V8 engine is a new, bespoke hood with a functional scoop and an interesting system to keep water out of the engine. While the hood scoop works to bring fresh air feeding the Hemi, to help keep the engine breathing air instead of water Jeep developed a three-level duct system with drains to help keep water out. Dubbed the Hydro-Guide, this system can reportedly separate up to 15 gallons of water per minute from hitting the engine, helping to keep you from hydro locking your new toy. Jeep says this is all good enough for you to safely cross up to 32.5-inches of water.

The extra stress of the 6.4-liter Hemi forced engineers to upgrade various parts of the Wrangler’s underbody, too. Upfront, the frame was upgraded and Jeep also beefed up the upper control arms and steering knuckles to better manage the extra power.

There’s no word on price, but you can expect this Hemi-powered Wrangler won’t be cheap. It would be no surprise to see the 392 start around $50,000, but we won’t know for sure until it gets closer to the showroom, projected in the first quarter, 2021.