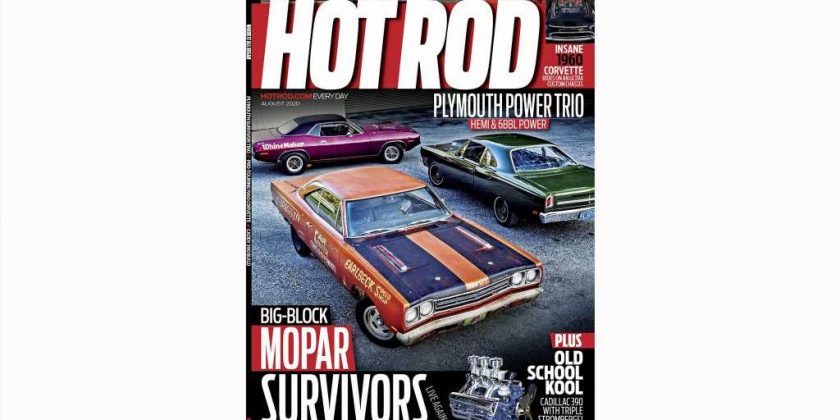 The August 2020 issue of HOT ROD features a trio of Plymouth survivor cars, and some really solid engine tech.

The new issue of HOT ROD is out right now (as of June 26, that is), and you really should grab a copy. Why? Well, how about the three awesome Plymouths on the cover. They are all survivor cars that belonged to an individual who recently passed away. His daughter wanted to see them on the road again, so one has been restored, and the other two fixed up and gotten running again. It’s a cool story, and these cars are time capsules of the Street Machine era of the late ’70s and early ’80s.

If old engines make you feel nostalgic, odds are you’ll like the Cadillac 390 engine build. This 1961 block is a direct descendant of Cadillac’s first overhead valve engine, which debuted in 1949. Though the look of the finished engine is old-school, modern technology lurks inside, in the form of custom forged pistons designed from 3-D scans of the originals. They feature an updated dish design and a modern ring pack. The triple Stromberg carburetors on the Offenhauser intake drip with nostalgia, and this engine is destined for a ’34 Ford.

Modern engines need some love, too, and Dyno wizard Richard Holdener compares long-tube headers to the original cast-iron exhaust manifolds on a 5.7L Hemi engine. Some myths were definitely busted in this piece.

If you have tech questions that need to be answered, Marlan Davis is our man on that job. In this issue, he takes on the notion of swapping a gasoline-burning 460 in place of a 6.9L diesel in an ’85 Ford 150. That old oil-burner gave up the ghost and either needs to be rebuilt or replaced. Marlan walks through the parts needed to drop a torquey 460 in its place. From clutches and bellhousings to motor mounts and fuel system changes, Marlan has it covered.

Also, have you ever wondered if you could run solid lifters on a hydraulic lifter cam? Marlan has that answer, too.

There’s all that plus a lot more stuff you won’t see online in the August 2020 issue of HOT ROD! Grab your copy today.