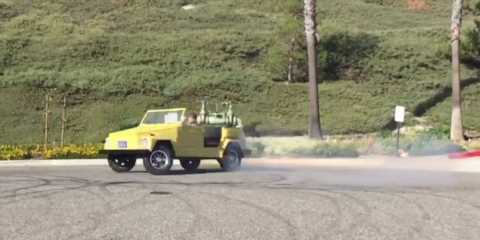 A wild trademark appeared recently on the European Intellectual Property Office. The brand is claiming the name ID. JUNGLEZZ for use on a vehicle.

I don’t think I really have to tell you that this will likely be applied to an EV but just which EV is interesting. The name, back in August, was tied to a reimagined ID version of the Thing/Kübelwagen/Type 181.

This plan was outlined in the UK’s Car Magazine, which claimed that VW is working on a Suzuki Jimny-like EV called the Ruggedzz. That, though, may also become a Skoda, so the rumors are all a bit of a mess.

Volkswagen has previously intimated that it would like to build an electric version of the thing. The brand wants to use its history to sell EVs but is still claiming that it won’t make an electric Beetle for fear of repetition repetition.

All this talk of Skoda may have you thinking this is a Europe-only story, but there is a glimmer of hope. This week Meyers Manx sold to new buyers who are talking about a bold future with new adventures on the way. An off-roader based on VW’s MEB chassis might be just the thing. Mind you, they may prefer to take over the mothballed ID. Buggy.