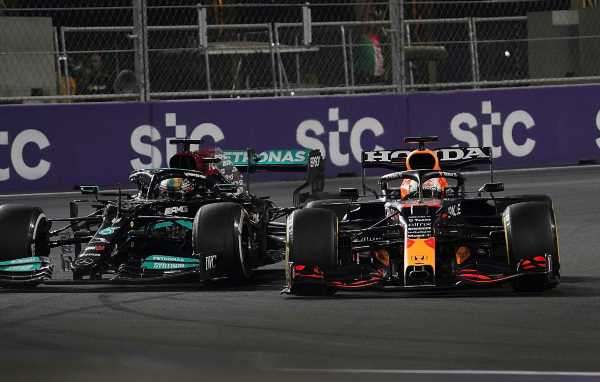 Penalised in Saudi Arabia for what in Brazil went unpunished, Max Verstappen says he gave up on the win after being told of his five-second penalty.

Verstappen and Lewis Hamilton put on a thriller at the Saudi Arabian Grand Prix, the title protagonists racing wheel-to-wheel no fewer than three times.

One of those battles, on lap 37, saw Hamilton get a run on the Red Bull driver, using DRS to attempt a pass around the outside at Turn 1.

Verstappen defended with both drivers off the track, and the Dutchman holding onto P1, similar to what happened at Turn 4 at the Sao Paulo Grand Prix.

This time, though, the championship leader was given a five-second penalty for for leaving the track and gaining advantage.

Could Lap 37 in Jeddah be one of the defining moments of the season? 🤯#SaudiArabianGP 🇸🇦 #F1 pic.twitter.com/vfrLzUVJW9

“When they told me that I had the five-second penalty, it was not worth fighting anymore because I would never pull a gap of five seconds,” Verstappen said.

“So yes, a lot of action, a lot of things that happened.

“I think ultimately, we didn’t really have perfect pace in the race, maybe also the medium tyres were not amazing to the end. I think the hard tyres [of Hamilton] had a bit more life in them I think, but as always, it’s easy to say afterwards.

“At the end, that five-second penalty I don’t think is correct but at the end of the day I don’t want to talk about it that much because they don’t deserve any words coming out of my mouth.

“I find it interesting that I am the one who gets a penalty when both of us ran out of the white lines.

“In Brazil it was fine but suddenly I get a penalty for it; you could see both of us didn’t make the corner. But it’s fine, I also don’t really spend too much time on it. We have to move forward.”

Told to give the position back to Hamilton after that lap 37 moment, Verstappen slowed only for Hamilton to also slow down and stay behind him.

The Dutchman then braked, and Hamilton drove into the back of him ripping off the right-side of his front wing.

“They told me to give the position back,” Verstappen explained, “and so immediately when I heard that on the radio I just pulled off to the right, showing that I was going to move over, and I braked, downshifted, and he just stayed behind me.

“So I was just looking in the mirror and I’m slowing down and I think there was a bit of a miscommunication and he ran into the back of me.”

Verstappen was given a post-race 10-second time penalty for erratic driving.

Hamilton won the grand prix and took the fastest lap point with Verstappen P2 despite his time penalties.

The two go into the final race of the season, Abu Dhabi, tied on points but with Verstappen P1 by virtue of more wins.

Verstappen said: “We are equal on points now, and I think that’s really exciting of course for the whole championship and Formula 1 in general… Yes, it will be decided there, so hopefully we have a good weekend, so let’s see.”