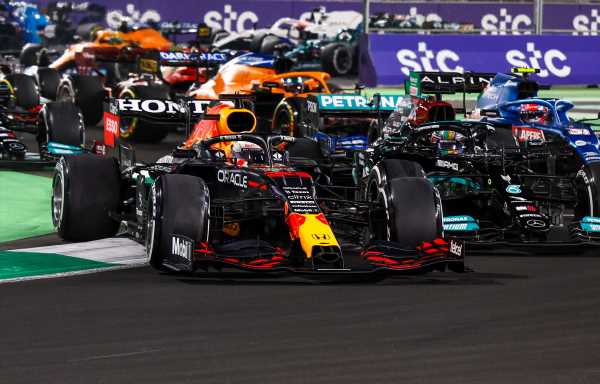 Red Bull are once again unhappy with F1’s stewards, Helmut Marko adamant Max Verstappen did not brake test Lewis Hamilton and the Brit “crashed into our car”.

Sunday’s Saudi Arabian Grand Prix offered up several contentious moments as Verstappen and Hamilton race for the victory, and ultimately the World title.

The two had moments at Turn 1 with Verstappen mounting the kerbs, and was on both occasions he was told to give the position back to the Mercedes driver.

But while the first moment was decided during a race flag, Red Bull agreeing to drop Verstappen behind Hamilton despite Esteban Ocon having all passed the Brit, the second saw the two collide.

Getting a run on Verstappen on lap 37, Hamilton made his move, both went deep into the run off, and Verstappen came out still up in P1. This time giving the position was an on-track moment with Dutchman slowing to let Hamilton by.

The Brit, though, also slowed down with Verstappen then braking, and Hamilton driving into the back of him.

Verstappen was given a 10-second penalty for erratic driving, and another five second one for forcing Hamilton off the track in his earlier defending.

Could Lap 37 in Jeddah be one of the defining moments of the season? 🤯#SaudiArabianGP 🇸🇦 #F1 pic.twitter.com/vfrLzUVJW9

Marko feels that was unfair, especially as Hamilton wasn’t penalised for falling more than 10 car lengths behind Verstappen as they lined up for a second restart.

“Our engineers are preparing that we can prove Max was constant with his braking, he didn’t brake test like Hamilton said,” Marko told Motorsport.com.

“Then he crashed into our car, he unfortunately put two cuts in the rear tyre. That was so severe that we couldn’t attack anymore. We had to take speed out.

“That was the one thing.

“The next thing was at the second start, Hamilton was more than 10 [car] lengths behind. [Sebastian] Vettel got penalised in Budapest when he did it. But with this manoeuvre he [Hamilton] was preparing his tyre better for the start.

“Then he pushed Max off, no reaction. So we feel we are not treated the same.”

Hamilton declared after the race that Verstappen was “over the limit” but Marko disagrees.

“I don’t think there is any reason why he should cool down,” Marko said.

“And just remember what happened in Silverstone, what’s happened in Budapest. Don’t forget that.”

Hamilton won the grand prix and took the fastest lap point with Verstappen P2 despite his time penalties.

The two go into the final race of the season, Abu Dhabi, tied on points but with Verstappen P1 by virtue of more wins.