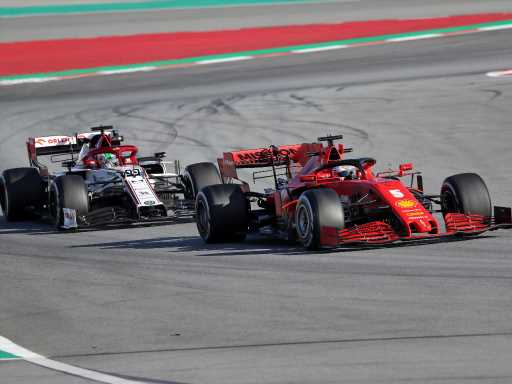 Antonio Giovinazzi says it feels “strange” when he has been battling with Ferrari’s Sebastian Vettel during a race.

Such has been Vettel’s struggles in 2020 the four-time World Champion has often been battling in the lower ranks of the midfield on race day, a place where you can often find Giovinazzi in the underwhelming Alfa Romeo C39.

Giovinazzi is also the third driver for Ferrari, so to be battling with the works car on several occasions in 2020 has been quite “emotional”, especially when it’s Vettel who he’s fighting.

“First of all, it’s nice to fight with a Ferrari, because it doesn’t happen often,” he told Motorsport-Total.com.

“I remember the Eifel Grand Prix, where he was breathing down my neck during 80 percent of the race and was ready to attack me.

“After all, he is a four-time World Champion with a lot of experience. It was difficult to keep him behind, and at the same time it was nice to finish ahead of him. These are wonderful emotions.”

Giovinazzi added that he knows Vettel well on a personal level and has great respect for the 53-time race winner, making any battles they have in the race extra special.

“It is strange. It doesn’t happen in every race, but when it does, it’s nice, also because I know Seb well and I had the chance to work with him when I worked a lot on the car’s development on the simulator in 2017 and 2018. I also value him very much as a person,” he explained.

“When you fight with a champion, you have the chance to learn something from the cockpit as well.”

Vasseur told that Haas is much closer to Ferrari than Alfa Romeo : "I don't want to criticise the Haas model, as everyone has their project, their structure, their constraints." #F1 pic.twitter.com/estQvCImz7

For Vettel at least the Ferrari SF1000 has been a real handful and he has never been able to get comfortable with the car.

That reflects in the fact Vettel is all the way down in P14 in the Drivers’ Championship, while his team-mate Charles Leclerc is P5 with 67 more points.

So, how do the SF1000 and the C39 compare in Giovinazzi’s opinion since he surely got the chance to try it out in the simulator?

“Yes, I tried it, but believe me, it is difficult to make comparisons because the two simulators are very different,” he said.

“It is difficult to say whether it is better here or worse there. I prefer not to make comparisons.”