This coming week is one of Japan’s biggest annual holidays: Golden Week. To celebrate — and also to mark the hiatus in world affairs right now — GT Sport and Red Bull are running a competition in the game.

Red Bull Beat the Pro is a Sport Mode hot lap contest. The event will run through all of Golden Week — April 29 to May 6 — and will consist of a time attack that players can access within the game’s Time Trial mode.

Why “Beat the Pro”? Three of Red Bull’s motorsport athletes will set reference times for you to challenge. Juri Vips of Team Mugen (Honda), 2017 Super GT champion Ryo Hirakawa of Team Impul (Toyota), and 2019 Super Formula champion Nick Cassidy of Team TOM’S (Toyota) will set benchmark times that you have to try to beat. Not only that, they’ll continue to race during the time trial period, and may well improve… 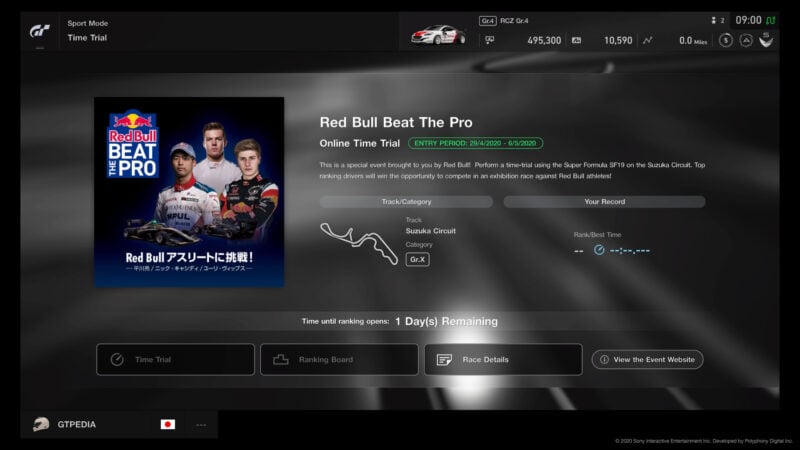 Unsurprisingly then, the event will use the 2019 Super Formula SF19 cars added to GT Sport last year. While Super Formula events usually — though not always — only allow you to use either the Honda or Toyota model, both cars appear to be eligible.

The time trial will use fixed settings, so all you need to do is lap the Suzuka Circuit as fast as you can. For reference, the pole position time in the 2019 Super Formula race with these cars was 1:36.060, set by Tadasuke Makino in the Nakajima Racing Honda. Hirakawa was fastest of the drivers in the Red Bull event at 1:36.824.

Those who have the three fastest times at the end of the event, along with three further participants from the eligible entries by a random draw, will receive a prize coupon for Alpha Tauri fashion wear worth around $300. The GT Sport website also mentions that the top times will be eligible for an exhibition race with the Red Bull athletes later in the year.

Of course to be in with a shout of the prizes you must be resident in Japan, but to access the event and compare your time, all you need is a Japanese PSN account.