Many car fans, if they’re fortunate enough to go racing, will be happy dodging autocross cones. Others will go wheel-to-wheel in LeMons or Chump Car events, or weld a roll cage into an old Mazda Miata. And some amateur drivers (and budding professionals) get to blast around world-famous circuits in a factory-built Ferrari racer. Specifically, a Ferrari 488 Challenge race car.

After testing this 661-horsepower mid-engine brute over two days and dozens of laps at Laguna Seca Raceway in California, I may never look at a Miata the same way again. I’ll definitely never feel a Miata the same way—not after contorting myself into the Ferrari, hooking up my HANS device and twirling through Laguna’s famous Corkscrew.

More than 1,000 gentleman (and gentlewoman) racers have participated in the Ferrari Challenge on three continents since the series began in 1992, making it the world’s oldest single-marque spec series. In North America, the Challenge started with race-modified Ferrari 348s in 1993, then evolved through the 355, 360, F430 Challenge, and 458 Evo models. Owner/drivers attend Ferrari’s Corso Pilota racing schools and join dealer-managed teams that bring a full turnkey racing experience—vehicle transport, a race crew and mechanics, hospitality, and more. (Serious resources can be involved: One of the most successful teams, California-based Scuderia Corsa, is fielding 15 cars the weekend I’m at Laguna Seca, in both the Challenge and the team’s professional, championship-contending Ferrari IMSA entries at Mid-Ohio Raceway.)

Skill levels do vary widely, which is why Ferrari sensibly separates the field into four divisions. Those top out with Trofeo Pirelli, which saw 25-year-old Cooper MacNeil—who also drives an IMSA Ferrari—win Saturday’s opening race. 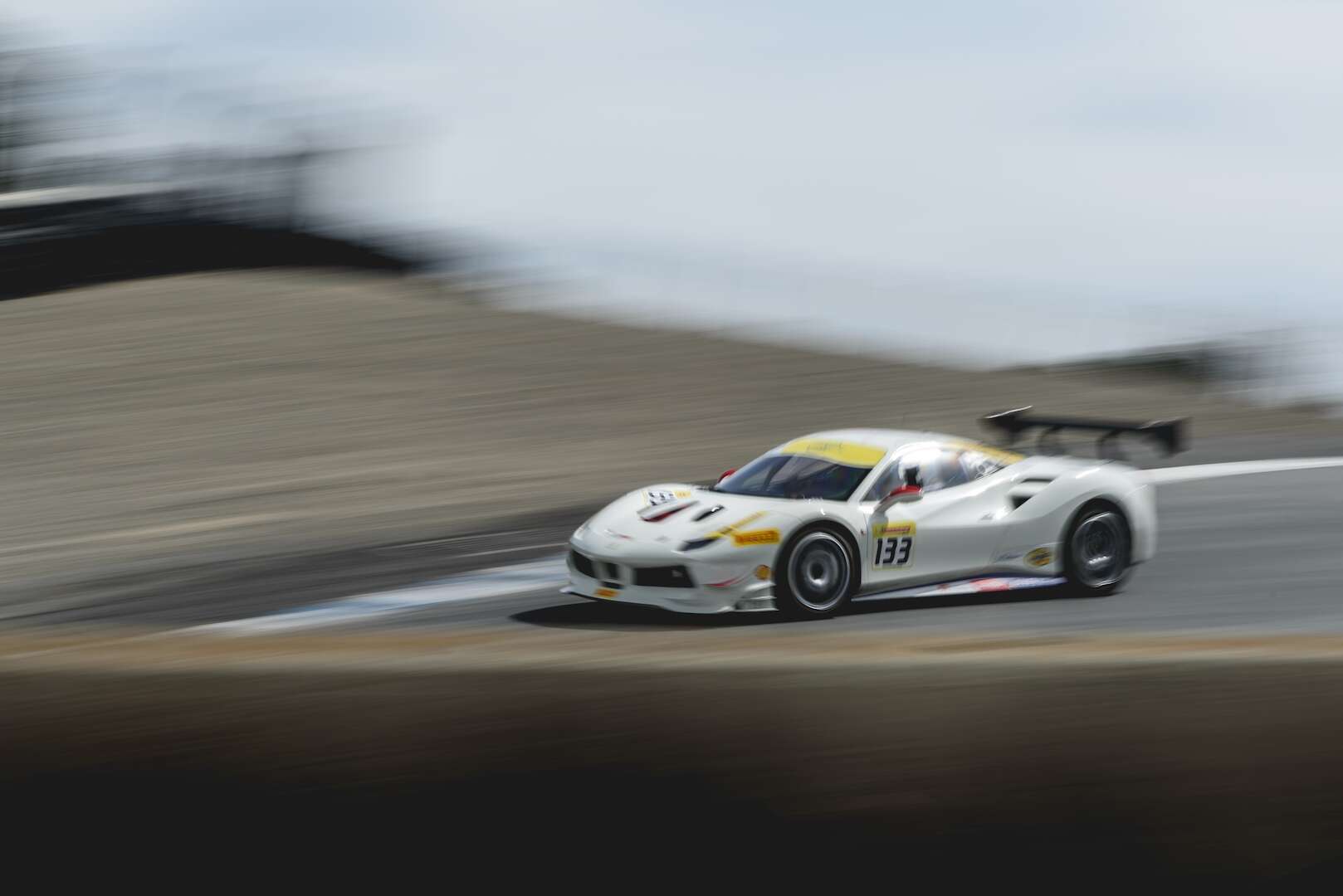 Things get blurry in a hurry in the 661-hp Ferrari

From afar, it may be easy to scoff at the Challenge as mainly rich dudes (or scions of rich dudes) indulging Walter Mitty-esque Michael Schumacher fantasies. But when I talk with Challenge drivers, including two amazing women competitors in the 458 Evo class— Eileen “Big Red” Bildman and Lisa Clark—it’s clear that gasoline runs in their veins far more than money. Truth is, these are lifelong, passionate car nuts; otherwise they’d never invest this kind of cash, time and effort.

Clark grew up riding dirk bikes in Phoenix, and remembers watching the legendary Shirley Muldowney drag race at nearby Firebird Lake. She bonded with her single father over their love of desert motorsports, and they spent a summer rebuilding her first car, a mud-bogging Jeep CJ-5. Today, in addition to racing her Ferrari, Clark is returning to her desert roots by racing a Formula X crosskart. 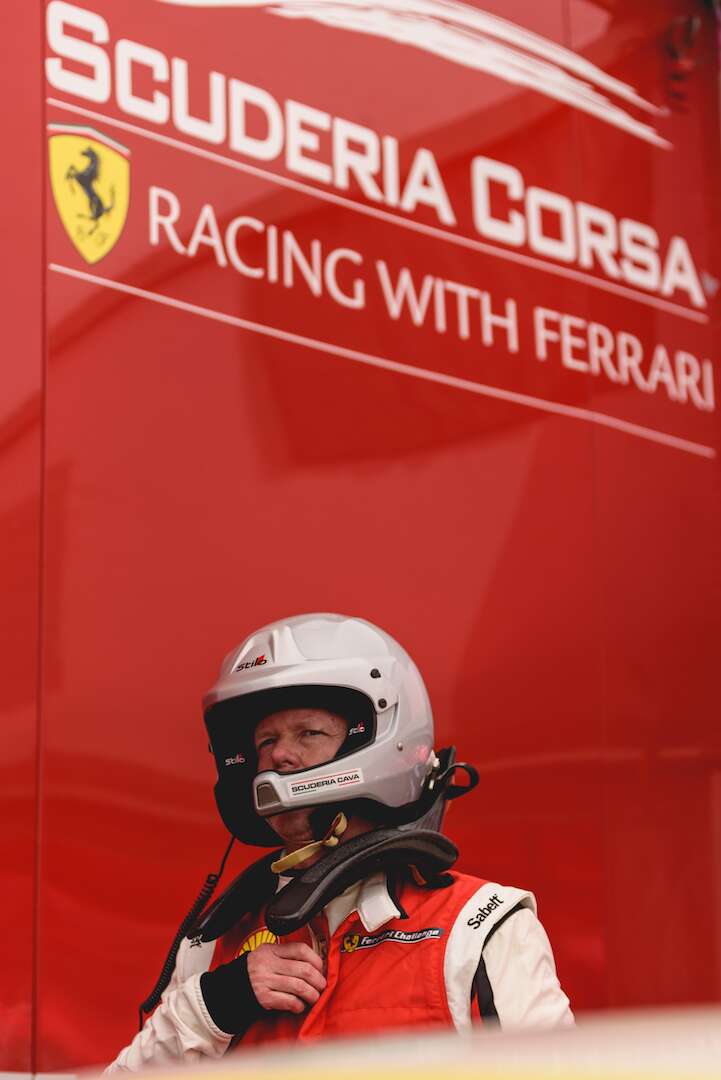 Safety first in the Challenge, including a critical HANS device

Bildman, on the other hand, was cleaning pistons and carburetors at Howard’s Auto Service—her grandfather’s Baltimore repair shop—by age 6 or so. Her father, after leaving the shop to become a state police officer, helped get her out of speeding tickets, and she eventually came to own cars (usually in red, to match her hair) such as Mustangs, Mercedes-Benzes, and a black Ferrari Testarossa used in the filming of the Miami Vice TV show. But as of 2014, “I still didn’t know what an apex was,” Bildman says. She started racing a Miata, until a gruesome accident at Summit Point in West Virginia sent her Mazda over a barrier, tore a tendon off her right arm, and required plenty of steel and screws to fix.

“I have the bionic elbow now,” Bildman says with a smile, pulling up her Nomex sleeve to show the long scar below.

Bildman races her bright-red 458 Evo in memory of her son, Kevin Clarke, who was murdered in 2002 at age 22. She advocates for victim’s rights, including speaking on Capitol Hill, and her Ferrari is adorned with “79” to commemorate her son’s birth year.

Racing, she says, “would have been his true love. I feel like he’s the person on my shoulder saying, ‘Mom, you can do this.’” 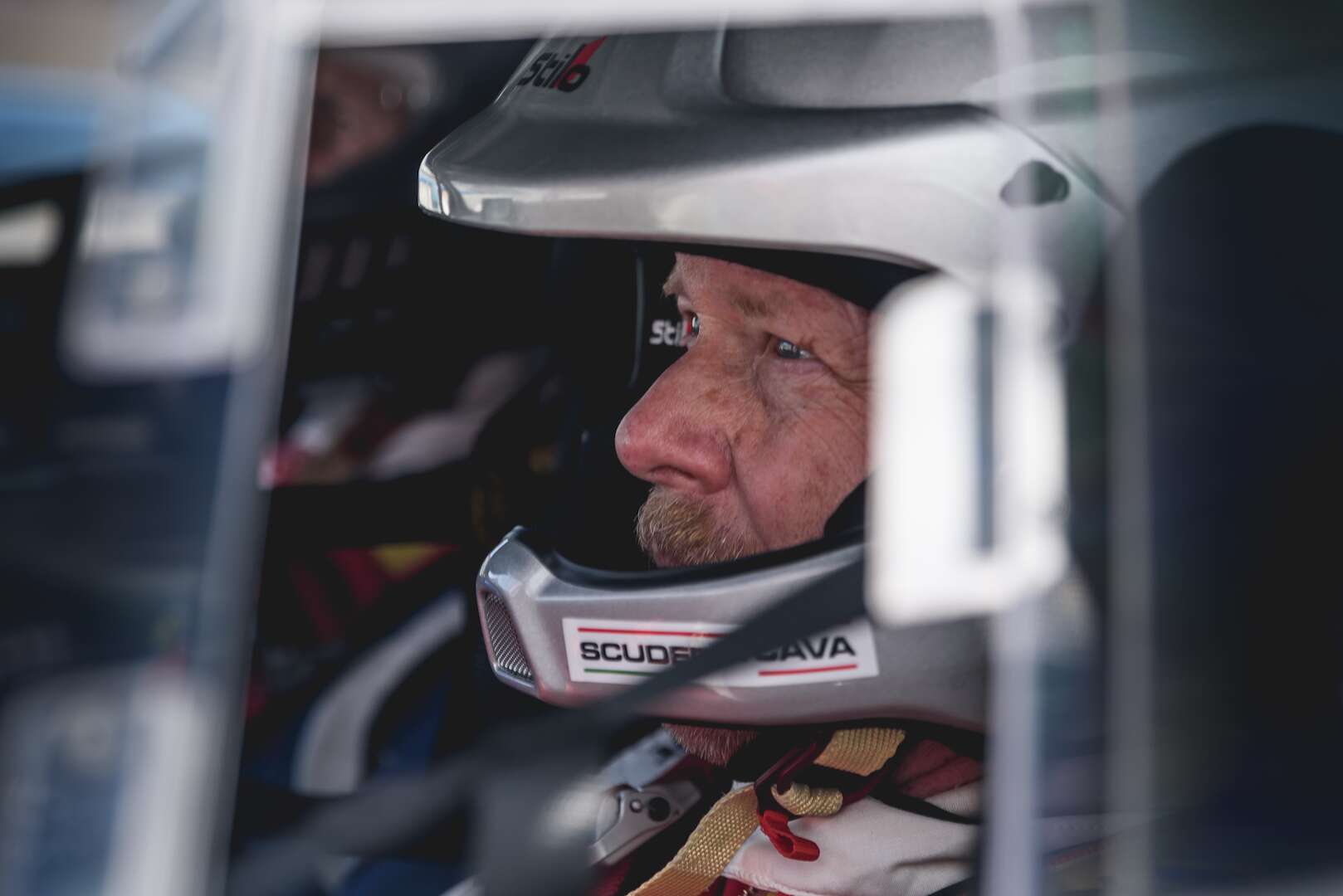 Ulrich, pinching himself over his good Ferrari fortune

Apparently, Bildman and the rest can do this: The Ferrari Challenge has been a springboard for racers who have gone on to score wins and podiums in international GT and endurance racing, including IMSA, FIA, Grand-Am, the European LeMans Series, and the 24 Hours of LeMans. Of course, as Patrick Dempsey or the late Paul Newman might affirm, it helps to be both rich and famous. Michael Fassbender, the superlative Irish-German actor known for excelling in parts from Macbeth to the X-Men’s Magneto, is driving in this year’s series. And the pressure is on when I learn that I’ll be driving Fassbender’s car over our long practice sessions. We’re sharing a coach as well in Craig Stanton, who’s won in everything from motocross racing to a Grand-Am Rolex championship.

Stanton is an ideal coach for me—enthusiastic, encouraging, detail-oriented—and he quickly has me refining my braking transitions and slicing seconds off my laps. He’s a racing-suited Jack LaLanne, huge on nutrition and the mental/spiritual side of racing, who once set a goal of being America’s fittest driver.  And this New Yorker gets a kick out of Stanton’s West Coast approach, including his zen-like correctives of my occasional shuffle-steering and other performance faults.

“Everyone has a chink in their armor that holds them back,” he tells me, soothingly. “It’s about releasing your fear.”

Releasing your driving fears with Stanton, as actor Fassbender is doing, might set you back on the order of $2,000 a day. But for a full-service, sunrise-to-sunset coach with Stanton’s resume—“I’ll pick clients up from the airport, everything,” he says—that actually seems quite fair. Stanton freely admits that the Ferrari isn’t actually the best training tool for developing drivers: It’s too powerful, too capable, a car that covers a driver’s sins like a priest in a 200-mile-per-hour confessional. But damn, are those sins fun, as long as they don’t reach mortal territory. 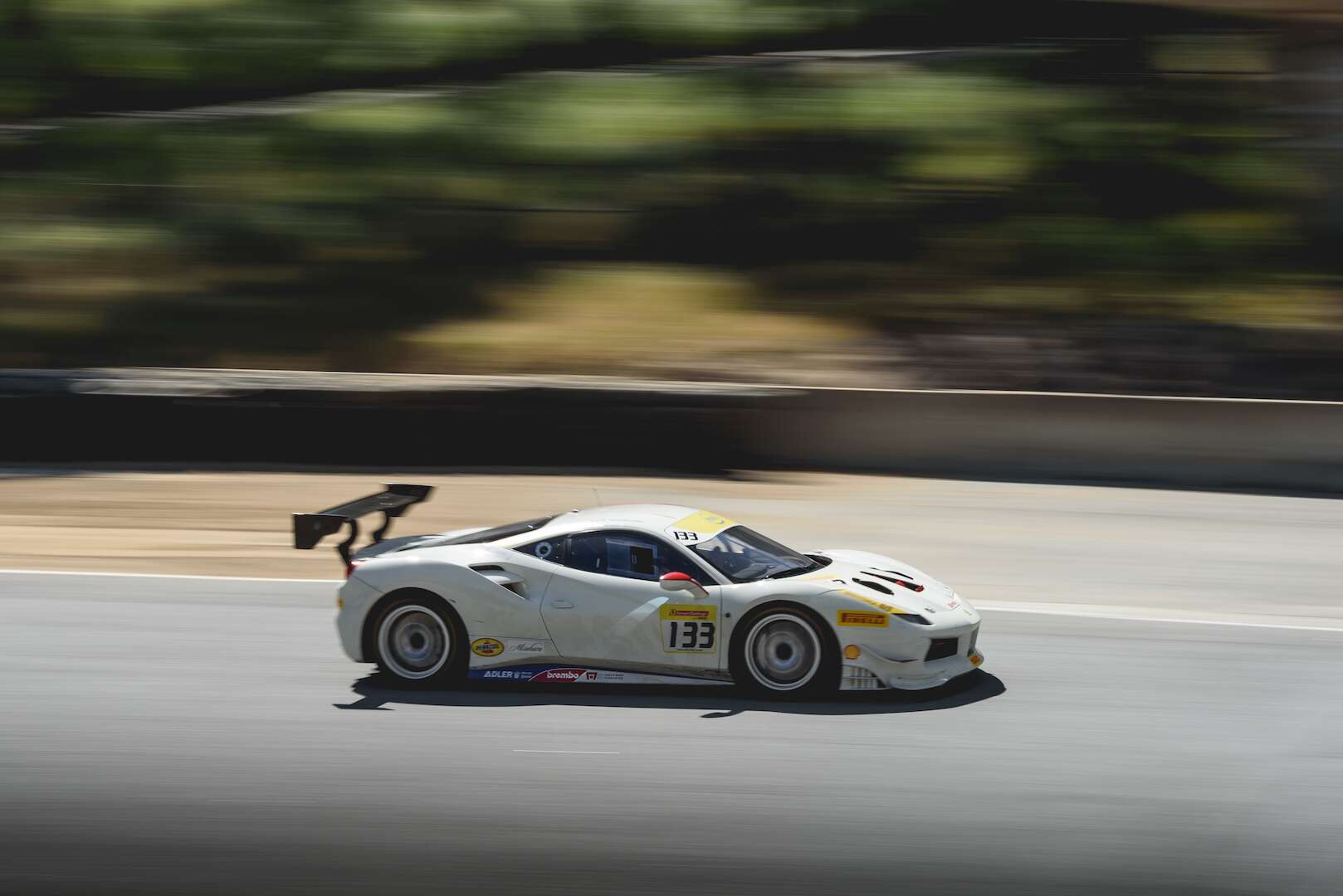 From that private coaching to spare parts to race wrecks, competitors acknowledge that racing a Ferrari from California to Watkins Glen is one expensive hobby. This year, Ferrari is experimenting with a $40,000 parts allowance for each driver in the six-race series—a trailer in the paddock offers everything from body panels to suspension bits—and it’s easy to see how quickly a driver could burn through it.

During a Laguna practice session, Bildman’s 458 Evo gets taken out by a competitor whose adrenaline clouds his judgment: The guy decides to pass Bildman on the outside of a corner, runs out of (non-existent) room, and shunts them both off the track. Yes, in practice.

“I’m a little disgruntled right now,” Bildman says when we meet in her trailer, and I watch an onboard video of her rival’s spectacularly ill-advised move. WTF was that guy thinking? In a win for justice, Bildman’s car proves repairable. But in one moment of impatience, the other driver has put himself out of commission for both weekend races: Money spent, Ferrari smashed, and he doesn’t even get to run.

In relative terms, the $330,000 488 Challenge car actually seems reasonably priced. That’s less money than the last lavishly-optioned 488 GTB I drove, a $358,000 supercar that took me to 171 mph on the long straight at Monticello Motor Club.  I won’t match that speed on Laguna’s shorter, uphill-and-over straightaway—140 mph is about it—but the racer is decisively better than the civilian 488 in terms of lateral grip, aerodynamics, braking, cooling, and of course, on-track safety. And what does one get for that $330,000? For one, a Ferrari that can circle the company’s renowned Fiorano test circuit in 1 minute, 15.5 seconds—or 4.2 seconds faster than a LaFerrari. 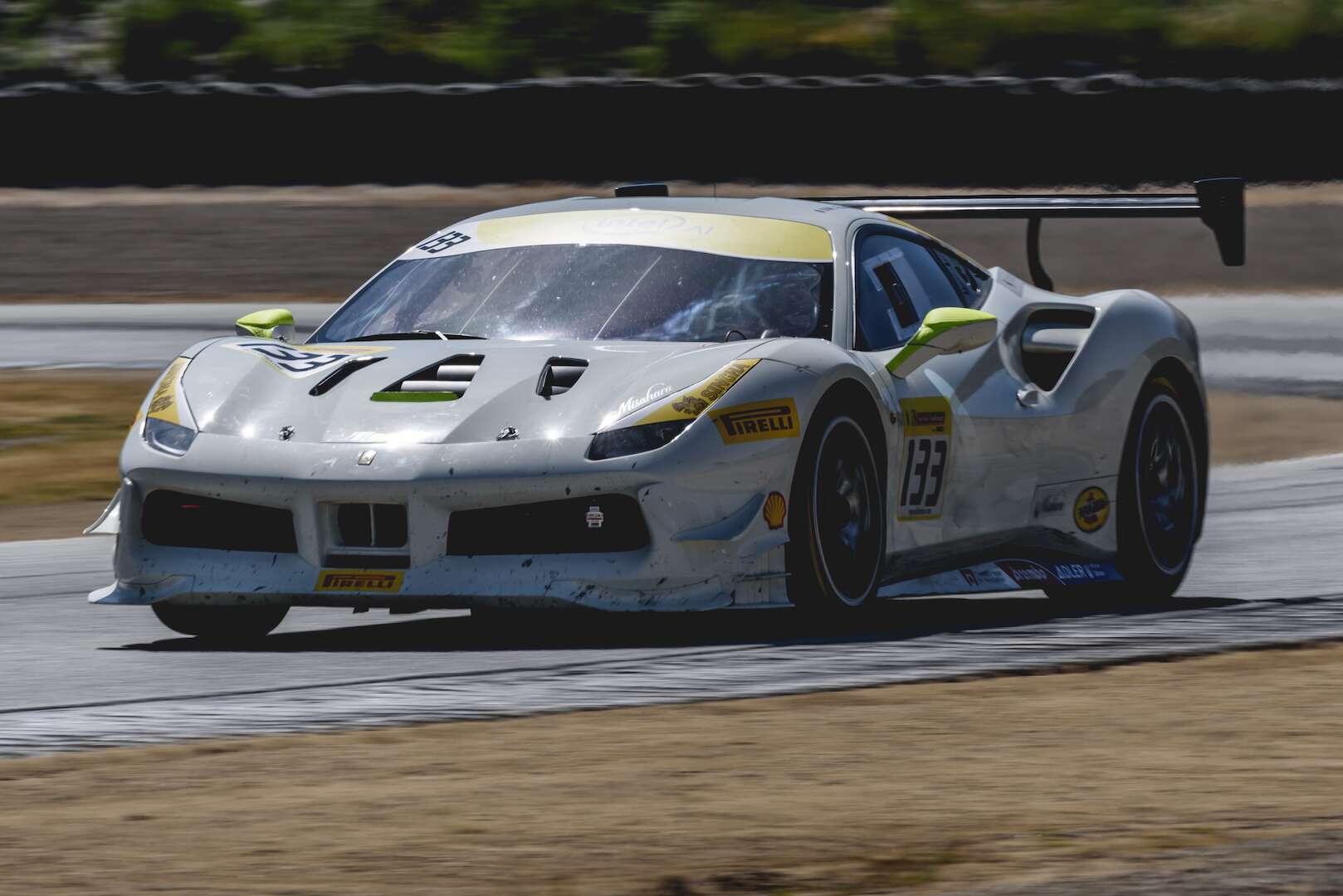 Sure, one is a slick-tired racecar, the other a street-oriented hypercar. Try this, then: Gunnar Jeannette, the wingsuit-flying, former ALMS driver’s champion—he’s coaching Lisa Clark this weekend—tells me that these Challenge cars are faster than the Ferrari 488 GT3 he’s driving in IMSA’s WeatherTech SportsCar Challenge. Those GT3 racers are hamstrung by balance of performance rules that restrict output to at least 100 fewer horses than the 661-hp Challenge cars. The Challenge cars, Jeannette swears, are also trickier to drive near their limit.

He’s right: Once I warm up my icy slicks at Laguna, on a morning track dampened by the Pacific marine layer, the Challenge car drives a lot like a 488, only dialed to 11. It’s louder, rowdier and grippier. But its sensitive steering, precise chassis and powerful carbon-ceramic brakes imbue its driver with confidence, as in any new Ferrari. 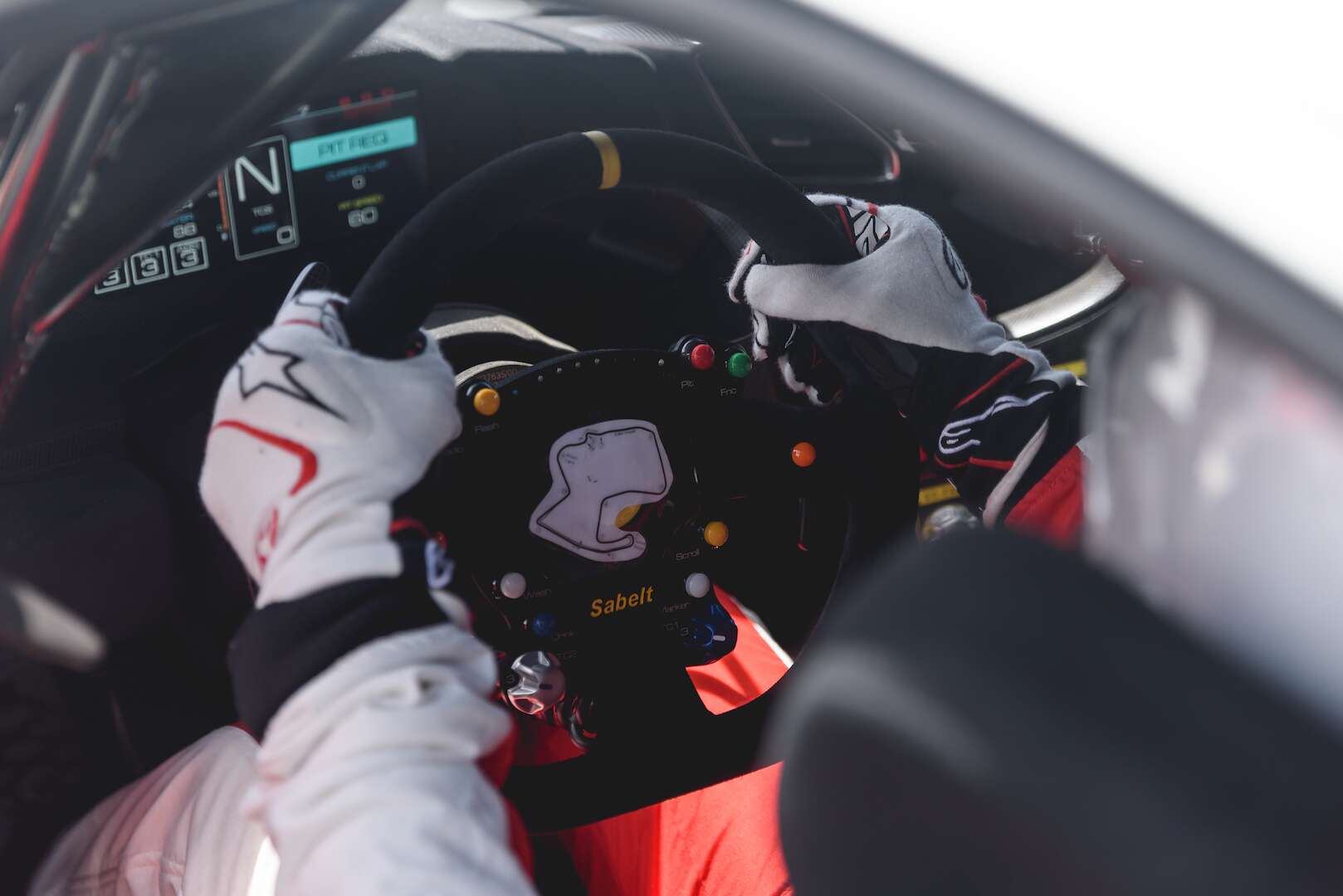 Ferrari cabin is tight but relatively simple in racecar terms

These Challenge cars do roll off the same assembly line in Maranello, Italy as showroom models. But remapped engine controls and significantly shorter gearing help deliver up to 11.6-percent more acceleration out of the corners corners compared with the old 458 Challenge Evo. (That short gearing proves a motorcycle-style hoot on track: Running from a standstill to maximum revs in fourth gear takes just six seconds flat.) Ferrari engineers also trimmed 43 pounds from the engine and nearly 19 pounds from the exhaust system. The company’s Side Slip Angle Control software is new for a Challenge car. But instead of the single, mode-setting steering-wheel manettino switch on street Ferraris, there are two: Based on available tire grip, the TC1 and TC2 levers govern both the onset of traction-control intervention and the intensity of said intervention. 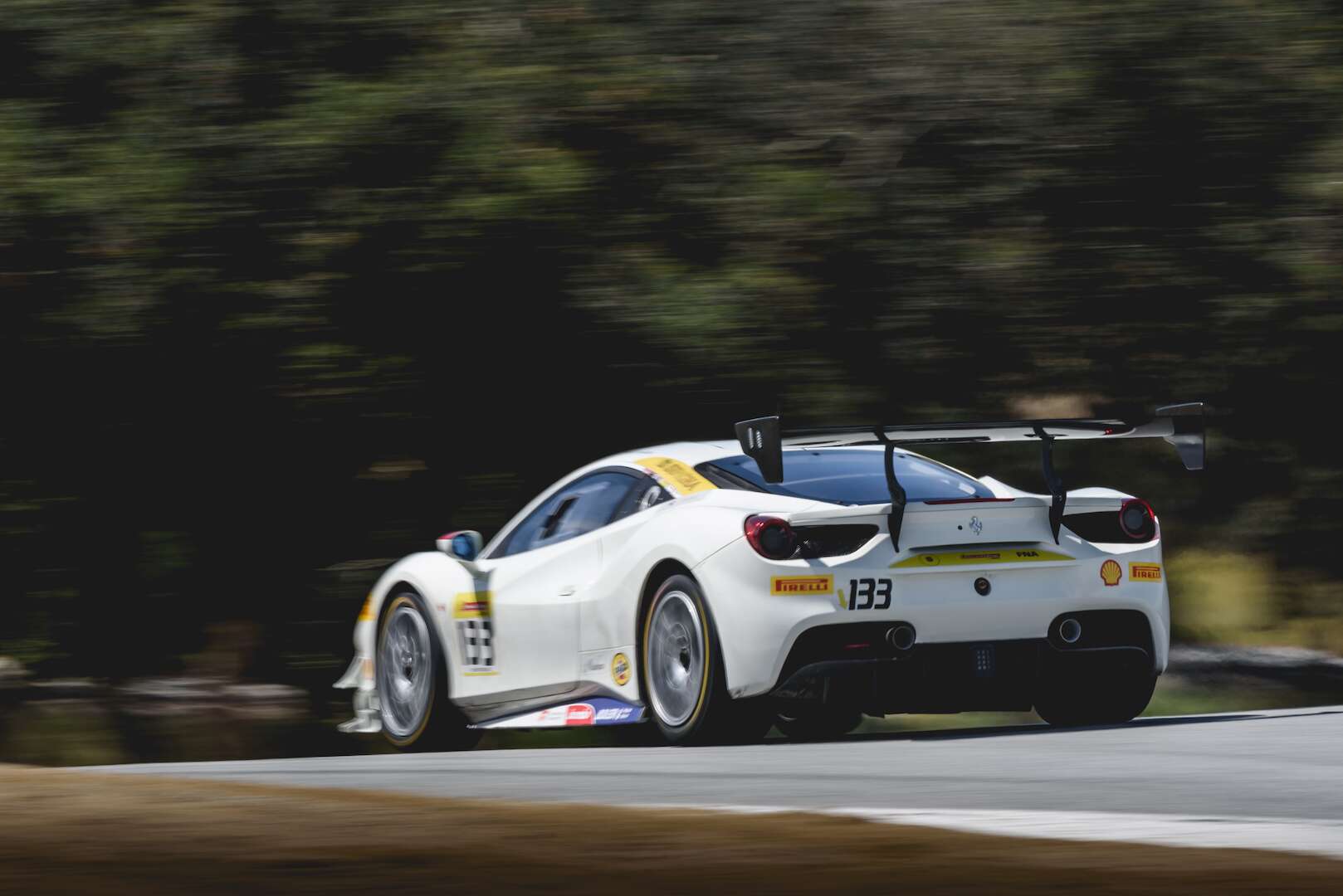 488 looks hot, even with a surfboard-sized wing on the back

Aerodynamics are the most obvious visual change, including the soaring wing, similar to that of the 488 GTE that won the 2016 FIA World Endurance Championship. Front radiators are raked toward the rear to improve airflow and reduce drag, and a redesigned front bumper gets a hyper-aggressive splitter and flicks; new intakes on rear flanks direct cool air to the brakes.

Girded with this embarrassment of engineering riches, I prepare for my final practice session. I’m wishing that I could test my mettle during the actual races, which bring a series-record 57 Ferraris to the circuit. But I don’t have my own car—only the white-bodied Prancing Horse that a certain Oscar-nominated thespian will be racing this weekend. 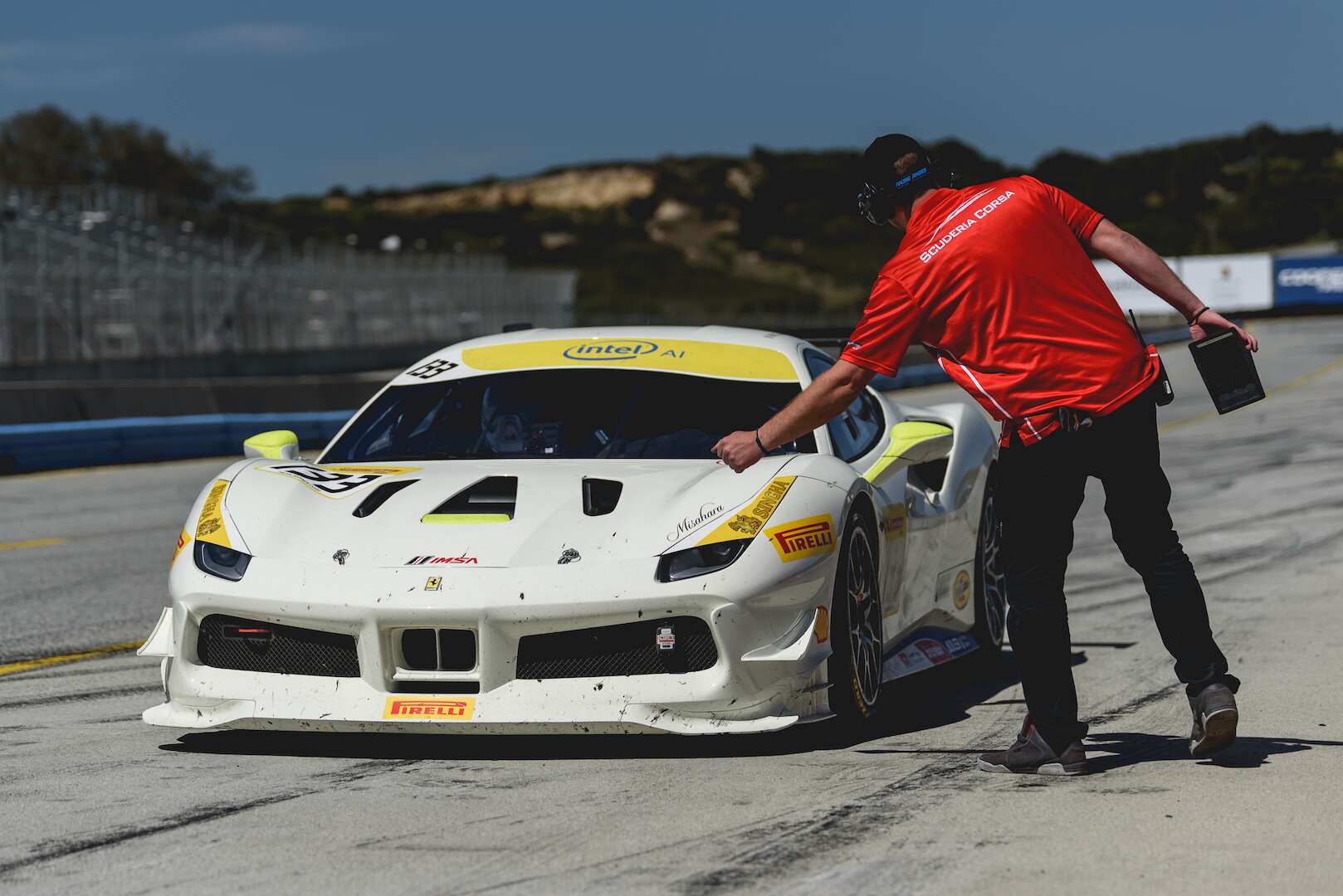 Fassbender pulls the #133 car into pit lane and hops out, where he’s met by a video crew from The Hollywood Reporter. They’re here to shoot a feature on Fassbender, who grew up idolizing Ferrari’s Michael Schumacher, and who’s largely skipped a year of acting to compete in the series. (If Fassbender can move the metal in real life the way he does as Magneto, he’ll do just fine in the Challenge, where he’s already secured a class win and some podium finishes). For two days, I’ve been half-expecting Fassbender to pull celebrity rank and get me booted from his race car. Instead, he’s unerringly chill and gracious—and clearly as thrilled as any of us to be driving such a mega-powered car on track.

“I’ll try not to break your car,” I tell Fassbender with a wink, as I take his place in the driver’s seat. I wish him well in the weekend’s races.

“It’s a treat, isn’t it?” Fassbender says, fixing me with that movie-star grin. “Cheers, bro, good luck!” he says.

Catching a final glimpse of the actor as I roar out of the pits, surrounded by cameras, it occurs to me that I’ll never, ever be as cool as that dude. But it’s okay: I’m still driving his Ferrari.