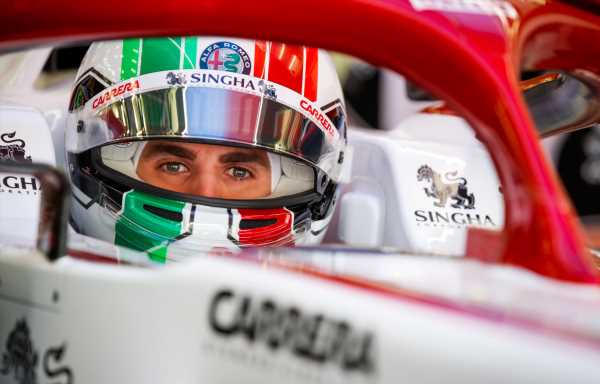 Antonio Giovinazzi says his nation’s triumph at Euro 2020 is making him particularly excited for the British Grand Prix.

Giovinazzi is the only Italian driver on the grid and saw his country win the Euros at Wembley after beating England in a penalty shoot-out.

Heading to Silverstone, he’ll be hoping to emulate his compatriots by also enjoying some success on British soil, and their victory is making him that bit more excited for the race weekend.

He’s hoping it will help him turn things around after a difficult past few rounds.

“I am excited to get back to racing, especially with the enthusiasm from the celebrations of Italy’s European Championship victory still fresh in my mind,” he said in the Alfa Romeo preview.

“I hope some of this shine can rub on me this weekend and we can deliver a more successful weekend than the last two races, when we were effectively out of contention on the first lap without fault.

“We know we can be competitive and fight against any of our direct rivals when things don’t go against us, so let’s make sure this weekend is when we get it right.”

The upcoming race weekend at Silverstone will be like no other, with sprint qualifying – a 100km Saturday race to determine the order for the main event – being tried out.

Some are excited about it whilst others would rather not have it take place, but Giovinazzi’s team-mate, Kimi Raikkonen, is reserving his judgement until afterwards and thinks everyone should do the same.

“The new format will be interesting,” said the Finn.

“I don’t feel we are in a position to judge it yet, let’s see what this weekend brings and then we can make our mind up about it with more knowledge.

“Most importantly, no matter how the weekend looks like, we need to make sure we’re competitive from the beginning: things start to matter on Friday and we need to be right in the battle for the top ten from the start if we want to be there at the end of the day on Sunday.”

The duo’s team is set to stay in Formula 1 for years to come, with a deal being reached with Sauber, confirming a new multi-year partnership between the two parties.