Renault’s Formula 1 rivals Force India and Haas are frustrated by the leniency of the five-second track limit penalty that Carlos Sainz got in the United States Grand Prix.

Sainz started 11th and ran wide exiting Turn 1, but went on to finish sixth ahead of the Force India and Haas drivers.

The Spaniard served his penalty during his pitstop on lap 24 of 56, but it did not cost him any positions.

Haas boss Gunther Steiner complained that it took took too long for the stewards to react.

“Our team manager will bring it to the Sporting Working Group,” Steiner said.

“You cut the corner, take an advantage, and then it takes five laps to realise that somebody did something, it takes another five laps [to react] – and you are gone by then because everybody’s stuck.

“Then they give you five-seconds, which means nothing, because you’re gone. It’s wrong.

“They need to say that if they catch you after five or 10 laps, you need to go back to your original position, and lose the positions, or give a bigger penalty.

“Otherwise if you’re clever enough, and some people are clever enough to play this as a strategy, just cut it knowing that you get five seconds, and try to drag it out.

“Because on the first lap there are so many incidents, and the stewards deal with the incidents on importance. For sure the front [of the field] is more important.

“If you would replay this race and Sainz was put back in the position where he started, the race would have developed completely differently.

“I think nobody thinks about this because nobody really cares, but we should care.” 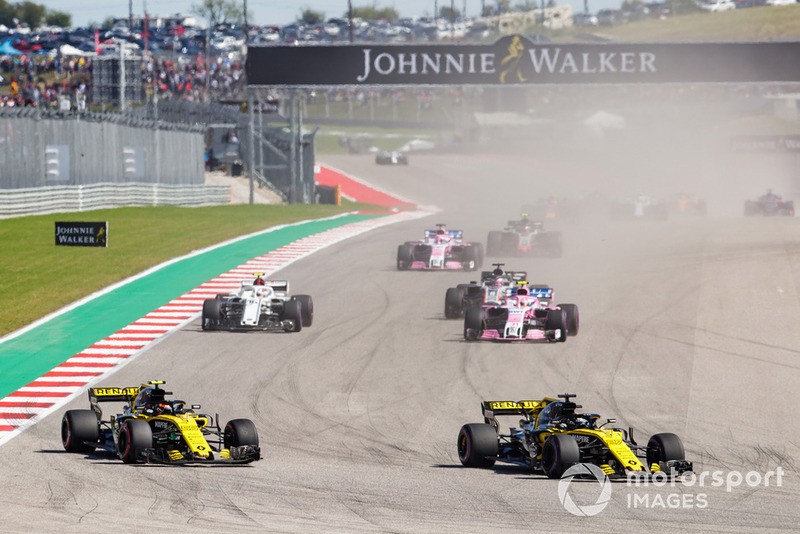 “Sainz ran wide and gained an advantage,” said Szafnauer. “He braked really late, and the fact that he went off the track to overtake everybody, and he got a five-second penalty, isn’t really commensurate with what he did.

“And it’s not in line with the regulations. It should have been a stop and go or 10 seconds if he doesn’t give the place back.”

He added: “When you have the sort of situation you had in Abu Dhabi last year, where Nico Hulkenberg overtook, knowing that a five-second penalty would be the likely penalty.

“He easily gained more than five seconds so it was worthwhile doing – that’s why we’ve issued a new set of guidelines to the stewards.

“The teams are aware of it, where if we think it’s being done deliberately, they will take a wholly different view.

“But on the first corner of the first lap it was a bit of a muddle up there, and it was quite clear that he went up the outside of [Charles] Leclerc, and then went around and went very wide.

“It looks as if he followed Sebastian [Vettel] a little bit, and then he came back on and was in front. I think you have to say he gained an advantage by doing that.

“But as far as the penalty is concerned, I think it’s the standard penalty.

“It wasn’t something where he did it deliberately thinking I’ll do this on purpose to be able to open up a gap.”