Williams is working on signing Esteban Ocon for next season but it depends on the Formula 1 team raising the necessary budget.

Ocon is expected to leave the Racing Point Force India team at the end of the year, with Sergio Perez’s stay confirmed and Lance Stroll expected to join from Williams given his father Lawrence is now a Force India investor.

Formula 2 championship leader George Russell was announced as a Williams driver last week, while fellow Mercedes protege Ocon has targeted the British team as his last chance to remain on the F1 grid.

Williams is known to be keen on Ocon, but the team must consider its financial situation given it is losing title sponsor Martini at the end of the year and has benefitted this year by fielding the well-backed duo of Stroll and Sergey Sirotkin.

Though that has helped secure its short-term financial health, Williams has struggled with an uncompetitive car and is last in the constructors’ championship.

Signing Russell, a move which has not been done via any Mercedes commercial support, is considered a significant statement of intent from Williams that it wants to put its competitive prospects above its financial needs.

This is also why Ocon remains an attractive proposition despite not bringing any backing.

However, after signing Russell, the team cannot afford to bring in Ocon without securing the necessary funding.

Motorsport.com understands that Williams hopes to raise the budget to cover the second seat independently, which would give it freedom to choose the second driver purely on preference.

Ocon said on Thursday ahead of the United States Grand Prix that he was happy for Russell and does not think his chances of joining Williams are dead.

“It was good to see that George is promoted,” he said.

“He’s also part of the Mercedes junior programme, and he’s signed for multiple years, and that was not our intention to sign for that many years.

“There’s still a second seat at Williams, there’s still talks, so we’ll see where that goes. Congratulations to George. He’s in a different way in his career than I am.

“He was not at all stealing my spot, that was not the way it happened.”

Ocon is not the only driver in contention for the second Williams seat, with the shortlist believed to contain a couple of other drivers in the F1 paddock already and possibly one or two outside it.

Sirotkin is vying to remain in F1 but that depends on whether the team is happy to continue with the rookie and on his backer SMP Racing being willing to risk funding another year with a back-of-the-grid car.

Reserve driver Robert Kubica could also be a contender and has made a fresh push to secure a bigger budget for 2019. 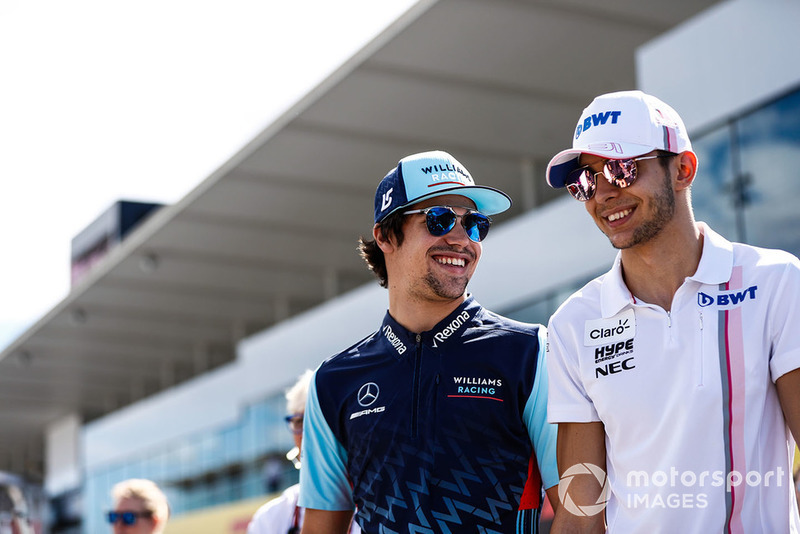