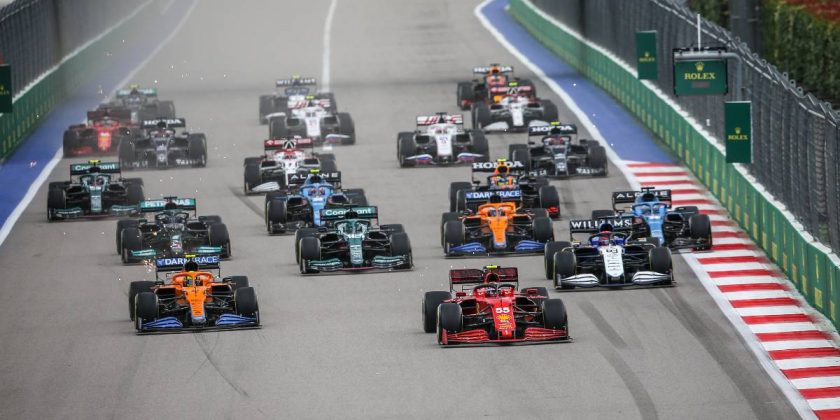 The Belgian Grand Prix weekend in late August was completed without a racing lap having taken place due to heavy rain, which also affected qualifying.

There were also concerns for the Russian Grand Prix, which was hit by a downpour in the closing laps after FP3 had been cancelled by a thunderstorm the previous day. Against all expectations, however, qualifying was able to take place as scheduled.

Another complication is the races in junior categories that take place over a grand prix weekend, potentially limiting the flexibility to move F1 action to different times when the weather looks more favourable. This is because they are under different governance to Formula 1.

A factor that also has to be taken into account is TV scheduling, but the FIA race director insisted that is not the overriding concern in terms of adjusting a race programme.

Asked whether F1 race start times could be altered or were too TV-dependent, Masi told The Race: “Not so much TV schedule dependent…I think it’s something we will be discussing in the coming weeks.

“We said following Spa there’s obviously a whole lot of strategic discussions that need to take place between the FIA, F1 and the 10 teams, and that will be one of the discussions at the Strategy Group meeting.

“It’s not just a ‘pluck it out’ scenario – we’re talking about two completely separate governance structures between the three championships [F1 and F2/F3].”

At Sochi, the decision was taken to bring forward the opening Formula 3 race of the weekend to the Friday evening due to Saturday’s dreadful forecast, and it resulted in Dennis Hauger securing the title before he had been expected to have the chance to do so.

Asked whether the decisions to bring forward that F3 race and adjust the Saturday programme accordingly represented a new, more proactive approach due to what had happened at Spa a month earlier, Masi said: “No, not at all.

“Let’s look at Saturday for what it was. If you look at earlier in the day, those that were present at the time saw there was a window that actually looked okay, which is why we brought the F2 cars into the pit lane. And then obviously that diminished.

“And we’ve always run by principle on those types of scenarios to go session by session, which is what we did. Obviously, there were limiting factors.

“With regards to the F3 race being moved to Friday, obviously the conditions looked as they did. Probably the overriding factor in that scenario was that it was the last round of the championship and we had the ability to fit it into the programme.

“So you’ve got to take all of those factors into account but no, Spa certainly didn’t come into it whatsoever.”