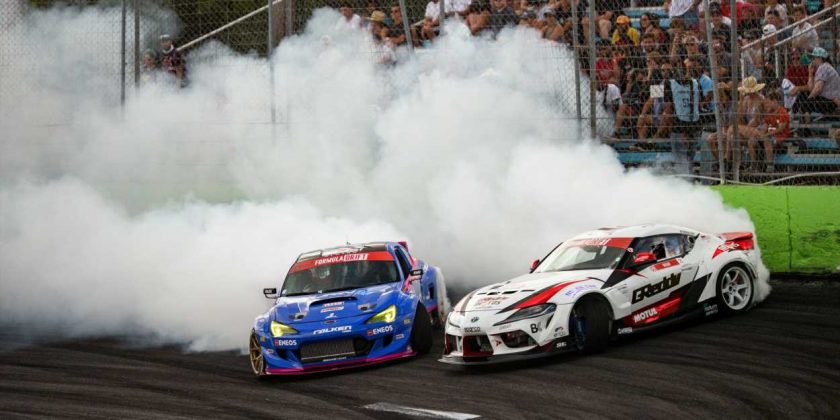 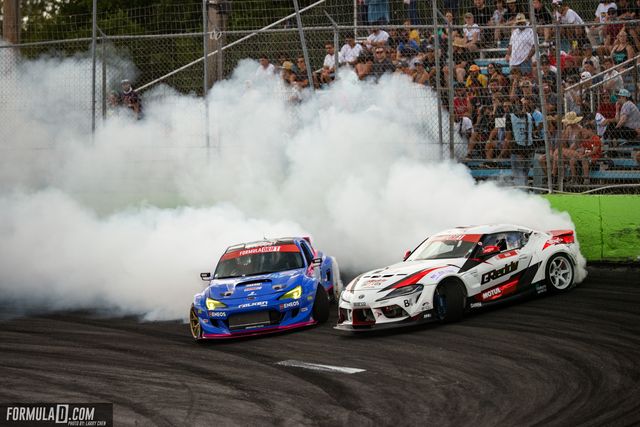 Different motorsports sanctioning bodies have different approaches to broadcasting their events. IndyCar just reupped with NBC Sports for the next few years, NHRA is on Fox Sports or FS1, IMSA is on NBC, NBCSN or CNBC, and F1 is on ESPN or ESPN2 or ESPNU or ESPNews and ESPN Deportes.

Check your local listings, as they say.

Formula Drift is much smaller than those other sanctioning bodies, so you can watch it on other media outlets. Formula D is available to its highly-connected fanbase through the internet: Facebook, Instagram and Twitter provide links to the livestream, which is available on YouTube. The sport has had network broadcasts before in the course of its 18-year history, and it has had livestreaming, too. For Formula Drift management, the livestreaming gives them more control and more information. 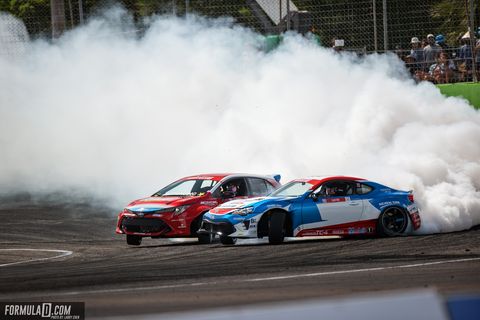 Formula Drift co-founder and president Jim Liaw was recently addressing the SEMA Young Executives Network on Facebook and was happy to field questions about how best to get the Formula D excitement to the most viewers.

“Live stream gives Formula Drift control, information and also accessibility to our core audience of 16-34 year olds,” said Liaw. “(These fans) do not subscribe to cable, they are either cord-cutters or have never been connected the cord… The FD livestream received more than 40 million views last year, giving us great access to our audience, with tremendous exposure for the teams and sponsors.”

FormulaD fans are among the most social-media savvy in the world, and don’t necessarily watch network TV.

“There was a question about, ‘Have we thought about national broadcasting? Will Formula Drift be seen on networks like ESPN?’ In terms of national TV, we’ve been on ESPN2, we’ve been on SPEED before it became Velocity, we’ve been on CBS Sports. To be frank, the cost of doing a live-to-air broadcast is expensive. Cable networks are not coming to us and offering that time to us. We have to buy the time.”

And that time ain’t cheap. Plus, the day’s competition doesn’t always go as smoothly as you’d like on live TV.

“The nature of drifting is more like drag racing, there can only be two cars on track. If there’s a wreck, it slows down the pace. We can’t have a predictable, three-hour, 100-lap race that we know when you can start airing, when you’ll get to the end. That makes it a little bit problematic.” 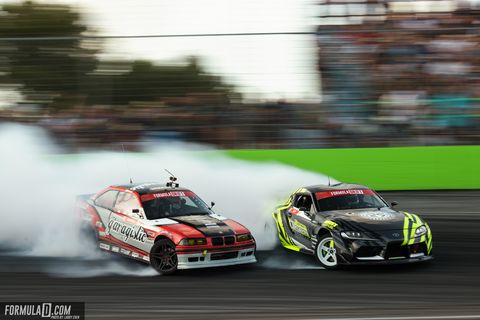 “What we’ve been able to embrace and adapt to is digital content, whether it’s long-form or short-form, whether it’s Instagram reels or YouTube recap videos and content pieces and things like that, those have all done really well for us. But I think one of our main pillars is our livestream. We were one of the first to livestream our weekend event and it did so well we were crashing websites and servers. As a result, we really shifted and put a lot of our investment effort into the live stream.”

They do it so well it might be all they need.

“To the question, ‘When will we see Formula Drift on a national broadcast?’ my response is, ‘Do we necessarily need it? And what is the benefit or the results from that?”

And it’s here that Formula Drift’s approach should be looked at by other motorsports, maybe even other sports in general, because of the benefits their approach offers.

“In this transitional phase from a lot of traditional media to a lot of new digital media, and maybe coming back to the middle finding that balance between the two, a lot of times when we face our decision makers and marketers, they don’t understand the difference,” said Liaw. “If I said, ‘We had a million viewers on our TV broadcast and it was Nielsen-rated,’ do these decision makers really understand what that means, in comparison to, ‘I livestreamed to a million unique viewers?”

It’s a matter of knowing your viewers, and Liaw thinks Formula Drift knows its livestream viewers much better and can therefore give advertisers and sponsors a better return on their investments.

“A Nielsen rating is a sample survey of somewhere between 500 and 1,000 households, and they basically multiplied by, you know, the, the national population and, and then they multiply by some factor whatever like 2.2, or four people, or whatever per household or something to that effect. I could be completely… I’m not completely accurate, but it’s generally that concept.” 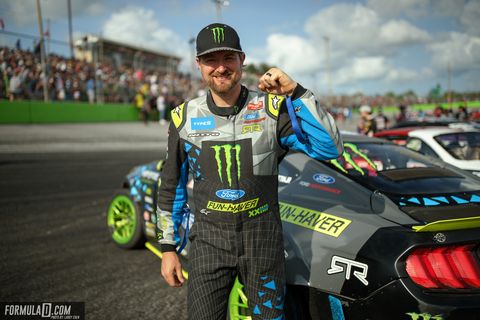 Actually, Nielsen ratings are calculated based on a sample of 40,000 homes and about 100,000 people that’s demographically representative of the population as a whole, according to a recent story in The Hollywood Reporter. From there it’s broken down to ratings, share, total viewers, overnight metered ratings and seven or eight more metrics. But Liaw is certain his viewership is better-defined.

“So, when I say one million viewers on a TV show, how accurate is that? Do I know who they are? Do I know where they’re watching from? Do I know how long they’ve been watching? I sort of don’t, but it sounds good, right? It sounds good that we’re on ESPN2 and that we got a million viewers. But in comparison to what we are doing now is when we broadcast and whether we get 500,000 unique viewers or a million unique viewers through a digital platform, through livestream, through YouTube, Facebook, etc., we have the power of analytics. I can come back to any partner of ours, to our teams and say, ‘Look, this particular event has 700,000 unique viewers and they watch for this amount of time, they were based here, there, we can demographically profile them in terms of age group, things like that.’ So there’s more accuracy in one versus the other.”

Liaw wants to get the word out on that.

“I think there needs to be more decision makers who understand the value of that, because I think if they can see the value, or even the density and the strength of the audience that we provide, not saying one is better than the other, but they’re very different in what they serve, how they serve it and how effective they can be.”

Formula D is not on every social or gaming platform, they’re not active on Twitch, Snapchat or TikTok, for instance, though they are looking into those.

“Our current primary platforms that we broadcast on are our YouTube channel, our Facebook channel and our Instagram channel, as well as on our own website, that’s for the live stream. Obviously, our digital content lives on Instagram, on Facebook, on YouTube, in both long-form and short-form, those are our strengths, our pillar. We’ve also gone away from jumping on everything. ‘Oh, Snapchat came out, so we need to be on Snapchat; Tiktok came out, we need to be on Tick tock. Before doing well on Twitch, so we need to be on Twitch.’ I think we need to focus. What we learned recently, over the last few seasons, has been that we really need to focus on certain strengths. And building those out there before trying to jump on every new thing.”

The approach has worked, through lean times after the 2008-2009 recession, for instance, and it kept FormulaD going through the Pandemic, when they were able to maintain a schedule when not every entertainment outlet was. And it will stay with them for the foreseeable future. It offers a more intimate connection with fans who are generally among the most technologically savvy fans in motorsports. But if NBC, CBS or ESPN called and threw piles of money at them, they’d probably take it, and give more precision demographics in return.