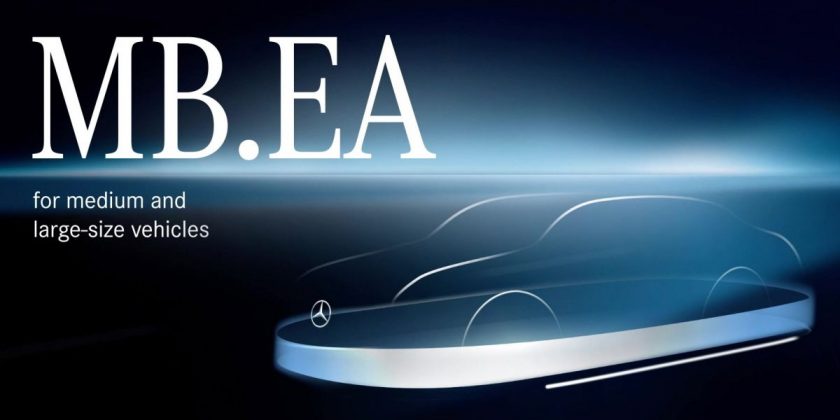 Mercedes-Benz will launch three dedicated all-electric platforms from 2025 as part of its latest strategy update, which will see the company lay the groundwork to go 100% electric by the end of the decade.

Put simply, the German automaker is choosing to accelerate from EV-first to EV-only as quickly as it can, rather than waiting for an external stimulant. This is to ensure that when the time comes and market conditions are right, it has a comprehensive portfolio of EVs ready to go.

Before focusing on what’s up ahead, let’s talk about the current. In today’s world, Mercedes-Benz’s MRA (Modular Rear-wheel-drive Architecture) and MFA (Modular Front Architecture) platforms are used for several of the company’s models, with cars like GLA, GLB and GLC being examples. These platforms are flexible, as they can not only accept traditional internal combustion engines (ICE), but also plug-in hybrid and fully electric systems.

The latter is seen with electric derivatives like the EQA, EQB and EQC, which gives customers options when it comes to powertrain types. This year, the EQS debuted the automaker’s first dedicated electric platform – EVA (Electric Vehicle Architecture) – which will also be used for the EQE, EQE SUV and EQS SUV. The EVA is dedicated to large vehicles, but for compact and medium size models, there will be another dedicated EV platform – MMA (Mercedes-Benz Modular Architecture) – that will arrive in 2024. The MMA will debut an in-house developed and built electric motor called eATS 2.0, which is the follow-up to the eATS used in the EQS. On the EQS 450+, the rear eATS serves up 333 PS (329 hp or 245 kW) and 568 Nm of torque, and runs on a 400-volt architecture.

Mercedes-Benz says eATS 2.0 will be a radial permanent magnet motor that is part of an 800-volt powertrain with a silicon carbide inverter. This will be used for the majority of its key products, which likely includes those based on the three new platforms mentioned at the start.

Current situation explained, let’s talk about the future. The trio of new platforms from Mercedes-Benz includes MB.EA (Mercedes-Benz Electric Architecture), which will cover all medium to large size vehicles in the passenger car line-up, and over time, it will effectively replace the MRA as well as EVA. The MB.EA will accompany the MMA that arrives earlier, with the latter being the replacement for the MFA that underpins compact and medium vehicles.

With these two platforms – MB.EA and MMA – Mercedes-Benz will give up on new ICE variants entirely, which is keeping in line with its 100% electric commitment. This will also affect all three sub-brands under Mercedes-Benz, namely AMG, Maybach and G (short for G-Class), which will also become fully electric. For Maybach, the automaker says we can look forward to an even more luxurious version of the upcoming EQS SUV – there’s even a teaser to go along with the statement. Meanwhile, in 2024, there will be an EV version of the G-Class (reportedly called the EQG), which pretty much confirms the existing model will be converted to pure electric drive, given the new platforms are only due from 2025.

As for AMG, it will get its own electric platform, creatively called AMG.EA, which will be used for a range of performance EVs. This is one of the three platforms in development, but unlike the MB.EA, the AMG.EA will get its own power units that better reflect the AMG philosophy.

For this, Mercedes-Benz announced that it has acquired British company Yasa, giving it access to axial flux e-motor technology. These motors are described as being vastly superior in terms of power to weight, while providing outstanding efficiency and endlessly repeatable performance.

Aside from passenger and performance cars, Mercedes-Benz also has a business in vans and light commercial vehicles. For these categories of vehicles, there’s the VAN.EA platform, which is said to “contribute to emission-free transportation and cities in the future.”

With EVs, proper software is just as important as the hardware, so the automaker is working on the new MB.OS (Mercedes-Benz Operating System) for launch in 2024. This will act as the central brain of its future EVs, handling MBUX (Mercedes-Benz User Experience), cloud systems, autonomous driving functions, drive and charging systems and comfort functions, among others.

Similarly, batteries play an important role to ensure that EVs perform appropriately, and Mercedes-Benz is looking to improve the technology by increasing the range provided by roughly 25%. Today, the EQS’ lithium-ion batteries use NMC811 cells that are capable of an energy density of more than 550 Wh/l, which enables for an installed energy capacity of 111 kWh in total.

For the next generation of batteries, the company will work with its partners to vary the chemistries within the battery to provide the best solution depending on requirements. For example, Mercedes-Benz is working with Sila Nano on using silicon-carbon composite in the anode to increase energy density up to 900 Wh/l.

The automaker is also looking into solid-state chemistry, which is often considered a disruptive technology in the battery world. Solid-state batteries have the potential to push the energy density beyond the limits of conventional lithium-ion cells up to 1,200 Wh/l and more than 400 Wh/kg. This not only doubles the energy capacity, it also reduces the weight in the same packaging size, while being able to endure more charging cycles over the battery’s lifetime.

Mercedes-Benz will also look to standardise its batteries and is aiming for more than 90% of all future vehicles to be based on a common battery platform. However, there will be some flexibility in place to offer individual solutions to its customers, depending on the application.

“We are aiming for a modular battery system that consists of uniformly designed components and a standardised interface to the entire vehicle. Only two differentiating characteristics will create the necessary variance in terms of range, charging and driving performance: cell chemistry and the height,” said Markus Schäfer, Mercedes-Benz’s COO and R&D chief. The battery strategy will also require Mercedes-Benz to secure a capacity of more than 200 GWh, and to do that, it will set up eight new gigafactories together with its partners around the world. One of the eight will be located in the United States to supply its Tuscaloosa and Charleston plants, while four more will be set up in Europe, with the remainder set to be announced later on.

To make sure customers have access to chargers to keep those batteries topped up, the automaker is widening the coverage provided by its Mercedes me Charge platform. In the US, it partnered with ChargePoint for access to almost 60,000 public chargers, with 60,000 more semi-public chargers to be set up in shopping malls, hotels and workplaces.

Another partnership with Shell will see the Shell Recharge network be available to Mercedes-Benz customers, with over 30,000 charge points due by 2025 in Europe, China and North America. Along with Ionity and other partners, Mercedes-Benz EVs can charge up at more than 530,000 AC and DC charging points worldwide, all with a single Mercedes me account.