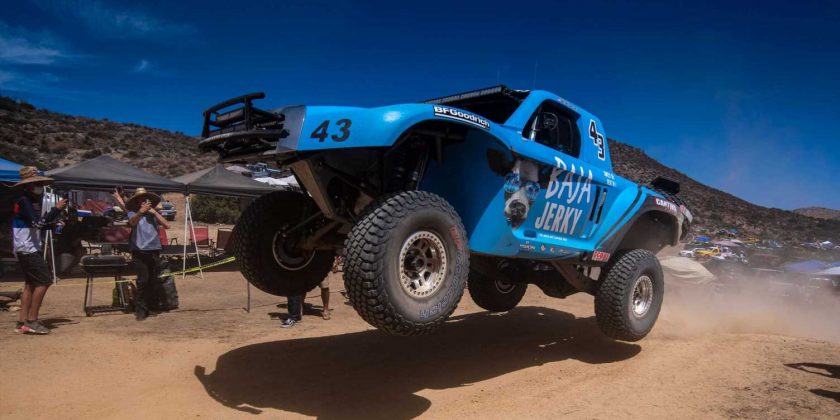 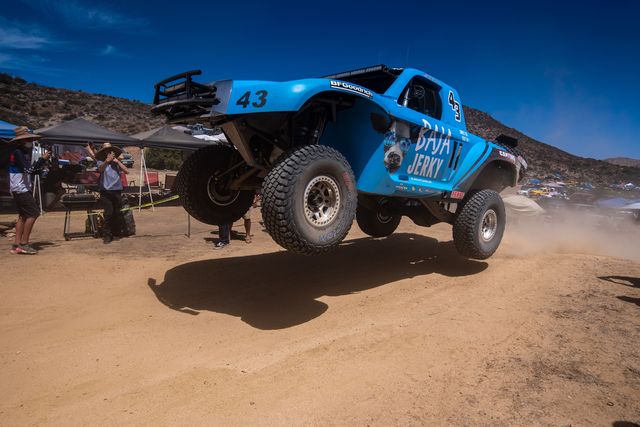 There’s a famous quote by American playwright David Mamet that says, “Old age and treachery will always beat youth and exuberance.” While that’s often true, there was no treachery involved in Larry Roeseler’s win in last weekend’s Baja 500. Instead, Roeseler used almost 50 years of racing experience and a remarkable, total, lack of flat tires.

“My very first SCORE Baja 500 was in 1972—I rode a 175cc motorcycle,” said Roeseler at the finish line. “And here I am, over 40 years later and still hitting it. This is a very, very awesome finish and we’re really, really happy.”

Roeseler drove his Baja Jerky Cantina Racing Toyota Tundra built by ID Designs to a third-place overall finish in the elapsed-time race. He completed the grueling 466.00-mile desert duel in a winning time of 10 hours, 16 minutes and two seconds with an average speed of 45.39 miles per hour. At that point, he was happy just to have finished in an apparent third place in the BFGoodrich Tires SCORE Baja 500.

He was only third for a few days, though. It was later that the rest of the story came out.

First across the finish line Saturday night was multiple race winner and scion to the reigning McMillin family of desert racers, Luke McMillin. Evidence suggested that Luke McMillin had taken a line that was not exactly on the race course. Race-dezert.com said that there were people camped out on race day in a spot that had been empty during pre-running, McMillin had to get around them and in doing so drove through their poorly placed campsite. The move, whether his fault or the campers, was grounds for SCORE to disqualify him.

“I made a big mistake and I’m very sorry,” McMillin said. “The last thing in the world I want is for anyone to be hurt at a race (no one was). I will accept any decision SCORE makes.”

Crossing the finish line four seconds later on elapsed time (four seconds after 466 miles!) was Luke’s cousin Andy McMillin. But reports were—and video backed it up—that Andy McMillin had made an unsafe pass in a restricted area of the course, actually veering into an oncoming lane of traffic that required oncoming vehicles to swerve to avoid a collision. One report said Andy McMillin made contact with a vehicle. As a result he was assessed a 30-minute penalty and officially classified in second place.

“I feel very bad if I endangered anyone during this maneuver,” said Andy McMillin. “I want SCORE Baja racing to continue for generations to come and unfortunately, I made a poor decision in the heat of the battle in the latter part of the race. These things happen, we must learn from our mistakes and move forward.”

It was an unfortunate day for two McMillins (except cousin #3 Daniel McMillin, who finished fourth), but a good day for Roeseler.

SCORE points out that the victory is Roeseler’s 12th overall in the 500 and his 18th class win there. He earned his first class win in the SCORE Baja 500 in 1972 and his first overall in 1975 riding with the late Bruce Ogilvie on a Harley-Davison motorcycle.

Yes, Roeseler is versatile. Like John Surtees in F1, he has won on both two wheels and four. Nine of his overall wins in the 500 were on motorcycles, two were in unlimited Class 1 open-wheel desert race cars and this was his first in the marquee SCORE Trophy Truck division for 950 hp unlimited trucks.

He has also now earned four career SCORE Trophy Truck race wins. His last SCORE Trophy Truck overall was in the 2008 SCORE Baja 1000, run the length of the peninsula from Ensenada to La Paz when he was the second driver for Roger Norman.

With Roeseler’s latest win, none of us has an any further excuse to remain on the couch, regardless of age. Let’s all start training. The SCORE Baja 400 is Sept. 14-19 and the 1000 is Nov. 15-20, both in Ensenada, just across the border. No more excuses. Thanks, Larry!