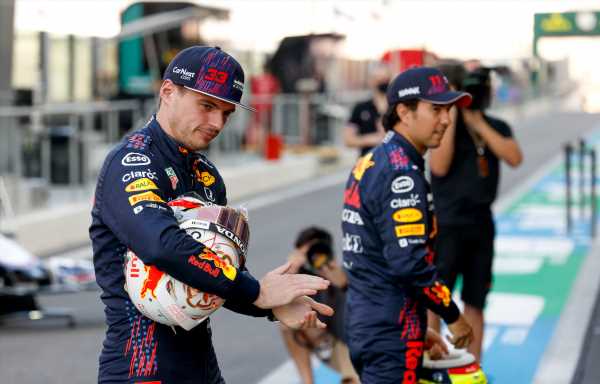 It was Max Verstappen versus Lewis Hamilton for P1 in the very first practice for the Abu Dhabi GP with the Red Bull driver coming out on top.

For the 22nd time this season, Verstappen and Hamilton ventured out of their respective garages for the start of a grand prix weekend.

Never before, though, had so much been riding on a practice session as this weekend Formula 1 will crown its 2021 World Champion. Will it be Verstappen for the first time, or Hamilton for the eighth?

The last dance for the RB16B 🔥😍 #AbuDhabiGP 🇦🇪 pic.twitter.com/tasMYwoNjS

The session started with the soon-to-be-retired Kimi Raikkonen posting the opening lap time around the Yas Marina circuit, a 1:28.8, but that was quickly beaten by Hamilton.

The Mercedes driver hit the front while Verstappen complained about his steering being “quite badly right-hand side down”.

It didn’t seem to bother him too much, if at all, the Dutchman clocking a time that was seven-tenths faster than Hamilton’s opening gambit. Hamilton hit back, up by three-tenths, and so it went.

The two traded blows throughout the 60-minute session with a brief cameo from Fernando Alonso, but he was the only driver other than the two title protagonists to hit the front.

FP1 ended with Verstappen up in P1, the Dutchman – with his steering sorted out by Red Bull – having posted a best time of 1:25.009 on a set of the soft Pirelli tyres.

Hamilton did clock a time that was 0.033s slower than Verstappen’s only to lose it for exceeding track limits at Turn 16. He finished the session P3, behind Verstappen and Valtteri Bottas.

Earlier in FP1 Bottas had been the first driver to exceed track limits, losing his opening lap time as a result.

He asked Mercedes where he’d gone wrong: “What’s the track limit, is it white line?” He was told yes, around the entire circuit.

Nicholas Latifi joined the list, falling foul at Turn 16 as he got an armful of opposite lock exiting the final corner. Lando Norris also had his time deleted, and then another, and then another.

Sergio Perez was fourth quickest in the Red Bull, finishing ahead of Yuki Tsunoda, Alonso and Pierre Gasly.

Ferrari did not have the best start to the weekend, Charles Leclerc not setting a time in the opening 25 minutes as he was back in the pits after two laps for a rear wing change.

The Monégasque driver, running helmet cam, also had a moment with one of the Red Bulls.

His team-mate Carlos Sainz also spent time in the garage, informing Ferrari that something wasn’t right but short on the details.

Sainz made it back out for the final 20 minutes, finishing with the ninth fastest time, one place behind Leclerc.

Meanwhile Raikkonen was the first to fall foul of the reconfigured Turn 9 banked hairpin, losing the rear end of his Alfa Romeo and sliding off backwards.

Esteban Ocon’s Alpine hit “neutral” leaving the driver to ask what can he do to sort it out. Alpine guided him through the process, the Frenchman back on his way and up to ninth place.

Jack Aitken, in the Williams in place of George Russell just for FP1, finished 17th quickest.