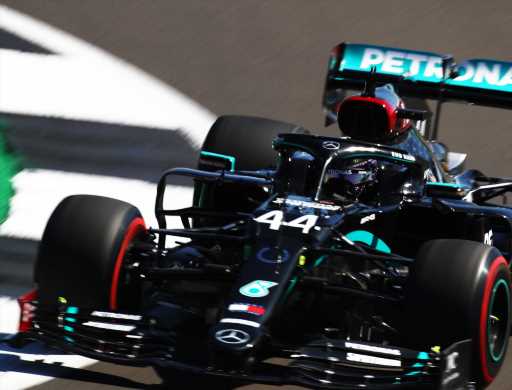 Soft versus medium tyres was the talk of final practice as Lewis Hamilton and Valtteri Bottas seemed to deliberately go a bit slower in sector one to save their reds, and go quickest.

After a morning of appeals and biting comments, Formula 1’s on-track action took centre stage with the controversy surrounding the Racing Point verdict put on the backburner.

Following Friday’s engine failure, Sebastian Vettel was the first man out on track on Saturday as he did an installation lap to ensure that everything was working with his new ICE, turbo and MGU-H.

“This is also penalty free as we have not exceeded the number of components allowed in the regulations,” said Ferrari.

FP3 is underway and Seb is the first driver to head out on track! 🏁#F170 🇬🇧 #Vettel #SV5 pic.twitter.com/MFmGnY8seG

Lando Norris clocked the first lap time of the session, a 1:29.236 with his team-mate Carlos Sainz slotting into second place.

Norris upped his place, breaking into the 1:28s before Leclerc took P1 off him by 0.03s with Vettel going third. They were the only four drivers to set times in the first 20 minutes.

As the track temperature climbed to 36’C, the asphalt and the action heated up.

Lance Stroll, racing his controversial rear brake ducts, laid down a purple middle sector to hit the front with ah 1:28.202.

Hamilton and Max Verstappen were the last two drivers to leave the pits with Hamilton’s extremely slow out lap a sign of how much the drivers are having to nurse the soft Pirellis in order to preserve them.

A small lock up in the first corner cost him a couple of tenths with the reigning World Champion then going purple in the middle sector. He jumped up to second, 0.017s down on his team-mate.

Verstappen went third, 0.193s off the pace with Pierre Gasly in the AlphaTauri fourth at the midway point.

Some fine-tuning to be had in FP3, getting ready for those flying laps 💪 #AlphaTauri #F1 #F170 🇬🇧 pic.twitter.com/0JIwbaDlRB

Verstappen followed up his flying lap with two extremely slow cooldown laps before going for another flying lap while Hamilton overhauled his team-mate with a 1:27.280.

Nico Hulkenberg moved up to fourth place while Stroll was sixth ahead of Esteban Ocon and Alexander Albon.

It was all change, though, with 20 minutes to go as Norris went fastest in the first and final sector on the medium tyre to hit the front with a 1:27.202. That put him 0.078s up Hamilton. Sainz on the soft tyre could only manage P6.

Alas Norris’ time on the top didn’t last long with the McLaren driver losing out to first Bottas and then Hamilton. Bottas on the soft tyres clocked a 1:26.784 before Hamilton did a 1:26.621. The gap between the team-mates was 0.163s.

Verstappen had a moment with a slow Stroll that had the Dutchman swearing and the Racing Point driver under investigation by the stewards.

Name a more iconic duo than Max Verstappen and getting blocked on hot laps, I dare you #F170 pic.twitter.com/fcMYjxxv0D

With traffic causing chaos in the final few minutes, Norris held onto third place behind the Mercedes drivers and ahead of the Racing Points of Hulkenberg and Stroll.

Leclerc was sixth with Verstappen, Albon, Ocon, and Sainz completing the top ten.