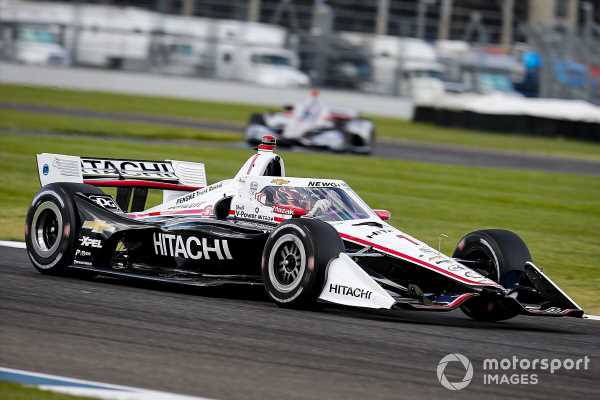 Colton Herta’s Andretti Autosport-Honda took the lead at Turn 1 from polesitter Rinus VeeKay in the Ed Carpenter Racing-Chevrolet at the start, leaving the Team Penske-Chevrolets of Josef Newgarden and Will Power in third and fourth.

Herta on the harder Firestone primaries could not get away from VeeKay, however and the ECR car passed him into Turn 8 on Lap 2.

Behind this quartet, primary-tired Rossi moved up from eighth to squeeze past teammate Marco Andretti and the Meyer Shank Racing-Honda of Jack Harvey.

Champion elect Scott Dixon had lost a spot but by Lap 3 had moved back up to 12th but then lost the spot to Santino Ferrucci’s Dale Coyne Racing/Vasser-Sullivan Honda.

His teammate, by contrast, had missed out at the start but then made strong progress, moving past Harvey and Andretti to grab sixth by Lap 6. Behind Harvey ran Pato O’Ward’s Arrow McLaren SP in ninth, Ryan Hunter-Reay (Andretti) in 10th. On Lap 7, both Ferrucci and Dixon passed Max Chilton’s Carlin entry to complete the top dozen. But Ferrucci and Hunter-Reay then tangled in Turn 1 on Lap 10, the pair of them sliding onto the grass.

By this time, VeeKay had pulled a 4.8sec margin over Herta who was coming under pressure from Newgarden, who in turn had a 2.1sec margin over Power. Their teammate Simon Pagenaud, trying to climb from 22nd on the grid, pitted on Lap 8 to get off his primaries and onto the softer alternate compounds.

Hunter-Reay took the opportunity of his spin to also stop early, and teammate Herta pitted from second on Lap 13. Both took on red tires. The following lap, Dixon replicated the move.

Up front, VeeKay’s lead was having his lead chiseled away by Newgarden, his advantage dropping under four seconds by Lap 16 as he encountered traffic, and so ECR brought VeeKay into the pits and was put onto primary tires. VeeKay emerged well ahead of Herta, but the Andretti driver on reds quickly closed down that gap.

Into Turn 1 on Lap 21, Herta made the move but VeeKay stayed alongside him and clung onto the lead for the next three corners. Finally, at the end of the straight at Turn 7, Herta made it stick and grabbed the lead.

Newgarden pitted on Lap 22 to take on his primaries, and he emerged ahead of Herta. The Andretti driver began pressuring Newgarden hard on Lap 23, and on Lap 24 he dived past Newgarden at Turn 1 to snatch the lead.

Power, who had pitted on the same lap as Newgarden, albeit seven seconds behind, then lost several places in the pits as his right-front wheelnut couldn’t be removed for several seconds. That dropped him to seventh, 22sec behind leader Herta, with Newgarden, VeeKay, Rossi, Rosenqvist, and Dixon between them.

Rosenqvist allowed Dixon past him and into fifth on Lap 28, 16sec behind leader Herta.

On Lap 35, Herta’s advantage over Newgarden was 2.8sec, while VeeKay was only 4.5sec further back, a good effort for two primary-tired cars. Two laps later, Herta pitted, and again Newgarden stayed out, even as the other principal players pulled in over the next couple of laps.

Finally Newgarden stopped on Lap 43 while holding a 38sec margin over Herta, and emerged 3.7sec behind.

Dixon lost but survived a tough four-lap duel with Rossi – caution was the better part of valor for the champion elect on this day – but the pair of them were passed by the recovering Power into Turn 1 on Lap 46. The three-time GP Indy winner then started hunting down Rosenqvist in fourth and on primary tires.

Also impressing was the #1 Penske of Newgarden, who had reduced his deficit to Herta to under two seconds by Lap 48, and had simultaneously pulled eight seconds on VeeKay. By halfway through the stint, Herta was radioing to his team that his rear tires were going away and decided they would take on primaries for his final stint.

Also working in Newgarden’s favor was that Dixon was strugglingk having flat-spotted his tires in his battle with Rossi. The five-time champion fell to eighth behind Graham Rahal’s Rahal Letterman Lanigan-Honda on Lap 53.

On Lap 56, Newgarden had trimmed Herta’s advantage to one second.

Pagenaud, who had been running 16th, was the first to make his final scheduled stop on lap 60. Then Herta missed his braking point while under pressure from Newgarden, and went straight on at the end of the pitstraight, prompting him to stop. Next time by, now with a handy margin, Newgarden pitted for primaries, like Herta and came out 3.2sec ahead, and the rest of the leaders stopped. The driver who lost out through the pitstop exchange was VeeKay who fell behind Rosenqvist and Power. In his favor was that he was now on the softer alternates, like Rosenqvist, whereas Power was on blacks.

Also joining that fight was Rossi and the late-stopping Graham Rahal. Power had a monumental slide exiting the final turn, somehow keeping it off the wall, but allowing VeeKay and Rossi to get ahead. Rossi then took advantage of the fact that VeeKay had no push-to-pass and passed the Dutchman at the end of the pitstraight.

While Newgarden looked serene with an eight second lead, Herta was coming under pressure from his rookie rival from 2019, Rosenqvist who not only had the faster tire compound but was also not having to do any fuel saving. Their side-by-side battle on Lap 75 cost them time and dropped them into the sights of Rossi.

A similar battle had emerged further back, where Dixon on fresh tires had passed Rahal for seventh and zoomed in on hard-tired Power who, like Rahal, was now out of push-to-pass.

Rossi passed Rosenqvist for third at Turn 1 on Lap 79, and that allowed VeeKay onto the Ganassi driver’s tail, but neither of them had any push-to-pass boost left. On Lap 80, Rossi passed Herta around the outside at the end of the back straight to grab second, and seconds later, immediately behind them, VeeKay grabbed fourth from Rosenqvist. The Dutchman maintained his momentum, stalked Herta and finally dived inside him at Turn 11, successfully nabbing third.

After having been robustly rebuffed by Power with three of laps to go, Dixon came under intense pressure from Rahal and Harvey, and on the penultimate lap, the championship leader slid off the track at Turn 7, and dropped to ninth.

Rossi finished second some 14sec behind Newgarden, with VeeKay just 0.75sec further back and scoring the first podium of his career.