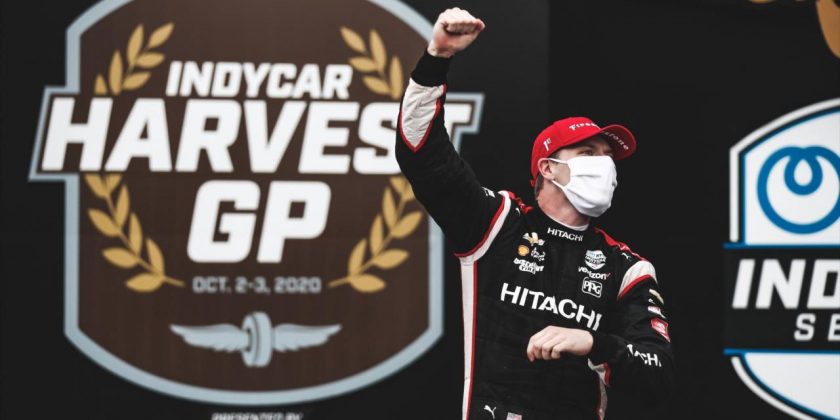 Josef Newgarden accomplished everything he set out to accomplish in keeping his NTT IndyCar Series championship ambitions alive and got a little bit of help from Scott Dixon too.

The reigning champion from Team Penske chipped away at his points deficit with a statement victory in Race 1 of the Harvest Grand Prix on Friday at the Indianapolis Motor Speedway Road Course. Newgarden did so by 14 seconds over Alexander Rossi with pole-sitter Rinus VeeKay completing the podium.

Dixon entered the race with a sizeable championship lead, but could only muster a ninth-place finish, a 32-point difference. As a result, Newgarden now trails by just 40 points with two races remaining – tomorrow and Oct. 25.

“We had a rocket ship,” said Newgarden from victory lane. “I knew we did yesterday in qualifying. I was so surprised by how quick the car was. It was a great fight today. It was strategy, it was close combat, it was everything you wanted in an IndyCar race, and I had the quickest car.

“Team Chevy did an amazing job. Having Hitachi has been good luck for us this year. I’m pumped to be up here. I’ve always wanted to get up here. I want to get up here during the ‘500,’ but this is cool.”

Newgarden is still a longshot to complete the comeback, but a similar result on Saturday would cut Dixon’s championship lead to single digits. The championship lead was 72 entering this weekend. That’s how quickly things can change over the next two races.

“If you’d given us a couple of those races where we caught the bad yellows, we’d really be in this fight,” Newgarden added. “It’s almost a shame what kind of deficit we have in the points, but this team has been unbelievable.

“They’ve been the quickest on pit lane all year. They’ve done a great job, a really great job. They deserve to be in this championship fight. So, it’s still a bit of a hill. We made it smaller, which is really good news. But I’ve said we’ve got to have three perfect races to the finish, and this is one of them down. We’ve got two to go.”

The results were a byproduct of Dixon qualifying 12th with Newgarden landing on the front row. Dixon spent most of the race mired in lapped traffic and even made yet another race mistake late in the race, losing two spots when he drove off-course with two laps remaining.

Independent of the championship fight, Newgarden capped a special day for Team Penske and Penske Entertainment Group, which opened Indianapolis Motor Speedway to fans for the first time since the start of the pandemic and its stewardship of the facility.

Roger Penske and track president J. Douglas Boles welcomed the reduced capacity crowd to the speedway themselves, opening the gates in person on Thursday afternoon in advance of track activity.

“I don’t think I can think about the race, I’m so excited to be up here on this platform,” Newgarden said. “I wish I was up here with ‘The Captain.’ (Penske has) done such an amazing job with this facility, and to see people back here socially distanced in the stands at least getting to watch a race, I’m sure he’s really happy today, and I’m happy to be up here representing him and Team Penske, everyone at IndyCar”, IMS. Thank you to everyone that came out.”

The race did not feature any cautions, and the only driver who failed to finish was Marco Andretti of Andretti Autosport, who was forced to retire late with a mechanical issue.

Can Josef Newgarden complete the comeback over the next two races? Tell us in the comments section below.